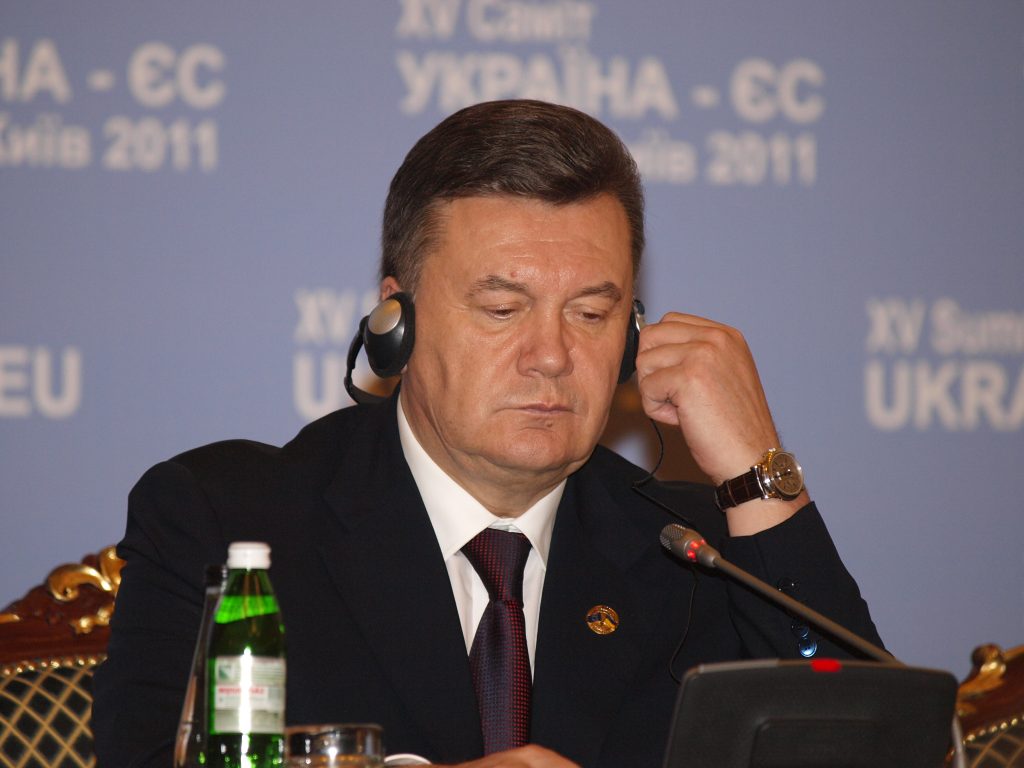 The trial of former Ukrainian President Viktor Yanukovych has started in the Obołoński District Court of Kiev. He is accused of treason and the attempt against the territorial integrity of the country. There are ongoing hearings of witnesses. They may not only have an influence on the sentence for the former President – he faces a life imprisonment – but they can also reveal the backstage events that took place in Kiev in February 2014.

On January 24, the Chairman of the Verkhovna Rada of Ukraine Andriy Parubiy appeared in the court together with the former Prime Minister of Crimea, Anatolii Mohyliov. Former security guards of President Yanukovych, who were present during his escape from Ukraine, testified a day later.
According to the prosecutor’s office, Viktor Yanukovych appealed to the authorities of the Russian Federation to bring Russian troops into Ukraine in March 2014.

The Russian Ministry for Foreign Affairs confirmed the veracity of this information in March 2017. A copy of the documentary evidence was shown during the UN Security Council in March 2014 by the then Russian representative Vitaly Churkin.

According to the prosecutor’s office, Yanukovych tried to create a legal basis for the use of the Russian army to occupy a part of the territory of Ukraine.

The court hearings may give some more information about what was happening in Ukraine at the end of the Maidan protests in February 2014 and reveal the backstage events of the Russian annexation of Crimea.

On January 24, the chairman of the Verkhovna Rada of Ukraine Andriy Parubiy testified in the court. In his opinion, Viktor Yanukovych was under Russian influence from the beginning of his presidency, that is from 2010.

A turn initiated by the former President on the issue of NATO membership seems to prove it. Under the influence of Yanukovych, Verkhovna Rada adopted the Ukrainian foreign policy priorities law, including a clause of the “neutral status” of Ukraine. According to the witness, the next step was the signing by Yanukovych the so-called Kharkiv Pact in 2010.

Parubiy also talked about the events that took place at the end of February 2014, when the Russian operation in Crimea began. On February 27, 2014, he was appointed Secretary of the National Security and Defense Council of Ukraine.

– We understood that we had to be ready for any scenario of Russia’s aggression, also the most critical one: an attack on Ukraine carried out from various directions – said Parubiy.

An interesting fact he testified was the telephone conversation he had had with Vladimir Zhirinovsky at the end of February 2014. Parubiy did not remember the exact date of the conversation. The Russian politician called Parubiy and threatened that if Ukraine were to “actively defend its sovereignty and territorial integrity”, Russia could bring army units on Ukrainian territory. Moreover, Zhirinovsky warned Parubiy that Russia could initiate criminal proceedings against him and “take actions that would threaten his life.”
The Chairman of the Verkhovna Rada also answered questions about Crimea, Yanukovych’s escape and events during and after the Maidan protests. Parubiy headed the Self-Défense of Maidan during the protests in Kiev at the turn of 2013 and 2014. He testified that he did not notice if participants of the protests had any weapons.

The most interesting statement concerned the Right Sector situation after the end of Maidan protests. On April 1, 2014, thanks to Parubiy’s mediation, the Right Sector agreed to leave hotel “Dnipro” in the centre of Kiev and move to one of the Security Service bases in the capital of Ukraine.

The Minister for Internal Affairs Arsen Avakov and the Head of Security Service of Ukraine Valentyn Nalyvaichenko took part in those negotiations. A question was asked about the participation of the Right Sector in defending the country and subjecting of the organization to the law enforcement representatives. However, the representatives of the nationalist group did not want to join the National Guard, which was organized by the Ministry for Internal Affairs.

– They agreed to undergo training sessions at the SBU base. The current member of a parliament Boryslav Bereza (…) took part in these talks. We agreed that the Head of the Security Service would provide the base for the Right Sector training so that they could join the SBU units – said Parubiy.

That is how the Chairman of the Parliament confirmed that the Right Sector cooperated with the Special Security forces of Ukraine during the war in Donbas.

The last Prime Minister of Crimea

On January 24, Anatolii Mohyliov, who was the Prime Minister of Crimea at the start of the Russian operation, was also interrogated in the case of Yanukovich.

His testimonies could have been one of the most interesting moments of the trial and shed some light on the backstage events of the last week of February 2014, when Ukrainian government buildings were taken over by armed Russians. Unfortunately, the former Prime Minister did not say much, and the prosecutor himself was not inquisitive enough.

Mohyliov only stated that no “understandable instructions” regarding the possible reaction to this situation came from Kiev after taking over the administrative buildings in Simferopol on 26 February 2014.

Former Prime Minister of Crimea pointed out that it was not possible to determine the origin of people who had taken the buildings of the state administration because their uniforms did not have any markings. – It is known that they had pro-Russian views. However, I do not have any evidence that they represented army forces of a particular state – Mohyliov added.

He learned from the media that they were Russian military.

Mohyliov also told about his last meeting with Viktor Yanukovich, which took place on February 21, 2014 at the headquarters of the presidential administration in Kiev.
– Yanukovych said his life was in danger and there were many armed people, many illegal military formations in Kiev, so he had to leave the capital of Ukraine – former Prime Minister said in a court.

The bodyguards were till the end

However, Mohyliov was not one of the last people who saw Yanukovych before his escape to Russia. On January 25, two of former President’s bodyguards: Olesia Szaran and Vyacheslav Kozlov, testified in a court. They were employees of the State Security Board and they accompanied Yanukovych until February 24, 2014.

The prosecutor’s office claims that Yanukovych escaped to Russia from his residence in Mezhyhirya. His getaway provided a basis for his removal from President’s Office and the appointment of Oleksandr Turchynov as an acting President.

On the other hand, the defence attorney claims that Yanukovych did not escape from Mezhyhirya. Performing his presidential duties, he went to Kharkov first and then to Crimea.

The bodyguards’ testimony did not reveal anything new. Yanukovych’s escape route was known earlier. Anyway, some interesting details came into the light thanks to the people who accompanied Yanukovych in his last days in Ukraine.

Most information about the last days before Yanukovych’s escape and about his movements was given by Oles Szaran, who was responsible for the President’s security during his travels.

According to the security guard, the President and his security flew by two helicopters from the Mezhyhirya mansion to Kharkov on February 21, 2014, at approximately 10 pm. At the same time President’s things, including the paintings, were packed into the trucks.

When Yanukovych arrived in Kharkov, he met the former Governor of Kharkov Oblast Mykhailo Dobkin. Ukrainian President spent a night in a residence belonging to the Oblast administration and flew to Donetsk the following day. During the flight, air traffic controllers tried to return the helicopters to Kharkov, threatening to use some means forcing the landing.

Yanukovich, however, managed to land in Donetsk. Two Falcon planes were waiting for him and his men at the airport there, but the State Border Guard Service of Ukraine did not allow the planes to take off.

According to Szaran’s story, Yanukovych went to an unknown residence in Donetsk. It was probably the residence of an oligarch Rinat Akhmetov.

In the evening, security guards were ordered to hand over the cell phones and then they accompanied Yanukovych on his way to Crimea. They were driving two cars. During the ride the head of security received an information that an attempt to stop the column could be made near the city of Melitopol. The cars turned back and took backroads having their lights switched off. At 3:00am in the morning of 24 February, the column reached the clearing, where three helicopters waited for Yanukovych and his staff.

– Helicopters were of military type, without any air recognition symbols. I think they were Russian Federation helicopters – added Szaran.

The witness did not know the territory where the helicopters landed. Yanukovych and his people crossed over to the next plane. There was a group of unknown armed people on the board. The plane, due to some technical problems, landed at another unknown airport, where all of them changed the plane for the second time.

On February 24, around noon, they landed in Crimea. According to the bodyguard’s account, it was a Russian base. Thirty soldiers in Russian uniforms waited for them. Yanukovych went to Yalta, a sanatorium belonging to the Black Sea fleet of Russia. Later he went to the Russian base in Sevastopol.

– Late in the evening the President found us in the square, thanked us for the service and asked who wanted to go further with him. Those who decided, wrote applications for relieved of duty and checked their weapon. Then Yanukovych went in an unknown direction. We did not see him anymore – said Szaran.