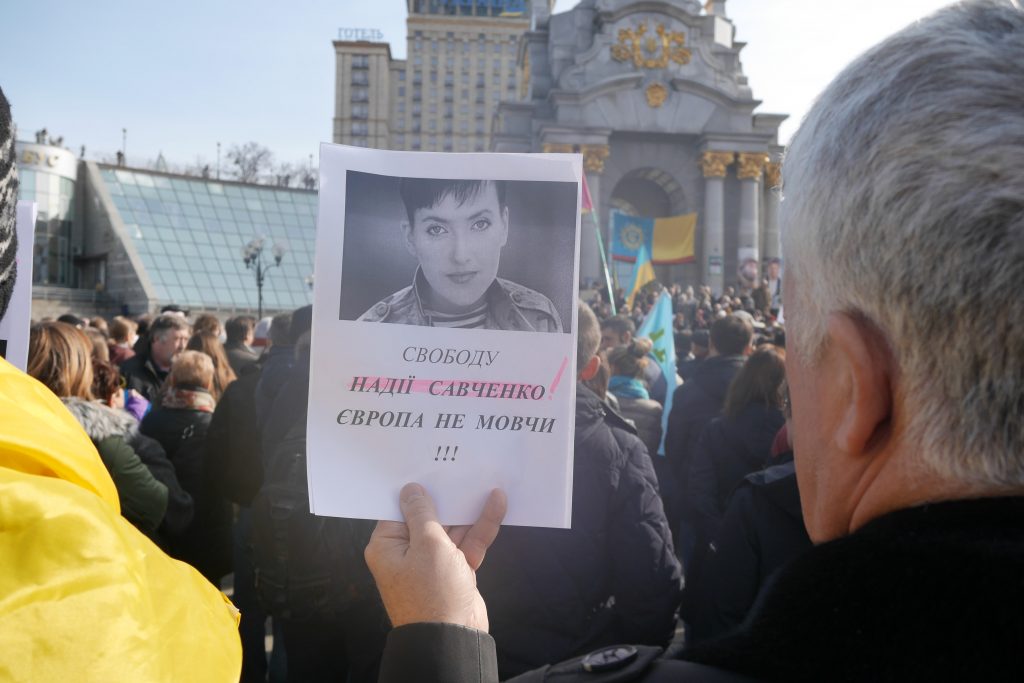 Was Savchenko planning to overthrow the Ukrainian authorities?

Nadiya Savchenko, a deputy and Ukraine’s hero, will remain in custody until May 20. She is accused of conspiring, planning terrorist attacks and a possible coup. However, Savchenko did not stop her political activity after being arrested, as some people predicted. On March 22, when Savchenko was detained, News One TV station began broadcasting an advertising video promoting her election campaign. Presidential election in Ukraine will be held in 2019.

The film has also appeared in social media sites. It is not known when it was produced, but the start of its broadcast is not accidental. – One should plan ahead… I know what to do. I have decided to act. The time will come, and I will run for President of Ukraine. But I need your decision today – says Savchenko in the advertising film, while taking off embroidered shirt and wearing a military uniform.

News One TV station, which broadcasts Savchenko’s advertisement, is owned by Yevhen Murayev. He is also a deputy of the Verkhovna Rada of Ukraine. During the presidency of Viktor Yanukovych, he had been a member of the Party of Regions, and later he belonged to the Opposition Bloc, formed after the collapse of the Party of Regions. Savchenko often appeared in News One TV, and after her detention, Murayev promised to give her legal and media support.

On March 27, Larysa Sargan, Prosecutor General spokesman, wrote on Twitter on behalf of her boss Yuri Lutsenko, that the investigation will last for about 2 to 3 months. Thus, the process of the Ukraine’s hero may begin in July. And prosecutor’s office charges are serious.

Savchenko case is related to the case of Volodymyr Ruban, the Head of the officer corps. On March 8, he was detained by the Ukrainian Security Service (SBU) near the demarcation line in Donbas, while he was transporting weapons and explosives from pro-Russian fighters’ territories.

Savchenko publicly expressed support for the arrested Ruban. In 2017 they illegally travelled to Donetsk together. It soon turned out that the SBU wanted to interrogate Savchenko on Ruban. On March 15, the Prosecutor General Yuriy Lutsenko applied a motion in Verkhovna Rada to waive Savchenko’s immunity in order to hold her criminally responsible. While speaking in Verkhovna Rada, Lutsenko accused her of planning terrorist acts: firing Parliament building and assassinations of Ukrainian politicians, including the President.

On March 22, before the parliamentary vote on the waiver of immunity and giving an agreement to the detention of Savchenko, the Prosecutor General read the content of the motion. According to the evidence collected by the investigators, Savchenko and Ruban planned to fire on the building of Parliament with a mortar set on one of the islands on the Dnieper River. Yuriy Lutsenko added that not only deputies would be killed. There would also be random victims. When Lutsenko was presenting the Prosecutor’s Office motion, Savchenko was standing right in front of him. Earlier she had tried to defend herself claiming that the whole plot was an act of provocation. She wanted to embarrass SBU and the authorities. Lutsenko replied – The highest penalty is planned for those who would like to check the finest reliability of the SBU.

Then a film lasting about 30 minutes was shown. The first part of it contained an audio recording of a conversation between Savchenko and two Ukrainian army officers. It was made last November. Savchenko was accompanied by Volodymyr Ruban and it could be concluded that the conversation took place after they had had a meeting in Donetsk with the leaders of pro-Russian fighters. You can hear Savchenko saying that militants “do not want to talk about ending the conflict as long as Petia [the President of Ukraine Petro Poroshenko, ed.] remains in the office” so “they ask for the change of authorities in Kiev”.

Savchenko also informed the fighters about the opinion of the leader of Donetsk People’s Republic Aleksander Zakharchenko, who asked for “giving him” Oleksandr Turchynov, the Head of National Security and Defense Council of Ukraine.

The next part of the video footage shows a meeting recorded by a hidden camera. It took place in a military unit in Khmelnytsky in December 2017. Savchenko is again accompanied by Ruban and two Ukrainian officers. One can guess the soldiers were in cooperation with SBU. This time, the conversation is clearly described by the General Prosecutor’s Office as “plans to overthrow the Ukrainian authorities.” The officers ask Savchenko and Ruban about the next planned steps of the operation. They point out the situation is serious after the “gifts came in” [the first transport of weapons – according to operational materials of SBU. Ruban smuggled it from the area of ​​the Donetsk People’s Republic to the territory of Ukraine last November, ed.]. Ruban says the operation plan consists of three stages. First stage means “driving out” the inhabitants of Kiev on the streets. The second stage is to blow up the Parliament, and the third is to “expel” Petro Poroshenko “if he did not escape himself”.

The members of the meeting agreed that Poroshenko, Turchynov and the Minister of Internal Affairs, Arsen Avakov, should be removed. And between 200 to 300 hundred “mad men” are needed to carry out that whole operation.

During the movie screening Savchenko was looking at different deputies. After the film she took the floor and holding the Hero of Ukraine order in one hand and the deputy pass in the other she claimed that, in contrary to the opinions of some, she did not intend to hand over the distinctions she got for fighting the “Moscow state” when she was kept in its prisons.

None of the leaders of the parliamentary factions defended her. The evidence prepared by the Prosecutor General convinced the deputies. They waived Savchenko’s immunity, voted for her detention and arrest.

Savchenko managed to leave the Parliament, talk to her mother, sister and her supporters. When she returned to the building of the Verkhovna Rada of Ukraine, she was officially detained by an SBU officer. Everything went smoothly. She requested to go on foot to the headquarters of SBU, where she was interrogated. On March 23, the court decided to arrest her until May 20.

Once a hero, now a terrorist…

Born in 1981 in Kiev, Nadiya Savchenko wanted to become a military pilot since childhood. After graduation, she signed a contract with the Ukrainian army. She took part in the Ukrainian military mission in Iraq, spending there six months between 2004 and 2005. After completing her mission, she started studying at the Kharkiv University of Air Force. The then Minister of Defence was personally to grant her permission for education. She was removed twice from the students’ list, but eventually she managed to graduate. However, she did not become a pilot but a navigator of Mi-24 attack helicopter. She took part in protests during the Euromaidan in Kiev.

When the war broke out in the east of the country, Savchenko, an officer of the Armed Forces of Ukraine, took vacation twice and started to fight as a volunteer. On June 17, 2014, she was taken hostage by pro-Russian militants near Lugansk. At the beginning of July 2014, she was moved to Russia and arrested. Savchenko was accused of directing the artillery fire in eastern Ukraine in which two Russian journalists died. Russian Human Rights Organization considered her as a political prisoner. Finally, on 22 March 2016, Russian court sentenced her to 22 years in prison. At the same time, the negotiations and a public campaign for her release were under way. On May 25, 2016, she was exchanged for two soldiers of Russian Special Forces (Spetsnaz) and returned to Kiev. She was greeted as a national hero.

When Savchenko came back to her homeland, she almost immediately entered politics. Yulia Tymoschenko, the leader of the All-Ukrainian Union “Fatherland” party, placed Savchenko first in the electoral list of her party. Savchenko entered the Parliament. Two weeks after returning to the country she stated that Kiev should talk directly to the leaders of the separatist republics and she is ready to hold such talks. It provoked mixed reactions. People in Ukraine believe the leaders of the Donetsk People’s Republic are just Moscow’s puppets and Russia is responsible for the whole conflict.

After few months of parliamentary work, Savchenko left the “Fatherland” party and began an independent political activity. In December 2016, she met in Minsk with the then leaders of the Donetsk People’s Republic and the Lugansk People’s Republic. A year passed, and it turned out that she illegally travelled to the areas controlled by the pro-Russian militants. She claims she was doing all this in the sake of ending the war.