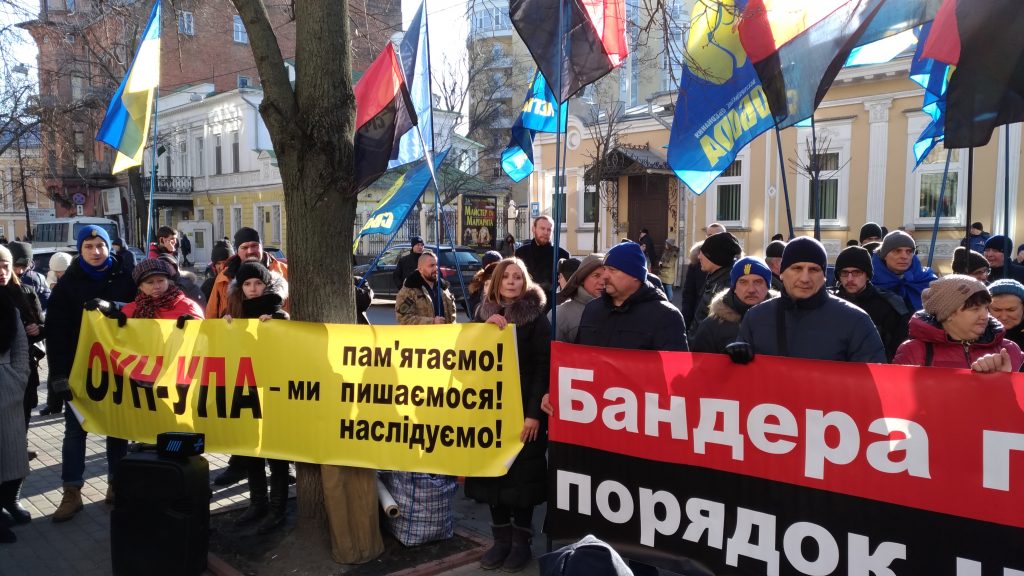 Ukrainian commentators believe that the Polish authorities have lost their geopolitical awareness. Many of them think that Poland has come so far in the changes concerning historical policy because Polish authorities favour a “third party” – interested in dismantling Polish-Ukrainian relationships and weakening both neighbouring states.

The tension in Polish-Ukrainian relations increased at the beginning of February. On February 6, the President Andrzej Duda signed the amendment to the law on the Institute of National Remembrance (IPN). The amendment had earlier been passed by the Polish Parliament and the Senate. It was a serious blow to Polish political relations with Israel, Ukraine and the USA.

The Ukrainians carefully monitored the events happening between Warsaw, Tel-Aviv and Washington after the President had signed the amendment.

Ukrainian politicians believed they did not stand alone when it came to make their point. However, Kiev adopted the tactics of a balanced (“asymmetric”) political strategy. On the one hand Kiev was emphasizing “Ukrainians’ right to their history” and was paying attention to the ongoing war, “the defence of Europe, including Poland, against the common enemy – Russia”. It meant the need for pragmatic cooperation on energy, security and defence issues.

On January 26, the Ministry of Foreign Affairs of Ukraine published a statement expressing concern over the amendment to the law on the Institute of National Remembrance passed by the Polish Parliament. The Ukrainian side indicated that “issues concerning Ukraine are once again used in Polish internal politics, and the tragic past of mutual relationships is still politicized.”

At the same time, Ukrainian diplomats emphasized “extraordinary concern about the intention of showing Ukrainians only as “criminal nationalists” and “the Third Reich collaborators”.

The Verkhovna Rada of Ukraine, in a resolution adopted with 242 votes, expressed “disappointment and deep concern with the decision taken by the Polish Parliament on 26 January and the decision taken by the Senate of the Republic of Poland on 1 February 2018 regarding the amendments to the law on the Institute of National Remembrance …”. According to Ukrainian MPs, “open dialogue, free exchange of ideas and academic freedom cannot be threatened by criminal persecution, because it is not in compliance with the democratic values.”

The Ukrainian Parliament has opposed “the policy of double standards and imposing the collective responsibility of Ukrainian people”. It also pointed out that “heating up the conflict between Polish and Ukrainian nations should be in the interests of […] the Russian aggressor and occupier”.

The Deputies also expressed their concern about the policy supporting the development of an anti-Ukrainian atmosphere. It could “directly affect the rights and freedom of almost a million Ukrainians who are currently economic migrants in Poland”.

The resolution of the Ukrainian Parliament is a confirmation that Kiev authorities’ chose the “asymmetric” response to the actions of Polish Parliament, the President and the government. However, there are also supporters of a more severe reaction among Ukrainian politicians.

The Speaker pro tempore of the Ukrainian Parliament, Oksana Syroyid, who represents the Self Reliance party, declared that the Ukrainian authorities – the President, the Ministry of Foreign Affairs and the Parliament – should react more firmly. In her opinion, Kiev should call his ambassador in for a consult.

– I suspect this is a consequently aggressive policy against Ukraine. I ask myself why Polish policy is becoming more and more chauvinistic? I don’t really have the answer right now – claimed Syroyid on Channel 5 television station.

The populists and the nationalists

The populists Radical Party is also the one trying to make political capital on Polish-Ukrainian relationships. On February 9, the party organized a picket in front of the Polish Parliament in Warsaw. The Radical Party leader Oleh Lyashko, together with the entire parliamentary party’s faction, took part in this political event.

“At that very moment, our faction is picketing in front of the Houses of the Parliament of the Republic of Poland in Warsaw with the demand to delete the anti-Ukrainian law and stop pursuing a hateful policy towards Ukrainians. It is beneficial for Moscow and it turns our nations against each other” – wrote Lyashko on his Facebook account.

The picket was primarily to serve as a “picture” for the Ukrainian media.

On the other hand, on February 5 the nationalists from the All Ukrainian Union “Svoboda” party, the National Corps and some other groups organized pickets near the Polish diplomatic missions in Ukraine.

About 100 people attended the assembly in front of the embassy in Kiev. The protesters were holding the flags of the “Svoboda” party, the National Corps and some red-and-black flags: the colours of the Ukrainian nationalists.

There were also banners with inscriptions: “OUN-UPA, remember, respect, emulate”, “When Bandera comes – the order is established” and “The occupants of western Ukraine 1918-39 – you will be judged”.

The representatives of the “Svoboda” party pointed out that Poland is “putting a knife in the back” of Ukraine, when Ukraine fights against Russian aggression in the east of the country and defends mutual sovereignty. And if Ukraine loses its independence, then Poland will lose its independence too.

Olyh Kucyn, a commander of the Svoboda Legion fighting in Donbas, underlined that the Ukrainians “would not sink to the level of Poles who destroy Ukrainian graves and build the roads from the tombstones of our soldiers”.

On the other hand, the representative of the National Corps emphasized the need for Polish-Ukrainian co-operation.

– We are very negative about the law changes adopted by the Polish Parliament, but we believe that demagogues are responsible for this, not the Polish nation. The geopolitical concept of Intermarium is important to our party – deputy spokesman of the National Corps, Eduard Jurtschenko, told the Outriders.

Paradoxically, Ukrainian nationalists, usually the enemies of Polish Eurosceptics and nationalists, have now become their allies. Jurtschenko added that “they support Polish fight against the dictate of Brussels”. In return they count on Polish support for their fight against “Putin’s Neo-Bolshevik Russia”.

The National Corps spokesman emphasized that they respect Poles’ right to “their own history”, but at the same time “they cannot agree with the fact that the Poles impose their own vision of history as some elements of it are demeaning to the Ukrainians”.

What will happen next?

The Director of the Ukrainian Institute of National Remembrance, Volodymyr Viatrovych, is against the symmetrical responses from the Ukrainian side. However, he also believes that the amendment to the law on the IPN, signed by President Duda, stops the dialogue between Polish and Ukrainian historians. In his opinion, Ukrainian historians should be aware that their trips to Poland may be too dangerous because of possible criminal sanctions concerning their views.

However, much more dangerous phenomenon can be clearly seen on the background of the last political crisis. It is no longer about the already lost Polish status of the “advocate of Ukraine”. It is about the breakdown of relationships which have been built for many years and have given basis for mutual strategic cooperation. Poland is no longer “a role model” for Ukraine.