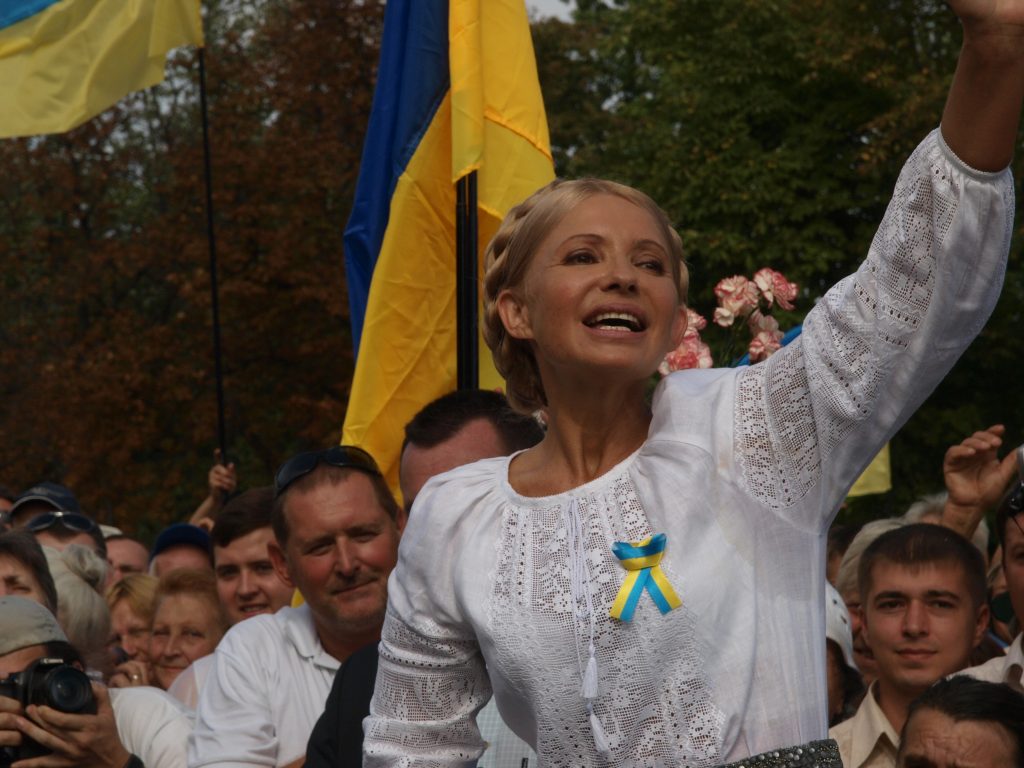 Yulia Tymoshenko’s 2010 presidential campaign may have been financed by Muammar Gaddafi. Ukraine’s National Anti-Corruption Bureau (NABU) has started its investigation on the issue. Moreover, according to “The Guardian”, Paul Manafort, a famous American lobbyist, between 2011 and 2012 ran an operation aimed at discrediting Tymoshenko.

On February 19th, Asharq Al-Awsat newspaper published a piece describing how Muammar Gaddafi had financed presidential campaigns in France, USA and Ukraine. The article reports that Tymoshenko may have received 4 million euro from the now-deceased Libyan leader.

A close associate of Gaddafi’s son said anonymously that he himself, on Muammar Gaddafi’s order, flew the money for Tymoshenko’s campaign in a private jet. “I landed at the airport in Kiev and handed the suitcase with money to Mrs. Tymoshenko herself”, he said.
The press officers of Tymoshenko’s Batkivshchyna political party denied that such a situation had taken place.

The article published by Asharq Al-Awsat mentions Tymoshenko and the former President of France, Nicolas Sarkozy, who had been accused of accepting a much larger sum to finance his 2007 electoral campaign. He is alleged to have received almost 50 million euro from Gaddafi for which he was arrested by the police on March 20th.

The National Anti-Corruption Bureau of Ukraine (NABU) informed that a full investigation will follow if there are signs that Batkivshchyna’s leader had indeed committed a crime.

Tymoshenko on the target

Yulia Tymoshenko was also featured in the recent story by The Guardian which accused the former head of Donald Trump’s campaign, Paul Manafort, of conducting covert operations against Tymoshenko. Over the course of his career, Manafort worked as a political PR expert for the Ukrainian Party of Regions. Among other things, he was in charge of lobbying for Viktor Yanukovych’s interests.

According to the documents analyzed by The Guardian’s journalists, between 2011-2012 Manafort also developed a plan of measures aimed at discrediting Yulia Tymoshenko and bolstering Yanukovich’s image.

In 2011 Tymoshenko was arrested and accused of abuse of office that led to losses in a state-run company Naftohaz. The public opinion in Western Europe found both the arrest and the subsequent process politically orchestrated. The persecution of Tymoshenko, who was the main opponent of Yanukovich, also had a negative backlash on his image.

In 2011, Manafort proposed a plan for discrediting Tymoshenko abroad. According to The Guardian, the person who was assigned the task of preparing specific actions against her was Alan Friedman, known for his cooperation with Wall Street Journal. He was also previously accused of working with Manafort. The details of the operation included rewriting some of the Wikipedia articles, creating a special think-thank in Vienna to spread information in support of Yanukovich’s lobbying and organizing social media activity in Europe and the USA.

In July 2011 Friedman allegedly sent Manafort a document titled Ukraine – the digital road map. It presented a plan for destroying Tymoshenko’s online presence by videos, articles and posts that would show her as an unreasonable, mad and antisemitic. The document suggested rewriting some of the Wikipedia articles in order to show Tymoshenko as corrupt and properly present the course of her lawsuit.
In the spring of 2012, according to the documents published by the British paper, Friedman was supposed to inform the then Ukraine’s Foreign Minister Kostyantyn Gryshchenko that a large number of articles and TV materials had been created in order to present Yanukovych in a positive light. In order to facilitate the distribution of these news, a special fake research center – the Center for the Study of Former Soviet Socialist Republics was created. According to The Guardian, Friedman supposedly created some of these materials himself and signed them as Matthew Lina.

The next presidential election in Ukraine is due in less then a year (it is supposed to take place by the end of March 2019). By Ukrainian standards, it means that the wheels of the presidential campaign are already in motion. 57-year-old Tymoshenko has the lead in all the polls and no one doubts that the upcoming electoral fight will be fierce. Her main competitor is Petro Poroshenko, the current president in office. It is thus hardly surprising that one of the deputies who asked NABU to investigate “Tymoshenko’s Libyan money” was Volodymyr Arjev, a member of Petro Poroshenko Bloc.

Before that, the Poroshenko’s environment was targeting Tymoshenko’s foreign contacts. For years she has polished her image in the West where she still enjoys popularity, especially after suffering through the politically-motivated imprisonment (when Yanukovich was in office). Back then a lot of Western politicians were involved in organizing her release. On February 8th Tymoshenko took part in a National Prayer Breakfast in Washington where she delivered a speech on the leadership in today’s world.

In the same month, the head of President’s Department for Information Policy revealed that the leader of Batkivshchyna party spent 1.8 million dollars on American lobbyists in the last four years. Enquired by the journalists, Tymoshenko herself didn’t want to reveal the source of the money spent on American experts. A Washington-based newspaper Hill in March published an article describing a new contract signed in behalf of Tymoshenko with the American lobbyists who used to work for Donald Trump.

According to the documents passed to the US Ministry of Justice by a company called Avenue Strategies, a monthly cost of lobbying services for Tymoshenko is 65,000 USD. The contract was signed for a period from February to August 2018 with an option to extend it. The agreement includes facilitating contacts with the US government, members of Congress, organizing research and strategic consultation as well as the organization of Tymoshenko’s visits in the USA. The head of the Avenue Strategies company is Barry Bennett, a former advisor of Donald Trump’s campaign. Tymoshenko declared that she does not know Bennett and has no knowledge of hiring this company.

In March this year Tymoshenko, along other politicians and officials, filed an electronic tax declaration. In comparison to others, her fortune looks really modest. The leader of the Batkivshchyna party declared an income of over 21,500 USD while her husband earned almost 140,000 USD. She also claims to have 24,000 USD in bank deposits and 11,000 USD in cash. As a leader of one of the biggest Ukrainian political parties, she does not have her own house and rents one near Kiev with an area of 588 square meters.

Before Tymoshenko went to politics, she was active in large-scale business. In mid-90s she was the head of a company called United Energy Systems of Ukraine which was then the leader of the Ukrainian fuel market. Its annual turnover, according to unconfirmed sources, could have amounted to 11 billion dollars. In the second part of the 90s Tymoshenko abandoned business to start her career in politics. For 20 years, unfazed by hardships, failures and allegations, she has been involved in all the major events of Ukraine’s politics. She was twice the deputy Prime Minister in Viktor Yushchenko’s government. In 2001 and 2011 she was arrested. As one of the few Ukrainian politicians she enjoys a fair number of core voters who perceive her as a charismatic leader. To her critics, she represents a symbol of populism. The next year most likely is going to be decisive for her political career.