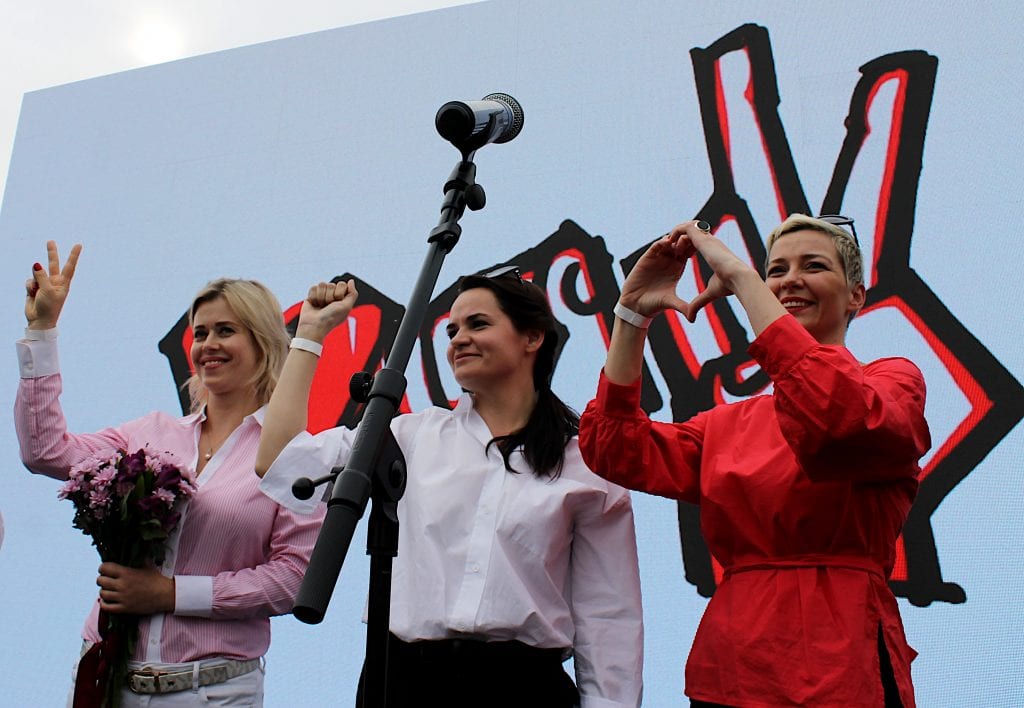 At least 7,500 people took to streets in the Belarusian capital of Minsk. It is an astonishing number, which perhaps surprised Tsikhanouskaya and the rest of her team. When she came on stage and saw the crowds, she broke into tears.

Tsikhanouskaya openly confirms her determination to run against President Aleksander Lukashenko. But she also admits that she is doing it to defend her jailed husband, well-known blogger Siarhei Tsikhanouski.

“The truth scared the authorities, so they reacted with repressions and intimidation. As a result, Siarhei was not registered as a candidate,” she told the crowds in Minsk. “But that’s how we were in our family, all for one, and one for all, so I decided to run for president instead of my husband.”

Last week, she and representatives of two opposition candidates who were denied registration as presidential candidates, former Belgazprombank head Viktar Babariko and prominent businessman Valery Tsepkalo, said that their campaigns had pool efforts to “defeat” the “long-time dictatorial regime.”

Tsepkalo’s wife Veranika and Babariko’s aide Maryia Kalesnikava appeared alongside Tsikhanouskaya at Sunday’s rally in Minsk. The crowd cheered them, too.

Lukashenko clearly underestimates the power of these three women. Firstly, they were able to immediately unite around Tsikhanouskaya. It brought more resources, organisation and members into the newly unified opposition’s team. Tsikhanouskaya herself says that she is “too weak” to run a campaign alone, but now feels support and encouragement from both Tsepkalo and Kalesnikava.

None of the three women is a politician. But their rhetoric is becoming stronger and more concrete. Tsikhanouskaya said her top campaign issue would be demanding the release of all political prisoners. If she wins, she promises to organise new, “fair and transparent elections with those candidates who were not allowed on the ballot.”

The united opposition campaigns are urging all voters to cast ballots for Tsikhanouskaya and to protect the election against possible fraud. They proposed to monitor the presidential poll and exclude early voting. Veranika Tsepkalo urged voters to mark themselves with white ribbons on election day. A hackathon was organised to create tools on how to count votes independently. It was joined by Belarusians living abroad, said Maryia Kalesnikava.

The three of them asked people not to be afraid to “defend their votes.” But they are too cautious to call for protests; after all, it can end in criminal prosecution.

But it also unites moderate supporters around them. People came in families to the rally. Students and the elderly. Those who never took part in any political protest before and members of the old opposition. Doctors. Teachers. People were quick to adopt the new symbols of the united trio, but also traditional, opposition cheers, such as “Long Live Belarus!”. Some came with historic white-red-white flags, but I also noticed a red-and-green flag that is usually being used in official events.

The three women found themselves in this new role after Lukashenko’s main rivals were excluded from the race. But it also brings a new answer to the old question “Who, if not Lukashenko?” Massive crowds in both Minsk and the nearby city of Dzyarzhynsk show that there is a group of society that can easily take the lead: women.

Lukashenko suffers a blow to his reputation as a dominant leader. It is no secret that he does not consider them as powerful contenders. He recently alleged a woman cannot win the presidency. In his opinion, the country’s constitution “is hard even for a man to carry.”

“If this burden is placed on a woman, she will collapse, poor thing.” Lukashenko said.

It might explain why Tsikhanouskaya was registered as a presidential candidate: not to show that the incumbent is afraid of a housewife, who runs only because she loves her husband.

It was part of an election campaign, so the authorities sanctioned the gathering and the police did not intervene. The authorised venue, however, was on the city fringes. The internet was turned off during the entire rally. Many believe that the Belarusian authorities are behind the shutdown of mobile connections.