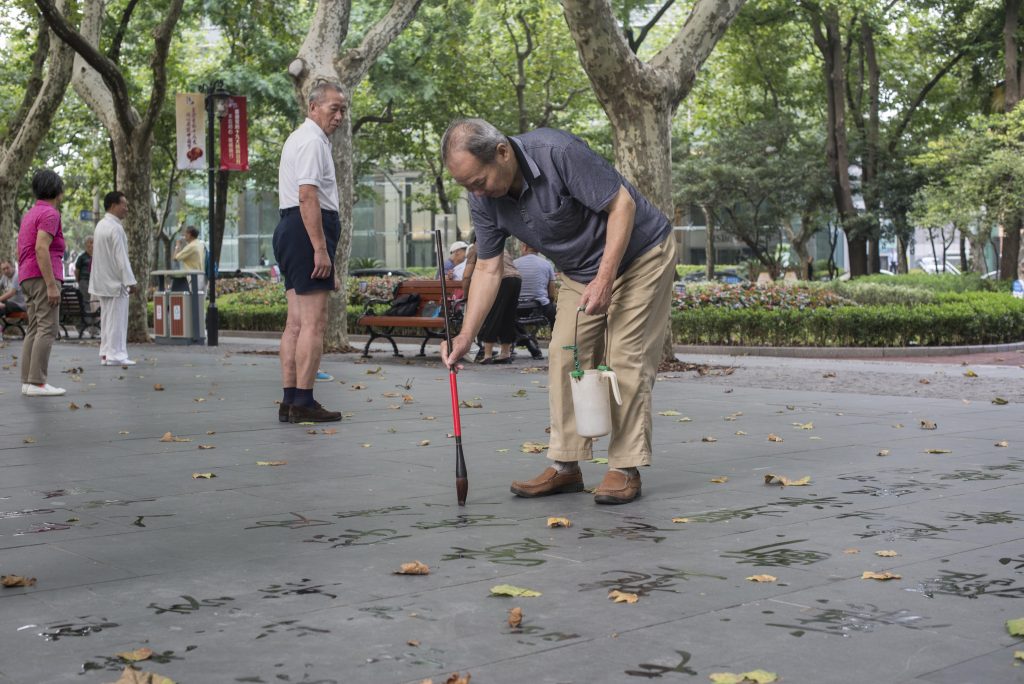 The scene reveals the two coexisting worlds in the current Chinese cities. In front of the luxurious IAPM Mall in Shanghai exhibiting ostentatious dresses of international brands and high-end computers and next to a busy zebra crossing, crowded with crouched heads and self-absorbed looks on the phones, there is a public park where a man draws harmonious calligraphy on the ground.

Every morning, the calligrapher appears in the park punctually armed as a soldier with a cut-off bottle full of water and a long brush. He writes with water as if it was ink. He strives for each line is near perfection. Sometimes, he writes proverbs (chengyu); sometimes poems. Classic literature. Projecting an image as beautiful as ephemeral that only lasts what the stroke takes to evaporate. When the verse ends, the first characters are already diffuse. He is not alone. In this park, there are several water calligraphers. In the whole China, there are thousands. They are anonymous artists of ephemeral art. It is an anomaly in the age of the selfie. Who are they and why do they do it?

Yao Xing has been retired for ten years. He explains, sitting on a bench, facing some characters that start to dissipate. “I had nothing to do, so I started coming to the park and writing, I write every day”, he says, and he laughs. Mr Xing laughs a lot. Like many Chinese citizens of his generation, he did not have an easy life. “I’m a worker, I worked hard in a factory making many sewing machines”, he says. Before it, “about 50 years ago, during the cultural revolution, I was sent down [to re-education] to Heilongjiang”, in a remote area in the mountains in the icy province, China’s northernmost point. Xing was one of the 17 million young city-dwellers who was sent to the countryside for forced labour and re-education during the movement ‘Down to the Countryside and Up to the Mountains’ in the Cultural Revolution (1966-1976) as part of Mao Zedong’s re-education policy. They were educated young people or with urban behaviours who were considered bourgeois. It happened a long time ago. Today Mr Xing is a retiree who writes poems with water and laughs.

What leads a person to draw with water although his name and work will remain unrecognised? The art of drawing water calligraphy on the ground is called “dishu”. “Di” alludes to the “Earth”. In China, the earth is represented by a square and the sky by a circle. “Shu” means “book” and therefore “writing”. It is a cultural movement to maintain and expand the calligraphy. It emerged in the 1990s in Taoranting Park in Beijing from some calligraphy enthusiasts, and soon it became a popular phenomenon. They started using bamboo poles and sponges but now they use specially designed brushes and even it exists the Beijing Taoran Dishu Association. Calligraphy enthusiasts and retirees? Yes, in China can happen.

In China, the calligraphy is considered something that more than the mere representation of the oral language, it is a millenary art. “Characters in animal bones or turtles shells back to over 6,000 years ago”, Mr Xing says, pedagogically. “I do it to maintain a healthy body” and “to get the art of calligraphy does not die”. “My daughter, when she was little, wrote calligraphy at school, but now with computers and mobile phones she has not more time to write.” It is a difficult struggle.

Today people look at their phones about every 6.5 minutes, according to a report of UK consultant Tomi Ahonen. This survey found that Brazilians spend the most time on their smartphones (5 hours a day), followed by Chinese (3 hours a day). In the United States, Italy, Spain, South Korea, Canada, or the United Kingdom people spend more than two hours a day on their mobile devices. China has 1.26 billion mobile users (83.2 per cent of the country population), according to Xinhua News Agency. 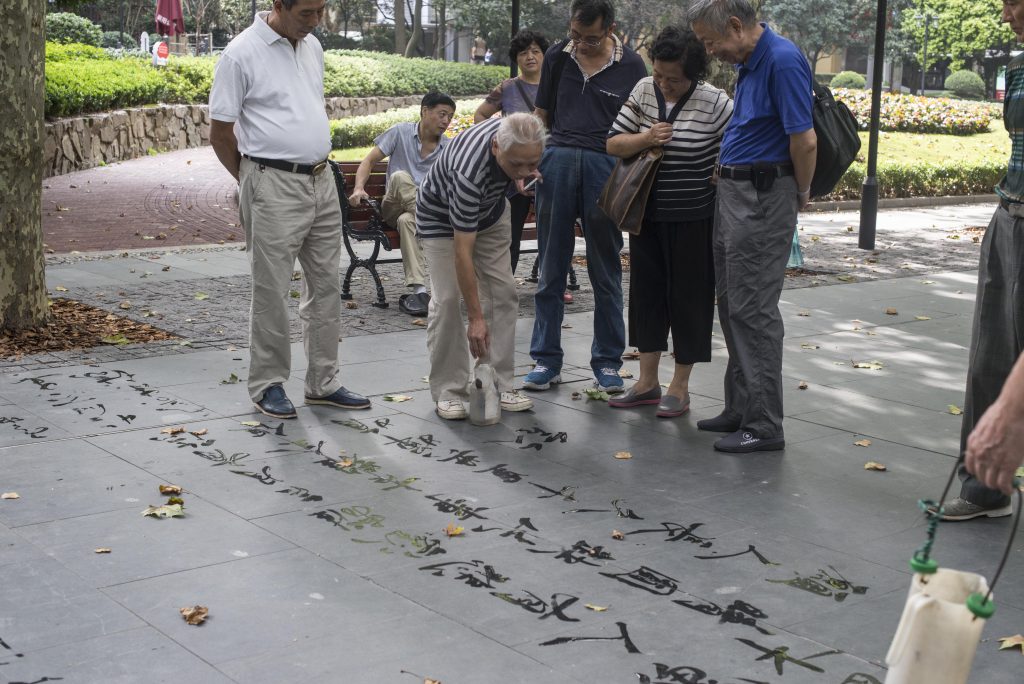 The park, an oasis of traditions

This park in Shanghai like others in China reminds an oasis of traditions stopped in time. Next to Mr. Xing and his long brush there are some improvised dancers with arms raised, playing music out loud, a couple of old ladies who practice Tai Chi with swords, a men who walks backward — you can see such a scene quite often and people say that such behaviour may prolong your life There are others who want to keep fit—, a woman who hits her back with the trunks of a tree and a rhythmic fan of choreography. Maky, 52, is one of the few women who write calligraphy in this park. She started to come two years ago when she got retired to dance with other ladies, and she met some calligraphers that taught her their technique. “Firstly I come to exercise my body because I must always bend down and get up all the time. Secondly, to train the eyesight and finally, to keep the mind active and not forget the characters, because we are always using the mobile phone and Internet and we no longer take a paper to write. So I push myself every day to come and do it”, she admits. 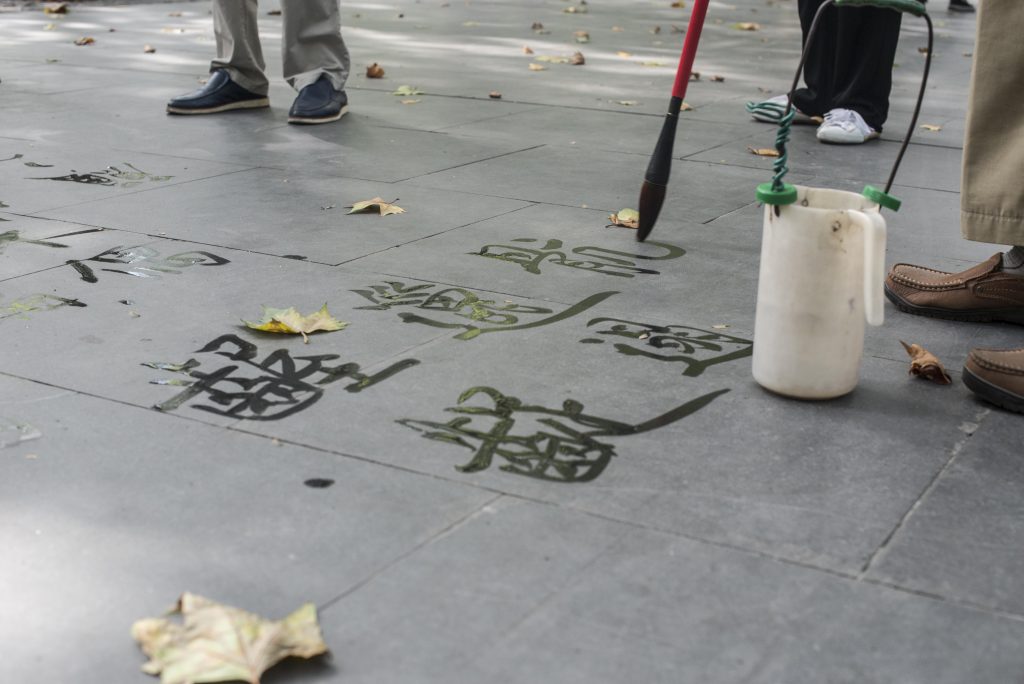 The writer’s spirit and the spirit of the times

“For centuries Chinese intellectuals have practised calligraphy as a means of attaining spiritual refinement and aesthetic satisfaction”, recalls Wang Yuchi at Unesco report ‘Cultures. Dialogue between the peoples of the world’. Mr Yuchi explains: “calligraphy expresses both the writer’s spirit (energy, temperament, aesthetic taste, personal inclinations, etc.) and the spirit of the times”. Because “no art-form exists in isolation.” “It is inevitably governed by the politics, economy, culture, customs and conventions of a given era or social stratum.”

“In China, calligraphy is appreciated as music. It is the first of all the arts in the Chinese cultural hierarchy”, François Chastanet convenes, a professor of Graphic Design of the Institut Supérieur des Arts de Toulouse / ISDAT and author of the survey ‘Dishu: Ground Calligraphy in China’. “Calligraphy is living art in China while it’s almost a dead art in the West. The keyboard civilisation is rising”, he laments.

Professor Chastanet has documented the interactions between urban territories and written signs in several countries: the pichação in Sao Paolo – a wall written with political statements that use typography similar to that of the Scandinavian runic alphabet; Cholo Writing of Latino Gang Graffiti in Los Angeles and “dishu” in China. 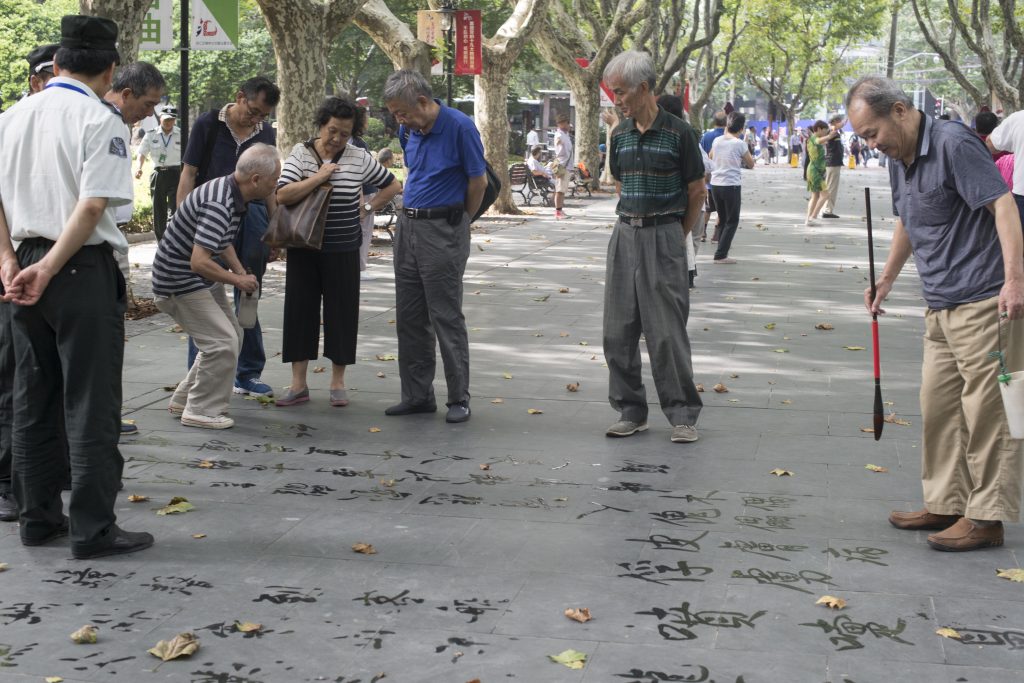 An ode to the perishable

Mr Chastanet says it is very difficult to compare the “tag” or graffiti with “dishu”, because the first ones are “illegal inscriptions having a close link with surveillance of public spaces” and “dishu practices are a socially accepted phenomenon because of its ephemeral nature […] that uses long texts, literature or poetry (not short names or pseudonyms).” “Nevertheless we can compare them in one point”, he says. “Western tags are empty meaning words where aesthetics is the main if not the only goal, and the freedom for the Chinese street calligrapher, even using long texts, is in the formal experimentation not in the content of the inscriptions”. “Chinese street calligraphers by security always use classic and officially accepted literature”, he explains. “Anonymity is the one and only access to freedom in China”, he adds.

Moreover, why using water something that does not endure? In some cultures, impermanence helps us to focus on the important things in life. “The most striking I found while doing my documentary was that nobody of the dishu practitioners where taking pictures of their productions”, Mr Chastanet assures. He says these anonymous calligraphers don’t need to record an image to exist. They often perform the same text, every day, it is a daily internal dialogue with themselves, they know at which level they are working, and a person can’t cheat on herself.” According to this professor, “dishu is a kind of sport in a way, both physical and intellectual, it’s all about the movement, quality of a gesture and the benefits you can have as an individual while mastering these gestures and signs”. It is an ode to the perishable.