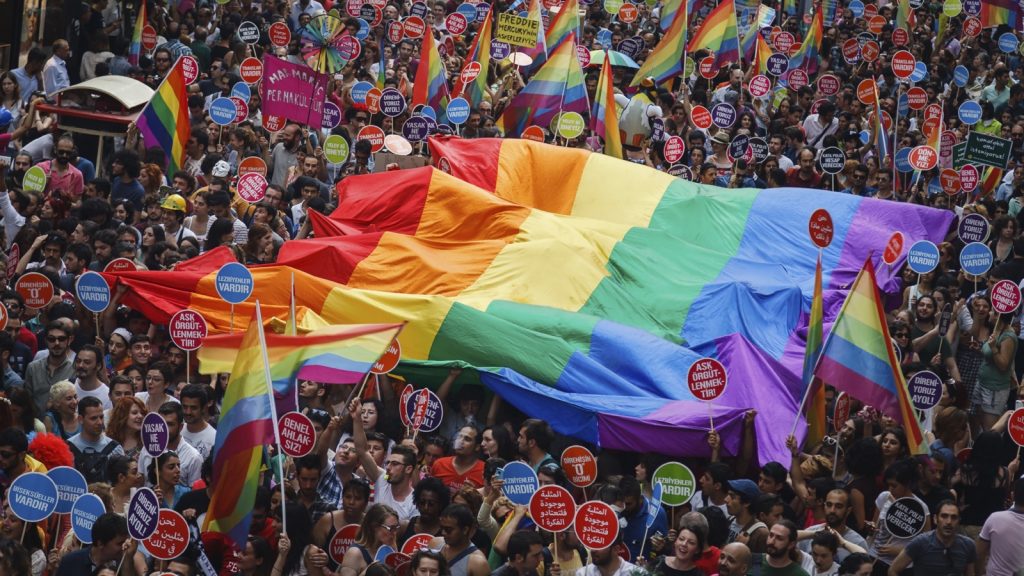 There is no room for LGBTI+ in Turkey’s upcoming elections

“Why do LGBTI+ people have to vote for a party that doesn’t even mention them? I am not going to vote in these elections. No votes for candidates who think LGBTI+ people are invisible!” LGBTI+ activist Yunus Emre Demir shared his views on his Facebook account. He is studying Sociology at Mimar Sinan Fine Arts University and has been a LGBTI+ activist since his high school years. He has been on the Istanbul Pride Week Committee for several years and organized many events and campaigns. But now, he is planning to boycott the upcoming elections. After Demir shared his decision, a few activists made the same point. In previous elections, the Social Policies, Gender Identity, and Sexual Orientation Studies Association (SPoD) organized campaigns to build bridges between LGBTI+ community and political parties. So, why have they failed to make an impact this time?

The date of the first round of elections, 24th of July is also the beginning of the Istanbul Pride Week. The LGBTI+ community is engaged in both. The last three pride parades were outlawed by the Governorship of Istanbul and police forces intervened. So LGBTI+ activists are struggling with legal concerns amid the atmosphere of heated election debates.

On one hand, Turkey has a powerful LGBTI+ movement. Homosexuality is not illegal in Turkey and Pride Parades after 2010 were the best attended in the region. But on the other, Turkey has the highest rate of murder of trans people in Europe. The last three years have witnessed systematic pressure on LGBTI+ associations. In addition to Istanbul, the Governership of Ankara, capital city of Turkey, banned all LGBTI+ related events. Beyoğlu Municipality, in the heart of Istanbul where LGBTI+ events are commonly organized, promulgated the same ban.

The 2013 protests over Gezi Park ware a turning point for the LGBTI+ movement in its efforts to gain legitimacy and visibility. Just before the demonstrations began, the Republican People’s Party (CHP) and Peace and Democracy Party (later turned into the Peoples’ Democratic Party – HDP) deputies introduced a parliamentary question on the problems of community. This was a historical milestone that empowered the LGBTI+ in its activism. Support for LGBTI+ rights, or at the very least being anti-homophobic, became part of opposition consciousness and consensus. While perhaps not the strongest, many bonds were established between CHP and HDP and the community. But in the upcoming election, the new consensus is one of silence on LGBTI+ issues.

The CHP presidential candidate, Muharrem İnce, stands the best chance of challenging the incumbent, Tayyip Erdoğan. His rallies are packed, enthusiastic and hopeful. He promises to build factories, create jobs, focus on youth and women. İnce also has a sense of humour, knows how to talk to people and has a freshness which Erdoğan lacks after 15 years in power. In the city of Diyarbakır where most of the population is Kurdish, he didn’t mince his words. “Let’s name it. Kurds want to be honored and Turks have concerns. We will ease the Turks’ worries and honor the Kurds. No lies, no secret meetings. The place of the solution is the Turkish Grand National Assembly,” İnce said. Very well then, can we also ask about what will happen to “pride” of LGBTI+ people?

İnce reaches out young audience through social media accounts. I have asked questions concerning LGBTI+ issues, pride ban and the hate crimes. But, there was no answer. İnce set out a “Manifesto for the Future” with policy declarations on democracy, the economy, international relations, education, health, culture, sports and women. There is no hint of the problems of LGBTI+ people in what is a very elaborated literature.

Selahattin Demirtaş, the presidential candidate from Kurdish originated Peoples’ Democratic Party (HDP) also retains his good humour, despite having to fight the campaign from a prison cell. Last Friday, his crew organized a Q&A on Twitter with the #Demirtaşasoruyorum (#AskDemirtaş) hashtag. He gave transparent and positive answers concerning the Kurdish issue, democratization of Turkey, culture and media. Kaos GL correspondent Yıldız Tar and I asked if he has any agenda for LGBTI+ rights. But, there was no answer. It is hard to criticize a jailed candidate who is threatened with death penalty. On the other hand, some of the HDP parliaments have collaborated with LGBTI+ community for years. And HDP has a LGBTI+ activist candidate in this election. A well-known LGBTİ+ rights activist, Hasan Atik, is running for a seat in the Turkish parliament as the 4th candidate on the ballot list in the northwestern city of Edirne. But, this silence on the actual presidential campaign sticks out.

Temel Karamollaoğlu and Merak Akşener are both candidates from right-wing parties with a conservative and, especially for the former, a pious base. No one expects them to have much to say about an LGBTI+ agenda. Because state-controlled media allows them little exposure, much of their campaigning is done through social media. Like other candidates, they are trying to set out a vision of a future Turkey. They focus on issues like women, science, education and youth – where AKP is weak. But, there is not a single word about LGBTI+.

Shortcomings of the LGBTI+ movement

Politicians are not the sole ones to blame. We also have to recognize the shortcomings of LGBTI+ associations, themselves. Admittedly, they are on an uphill struggle. Turkey is under emergency rule and the latest prohibitions on LGBTI+ events come on top of the threat associations face to be shut down altogether. By chance, Istanbul Pride Week is sandwiched between the polling date and a possible second round of elections on 8th July. “We were surprised by the early elections, like everyone else. There was not enough time to build a strong campaign. Our predictions and plans were dated to 2018 October or 2019 March,” says the Board Member of SPoD Tuğkan Gündoğdu. He admits that his group was doing its best just to stand still “We are trying to strengthen the community, build a secure environment and make it sustainable,” he said.

It is not just political parties dodging the issue. Social groups, cultural associations along with opposition figures are not standing side by side with LGBTI+ community in the current climate of prohibition. One of the leading film festival that has a “Rainbow” section, the !f Istanbul Independent Film Festival, changed the name of its queer party rave to the more anodyne “Love Rules.” The feminist film festival Flying Broom was criticized for not programming queer movies. To top it all, many LGBTI+ people themselves do not want to criticize opposition candidates or even open LGBTI+ issues for discussion. “We have to get rid of Erdoğan first,” many people think.

Istanbul Pride Week Committee is organizing a series of events, including film screenings, panels and gatherings for the Pride Week with a small volunteer group. I wonder, which politicians are preparing a statement in the event the police tries to stop it? Or, let us be hopeful, if Pride Parade is held in a peaceful way – which politicians will join in? Opposition candidates are promising all sorts of things for the future of the country. LGBTI+ people are right to ask themselves if they have a part to playing that future.

Many in Turkey think that this is a critical election, and Yunus Emre Demir is one of them. “If only candidates were saying meaningful things about LGBTI+ issues. A boycott is my way of keeping the struggle going,” he said. And SPoD’s Tuğkan Gündoğdu is not giving up on politics. “We are preparing an extensive campaign for the upcoming municipal elections,” he said, setting March 2019 as a target date.