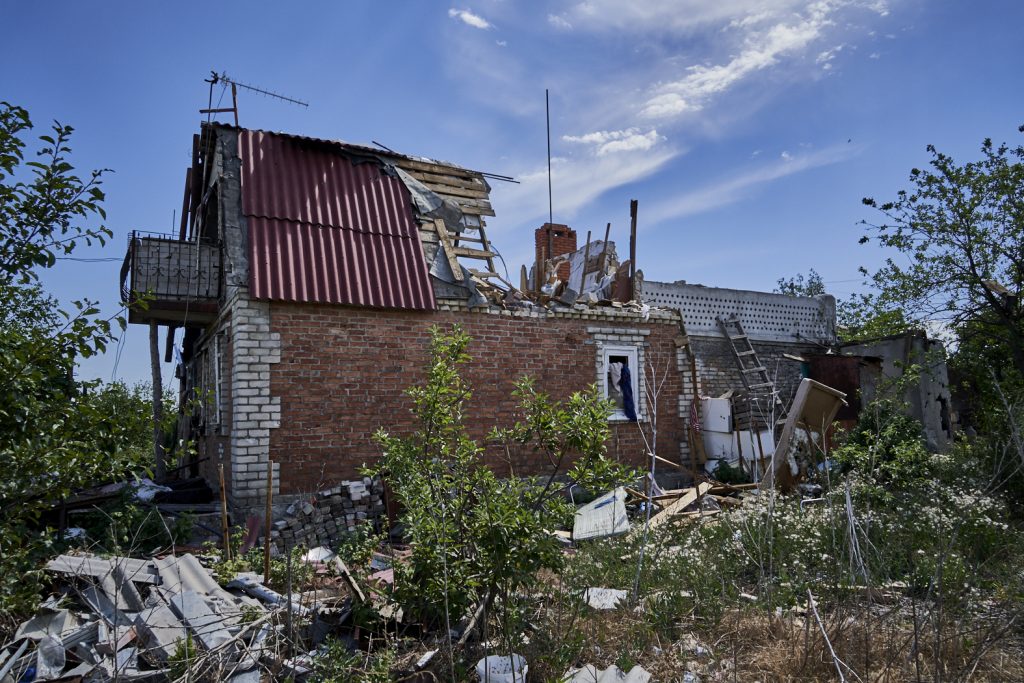 The so-called ‘bread ceasefire’ has been ongoing in Donbass since July 1st. According to the Organisation for Security and Cooperation in Europe (OSCE), the situation on the dividing line has improved considerably. However, this does not mean that no shots are fired.

On July 12th Alexander Hug, Deputy Head of the OSCE Special Monitoring Mission announced that during the first week of the so-called ‘bread ceasefire’ the number of shellings dropped significantly (by 85%) and that no one had died in the area close to the front.

However, the OSCE mission counted 1200 breaches of the ceasefire during the first week. According to Alexander Hug, it is particularly worrying especially in areas where the positions of the two sides are not far away from each other.

Maritime infantry on the positions

One of such places is Vodiane, a small village several kilometers east of Mariupol. It is one of those places on the front line which is mentioned practically every day in the reports of the Operations Headquarters of the United Nations Force. In Vodiane every day there is a fire exchange. The opponent’s positions are only 450-500 m away from the Ukrainian ones – which is below the range of a machine gun.

On the Ukrainian side, the defence is maintained by maritime infantry units which considered to be the elite of the Ukrainian army. Vadim Sukharevski is the commander of the battalion. This 33-year-old captain is a living legend: on April 13th, 2014, he was the first Ukrainian soldier to open fire in Donbass. It saved a special SBU group which near Słowiańsk fell into an ambush of the Russian fighters under the command of Igor Strelkov. On the other side there is also a maritime infantry of the so-called Donetsk People’s Republic, also considered to be elite.

Until the war, Vodiane was a holiday village, although due to the proximity of Mariupol many people lived there all year round. Now, the silence of the day hardly puts people’s mind at ease. One can never know when the shooting will start and the village itself is so close to the front line that even the shells from automatic weapons fly between homes.

“I’ve been at war for two and a half years now. It was also a long time ago that we arrived at these positions for the first time in the autumn of 2016. We know them well, we did them ourselves”, says the company’s commander, 23-year-old Pavlo. He was taken to maritime infantry after graduating from the Lviv Academy of Civil Forces and graduated in February 2016, after which he was assigned to the maritime infantry.

“Ever since I was a child, I have dreamt of becoming a soldier. I attended a military high school. The war, which started in 2014, only strengthened the decision to serve and defend the homeland”, explains the young commander.

According to him, there is only one difference between the current ceasefire and the previous situation: no heavy artillery is used. However, the enemy is still shooting mortars and small arms. Anti-tank missiles and automatic grenades are also still in use.

“Nobody here has heard of any ceasefire”, he adds.

On June 20th, the positions of the maritime infantry in Vodiane were under heavy artillery fire. A few days before that, it was reported that another Russian humanitarian convoy had arrived in the so-called Donetsk People’s Republic. According to the Ukrainian side, the ammunition is supplied this way.

“Literally two days later, a powerful artillery fire of our positions began. It lasted almost eight hours. We were shot at with 82 and 120 mm mortars, with 122 mm and 152 mm artillery, as well as from tanks. All at once. There had not been such a strong fire for a long time”, says Pavlo.

The commander is convinced that Russian officers are fighting on the other side of the front line as the Russian technology and ammunition is used by the opponent.

“We have enough evidence: fragments of bullets fired from grenade launchers of Russian production. They are using Russian anti personnel mines against us. Their markings and year of manufacture indicate that they were created after 1991”, he stresses. 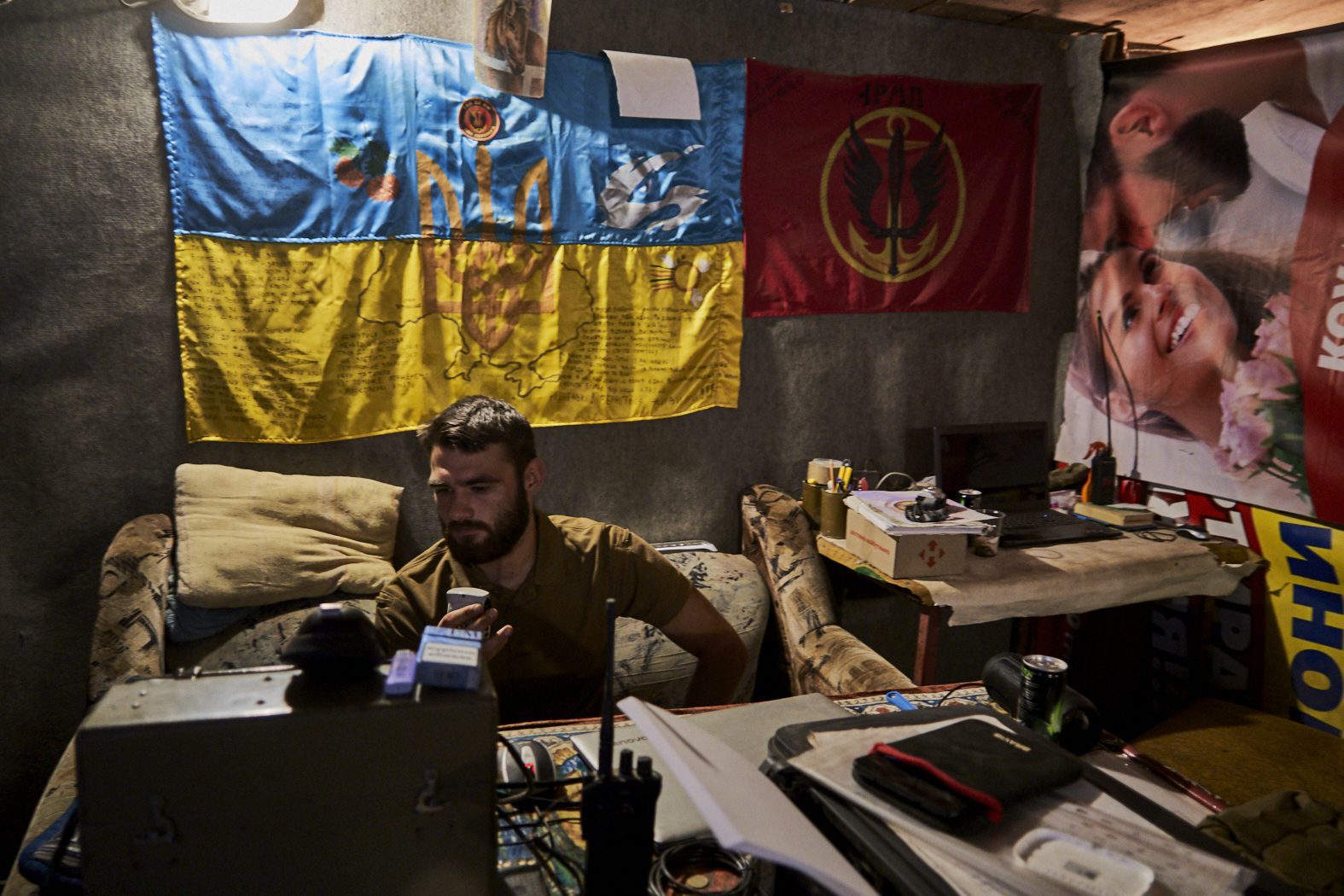 In the picture: Commander Pavlo. Photo by Marcin Suder

In the village itself most of the buildings were damaged by fire, some of them completely destroyed. In one of the surviving garages one can see soldiers. They are bench pressing.

Zoja lives on the outskirts of the village. She is 62 and lives alone. Her husband died in 2017, her son – this year. They did not die because of shellings but of diseases. Zoja keeps chickens, ducks, pigs. Out of 11 goats, only 3 survived. The rest was killed in the shellings.

“When the bullets are coming, I hide in the basement. This is how we live, quietly. We do not wince, though. We want the war to end sooner”, says Zoja.

The inhabitants are helped by the Red Cross, the Rinat Achmetov Foundation and above all, the soldiers. “I share with them and they share with me”, Zoja laughs.

In the centre of the village, next to one of the few untouched houses, there is a Volga car – old one, but still seems like it could be driven. It serves as a home to a 43-year-old Serhiy.

“Recently it has been a bit quieter. Together with our neighbor we keep our goats. They have become accustomed to the sounds of the shots, anyway”, he says.

There are only 10 people left in the village. Serhiy claims that in 2015 some datcha owners came to see their houses, some picked fruit. They stopped coming when it got too noisy.

“Anyway, later on the soldiers stopped allowing the people to enter the village, because the risk was too big. And we live here all the time, we do not leave, because we have no place to go. We are holding on and we hope that it will finally come to an end. Iif they don’t make too much noise, the mood is good but if they do, the body and heart start to react. There were times when bullets were swarming over our heads as well. You’re walking and you unexpectedly hear a bullet fly past you. Your heart stops. Now it is more or less normal”, adds Serhiy with a smile. 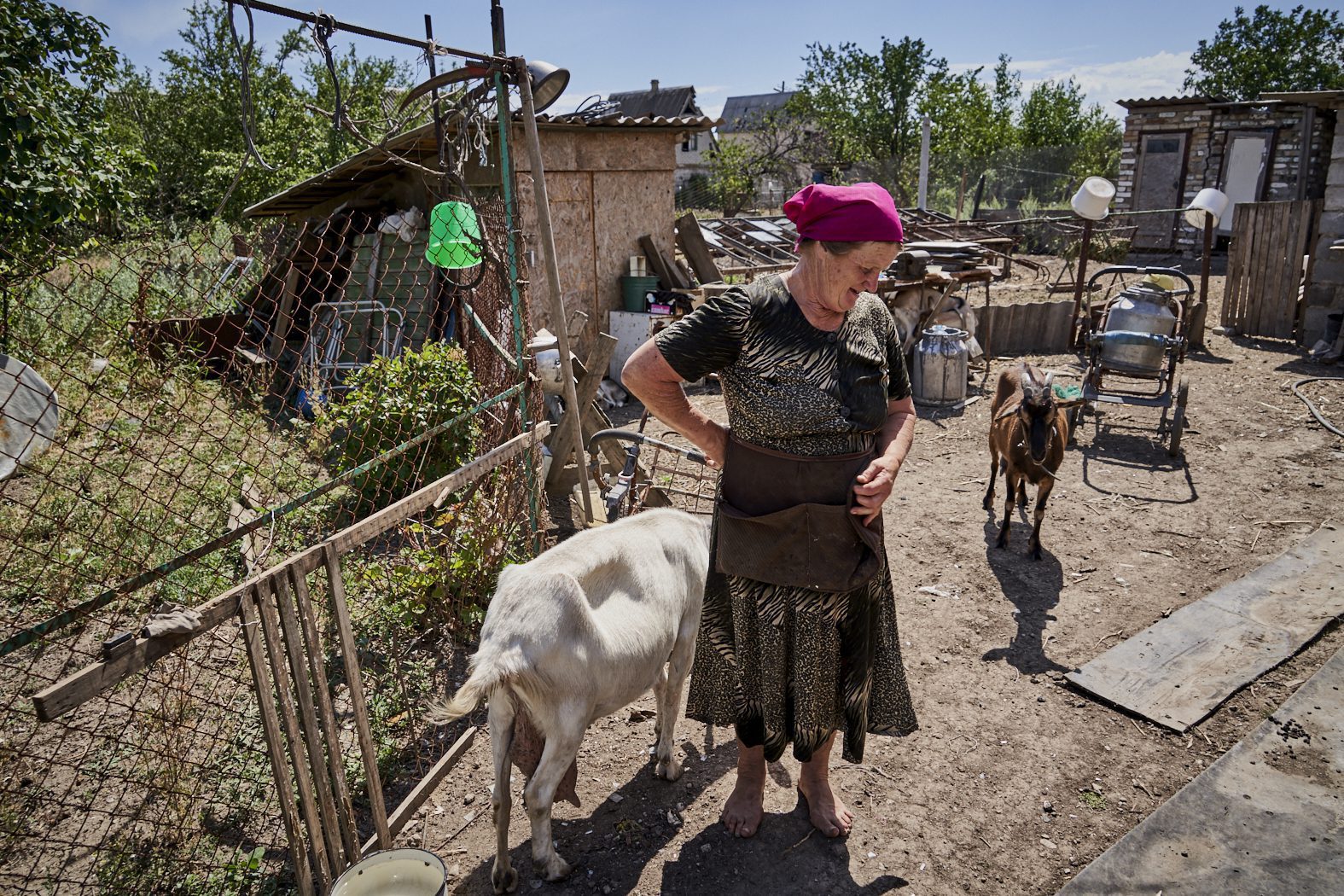 In the picture: Zoja. Photo by Marcin Suder

The positions behind the village can be reached on foot or by car by the so-called ‘road of life’, which is sometimes shot at. After that one has to walk a few dozen meters among the trees. The positions are named after Ukrainian towns or regions, e.g. Crimea, Uman.

After a ceasefire was put in place, it is usually calm during the day. The fire change usually starts after it gets dark, although there is no rule. The trenches are human-sized and offer good protection against missiles. Anyway, the soldiers are constantly deepening them and making new ones – it is a real maze. Between the trenches there is even a “relaxation area”, which includes a sofa, an armchair and a mini-gym.

The twilight falls and crickets are now easy to hear. Everything takes place like in a clockwork. When it gets dark, the first shots suddenly take place – first the single ones, then, after a while, the series. From time to time you can hear the characteristic swish of bullets flying over the trenches. Infantry soldiers work calmly and systematically on their positions: they look for places from where the enemy shoots at them and respond with fire. During the breaks they load magazines and the ammunition belts for their machine guns.

Nick is on duty at an advanced position. After a few minutes, Vova comes with the grenade launcher RPG-7 which they use to force the enemy to remain silent at least for a while.

Vova aims for a couple of seconds. Then there is rumble, flash, a cloud of sand rises, covering everything around with dust. After a while an explosion can be heard.

“Vova, it lit up a bit”, says Nick and shoots several times.

Nick is 27 years-old. He has only been in the unit for a month and says that he is still learning the habits of the military. He comes from Dnieper, where he recently worked as a manager in one of the companies. He wanted to go to maritime infantry, because it was an elite of the army.

“Maritime infantry service has lived up to my expectations. It is even better” he says.

He is very composed and answers the questions calmly, while observing the foreground.

“They are shooting from the RPG, too, even during the day. Yesterday they were shooting at us from an automatic grenade launcher. I know the trees, know where their positions are, but you can’t see them anyway”, he says. 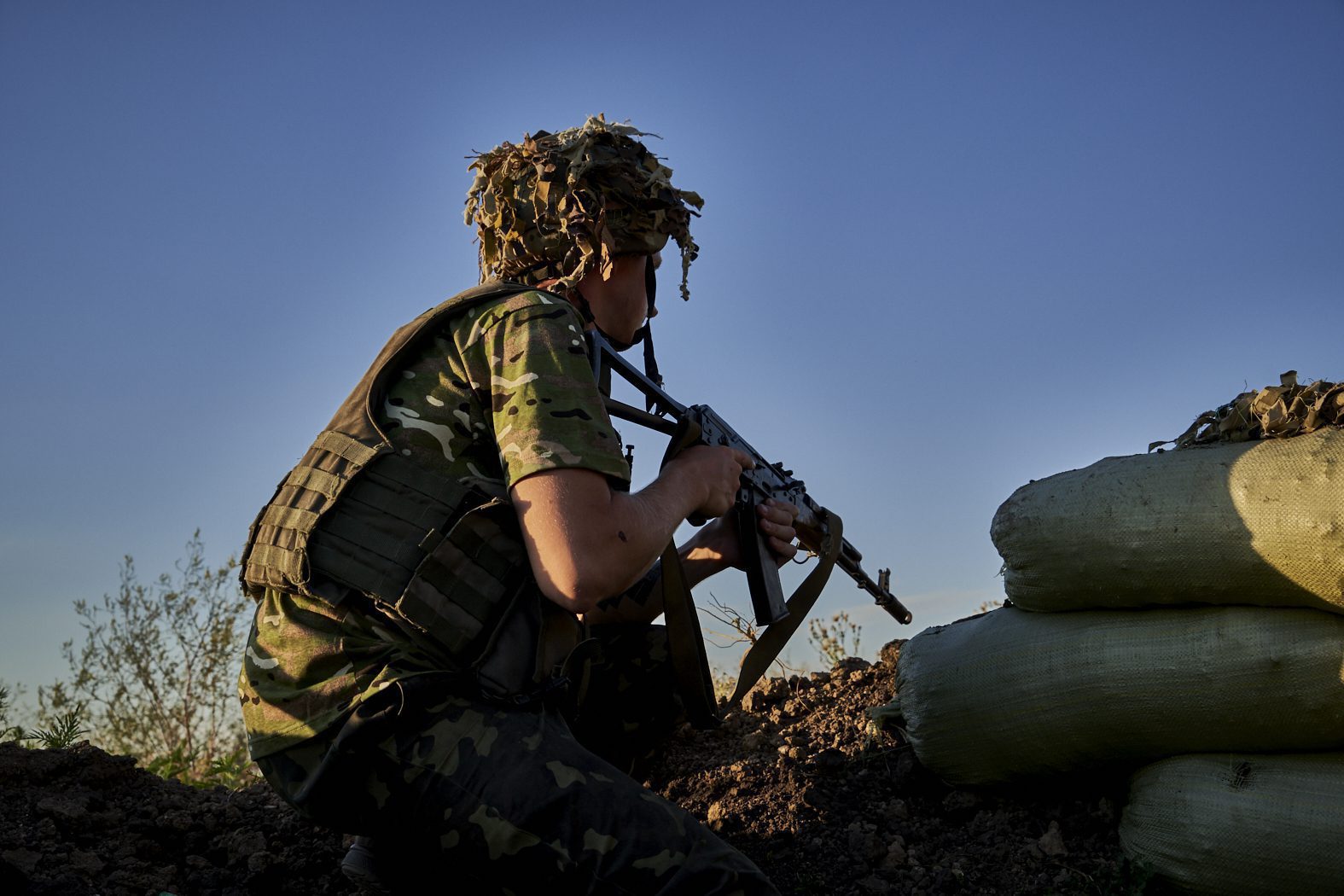 In the picture: Nick, photo by Marcin Suder

The conversation is interrupted by shots from the opponent. Nick answers and with his Kalashnikov. The fire exchange takes a few seconds, after which Nick calmly continues his speech as if nothing happened. From time to time, a red light bullet flies above the starry sky.

“Zero!”, answers Nick through his shortwave radio. The same answers come from other positions. The officer on duty checks the situation on the defended section. ‘Zero’ in the military slang is a short code used to describe that the situation is calm.