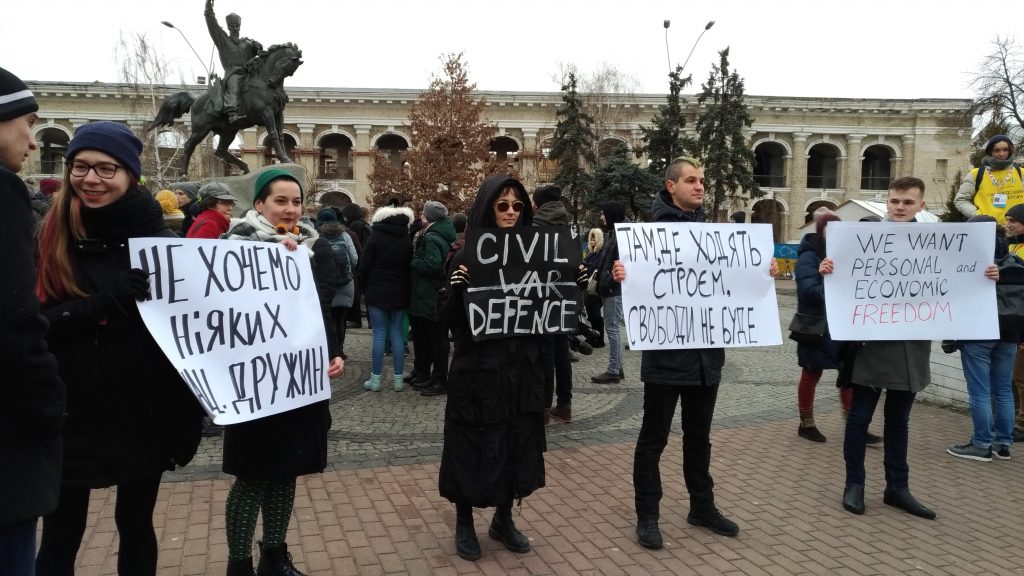 In the centre of Kiev, at the end of January, 600 people in black and grey uniforms swore upon “the loyalty to the Ukrainian nation”. However, they were neither soldiers nor policemen, but members of the paramilitary organization called the National Teams. They claimed they wanted to introduce “Ukrainian order” on the streets of the country. That event has started a broad discussion about the state’s monopoly on the use of force. Despite the wave of indignation in social media, only a few dozen people took part in the protest the National Teams on February 4.

The date of the oath was chosen on purpose. On January 29th, the 100th anniversary of the Battle of Kruty passed. 400 Ukrainian students and Cossacks faced 4000 Bolshevik soldiers.

The oath was taken by the former commander of the volunteer regiment “Azov” and the leader of the National Corps party Andriy Biletsky. National Teams are part of the so-called “Azov” movement. Veterans of the war in Donbas serve in the National Teams. They had previously fought in “Azov” battalion, and then in “Azov” regiment.

National Teams have existed for a year, but their activity has not caught public attention before and the media has not been particularly interested in them. Young people wearing uniforms with large National Team patches on their backs could be seen during the October protests under the buildings of Verkhovna Rada. However, they took off the identification marks while being recorded by cameras.

According to the commander and veteran Ihor Mykhailhenko alias Tsherkas, the core of the organization is formed by the former fighters from the east of Ukraine and some “patriotic youth”.

The National Teams’ priorities include: the defence of Ukraine, patrolling the streets, fighting against drug and alcohol trafficking, protecting small business and the promotion of a healthy lifestyle.

During the press conference Mykhailhenko informed that Teams’ members in Kiev, Dnipro and Ivano-Frankivsk have recently stopped a couple thieves and drug dealers. They were handed over to the local police.

Who needs the National Teams and what is their real purpose?

The Team’s oath provoked controversy in media and social media. You could have heard comparisons of organization’s representatives to the “nazi assault troops” or the so-called “Titushky”.

The main question in the discussion was: could the National Teams be used for political purpose in the future, for example during a coup d’état. There are also other concerns related to the taking care of public order by a nationalist organization.

– In Ukraine the monopoly on the use of force belongs to the National Guard, the police and the Armed Forces of Ukraine. All paramilitary groups that try to set themselves up in a similar role on city streets are illegal. Social groups can become whatever they like, provided they do not go beyond the legal framework – said Arsen Avakov, the Minister for Interior Affairs.

The minister is a long-time friend of Andriy Biletsky and that is one of the reasons why he had to answer some questions about the legal status of organizations like the National Teams.

In 2014, Avakov supported the foundation of the “Azov” battalion, which has grown to the size of the regiment. Nowadays “Azov” is a part of the National Guard, subordinated to the Ministry for Internal Affairs.

Some questions have arisen in the Ukrainian media, whether the development of structures under Biletsky’s leadership and the structures based on “Azov” battalion is not an alternative force and political base for Avakov.

Obviously, objections of this type are rejected by both Avakov and Biletsky. The leader of the National Teams and some other movement representatives claim that the structures of the Ministry for Internal Affairs and the minister himself cannot be an authority to them so there can be no question of any cooperation.

An organization for rent?

One of the frequently asked questions concerns the way of financing of the National Teams’ activities and other “Azov” organizations. Officially, members pay fees or buy uniforms themselves. Small business representatives also help them. However, there is no specific information on which companies are involved in this practice.

When 600 young people took an oath in Kiev, assuring that they were ready to bring new “Ukrainian order”, a peculiar event took place in Cherkasy. During the meeting of the city council, some masked men in black uniforms appeared and stood in front of the deputies’ tables. They did not want to leave the room, there were some quarrels. It turned out that they were the representatives of the National Teams, who forced the councillors to adopt the budget for 2018.

– In my opinion everything went correctly, the councillors could not cope with their duties, and these people decided to restore an elementary order – commented in Television 112 the leader of the National Corps Andriy Biletsky. Then he added. – Has any of the deputies been hit? Maybe some of them would deserve … But no, no one has been hit. Any policeman was hit? No, no one has been hurt, no one has been insulted. Therefore, we have an extremely positive result.

However, the newspaper “Ukrainian Truth” has learned from the police sources that it was the mayor of Cherkasy Anatoly Bondarenko who invited “the members of the National Teams to the city council meeting”. That was the way to show “who was the host of the city”.

According to the human rights defenders the events in Cherkasy were scandalous. For the critics of Biletsky’s activity it was a proof that the accusations of suspicious contacts between the National Corps leader and the business representatives to combat competition illegally are correct.

“Your order sucks”, “against Nazism and militarism”, “we do not want any teams” – such slogans could be read on hand-made posters, kept by young people who gathered on February 4 in one of Kiev’s district called Padol. They met to protest the National Teams.

– We do not want any repetition of the situation that took place in Donbas in 2014, when “local civilians” blocked our army units and cooperated with the separatists – explained the young representative of the National Team, Danylo Yakovlev, who came to talk to the protesters.

However, they were not convinced. The participants emphasized that there is no place for non-state paramilitary structures wishing to restore their order in the state of law. Activists are concerned that private organizations are to decide about various aspects of life, for example about alcohol consumption. They can operate firearm as well. Officially the representatives of the National Teams ensure that their members will not use it in an illegal manner. However, the videos promoting the National Teams show how their members practice shooting. Danylo Yakovlev explained that this is a preparation to defend against a possible aggression, like the one in 2014.

For some commentators, the emergence of the National Teams proves that the ideas of strong authoritarian powers are gaining popularity in Ukraine. It is also worrying that only a few dozen people came to protest the National Teams.