What purpose do museums serve? Are they merely venues in which to display art and/or artefacts, or do they function as tools for keeping the humankind’s collective memory alive?

All these questions arise out of the recent transfer of Istanbul Modern from its street-cred-worthy premises in a fashionable warehouse, to the grand nineteenth century Union Française building in another part of town. The reason it had to move was to keep one step ahead of the property developers.

The move makes us wonder who gets to decide what is, and what is not, part of our vast collective memory? Do modern sculptures or monuments, including those that were torn down just because some politician billed them as a “monstrosity,” count, or not?

Do urban cities with “a spotless mind,” endlessly demolished and rebuilt to secure constant cash flow as a tool to desperately keep the economy booming, still count as part of our collective memory?

When the city is considered a part of the collective memory of all its inhabitants, rich or poor, whose lives are interconnected on a daily basis with that city’s neighborhoods, roads, pavements, trees, stray animals, buildings — which include schools, hospitals, apartment blocks, banks, and yes, of course, museums — the connection becomes clear: museums, in addition to housing pieces of collective belonging to all humanity, are buildings which are part of the collective memory of a specific society and a specific moment.

So when a museum of modern art is relocated — although “temporarily” for renovation purposes — this still breaks the connection it has with the public on at least two levels: first, the one people have with the museum, as potential or true museumgoers, and second, the connection people form “with the city through the museum” as an urban landmark, however recent that landmark may be.

Through a quick online search, one could figure out that humankind, perhaps out of the need to display — and brag about — its wealth, has invented the concept of the museum many centuries ago. According to the European Museums Network website, the oldest known museum in history was built during the 6th century BC in Babylon. Fast forward two millennia, and the Musei Capitolini in the Italian capital of Rome, launched in the 15th century and the oldest known public collection of art in the world, still attracts visitors as a museum.

Too bad, in Turkey, a major art museum can only survive 14 years in the same spot. It then has to relocate. In this country, and particularly in Istanbul, no street, no square, no quarter can remain the same as it used to be, say, 50 years ago. This is not because they have outlived their usefulness but because there is a pressing need in this country to pour concrete anywhere and everywhere. What chance does a warehouse, transformed into a museum only 14 years ago, stand at resisting the trend?

This is a country where the list of most visited museums is usually topped by either the Topkapı Palace in Istanbul, the Mevlana Museum in Konya, or the Hagia Sophia, the latter of which is not even a museum in the true sense of the word. That a modern art museum has moved to another location, or whether it ceases to exist at all, perhaps is of no significance for the general public, whose memory is subject to constant activities of erasing and rewriting through the incessant and purposeful reshaping of their habitat.

The Istanbul Modern reopened on May 23 in a grand building but this is only a temporary location. The opening exhibition was called, appropriately enough, “Human Nature,” featuring the works of Turner Prize-winning British sculptor Tony Cragg. Eventually the museum will move back to where it came, only the district will have been transformed by Istanbul’s controversial dockland development project, Galataport.

The museum’s relocation and Cragg’s exhibition made headlines on the arts pages of Turkish newspapers, but very few (only two) journalists cared to — or perhaps dared — question the suitability of the temporary museum building to host a selection of grandiose sculptures. 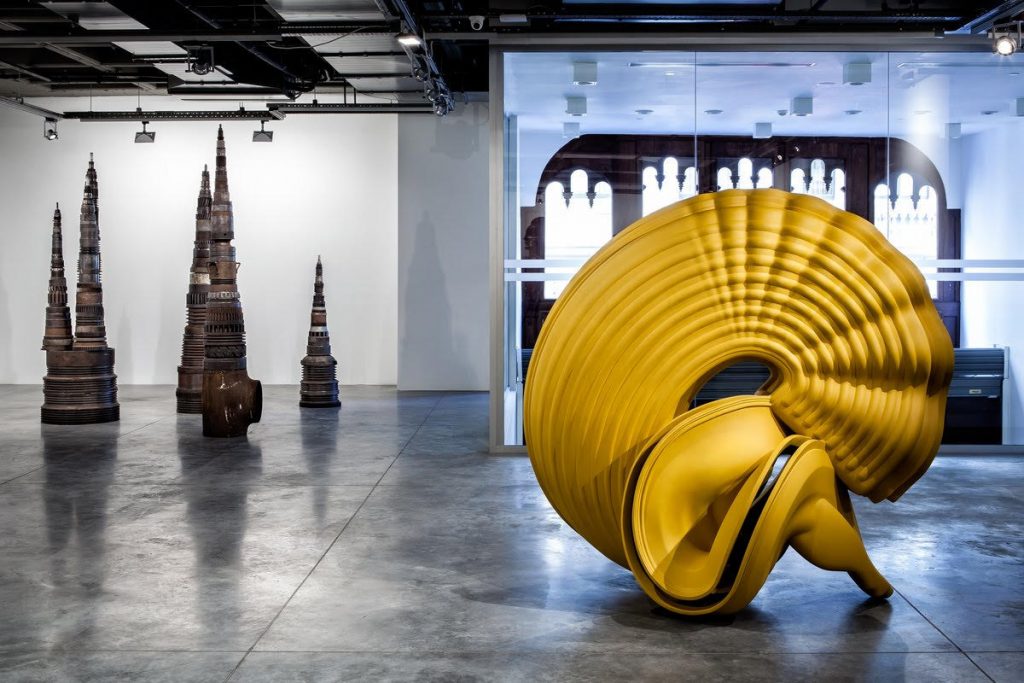 A selection of works by British sculptor Tony Cragg is on display at the exhibition “Human Nature” in Istanbul Modern’s temporary building.

Having opened in late 2004 as Turkey’s first privately owned art museum dedicated exclusively to works of modern and contemporary art, the Istanbul Modern quickly turned into a landmark of the city with not only its sprawling exhibition floors and permanent collection but also its unique location on the Karaköy waterfront overlooking the southern entrance of the busy Bosporus strait with the rather tranquil — and greener — Asian side across the strait forming the backdrop to the inspiring view from the museum’s yard and café.

The museum curators may hope to return to their original neighborhood in three years’ time. However, questions still abound considering the drastic transformation Istanbul, and most notably its “signature silhouette,” has undergone in the hands of municipalities under the ruling AKP (Justice and Development Party) administration ever since 1994, when the country’s current president took his first major step on the political ladder as mayor of Istanbul.

Even after moving to Ankara as prime minister and later president, Recep Tayyip Erdoğan never gave his old job of being the Istanbul mayor, often personally deciding, even at the expense of triggering an unprecedented nationwide wave of Gezi Park protests in June 2013, on matters related to Istanbul. Next was the demolition of the Atatürk Cultural Center (AKM), the renovation of the Taksim Square, the construction of Istanbul’s third airport, the third bridge on the Bosporus, and of course Galataport (which had been stopped by a decision of the Council of State) were all personally ordered by Erdoğan.

Needless to say, the construction sector has been the engine of growth under the AKP’s tenure in power.

The Istanbul Modern’s new premises are being designed by the architecture office of the Pritzker Prize-winning Italian architect Renzo Piano, whose past work includes the Centre Georges Pompidou in Paris, and the Whitney Museum of American Art in New York, although the final project has yet to be made public.

The much-debated Galataport, covering a stretch of 1,200-meters on the waterfront between the Karaköy and Fındıklı neighborhoods, will eventually turn Karaköy, Salıpazarı and Fındıklı into fancy neighbourhoods, inaccessible to all but the well- healed.

The recent demolition of the AKM, the transformation of Taksim Square and the entire checkered history of urban space in Istanbul means that art buffs hoping to move to a modern Istanbul Modern near its old location would be foolish to hold their breaths. Indeed, who knows if anyone will even remember the old building at all, so spotless is the Istanbul mind.

Main Photo: An aerial view of Istanbul’s central Karaköy quarter, which also housed the Istanbul Modern. The buildings on the waterfront are being demolished for the Galataport project. Photo Credit : DHA

It was meant to be a show of might, a showcase of Turkey’s economic status under the rule of the Justice and Development Party (AKP). The size and capacity of Istanbul’s new airport were designed to make Heathrow look small, Charles de Gaulle blush with embarrassment and O’Hare turn green with envy. From groundbreaking ceremony […]
Özgün Özçer