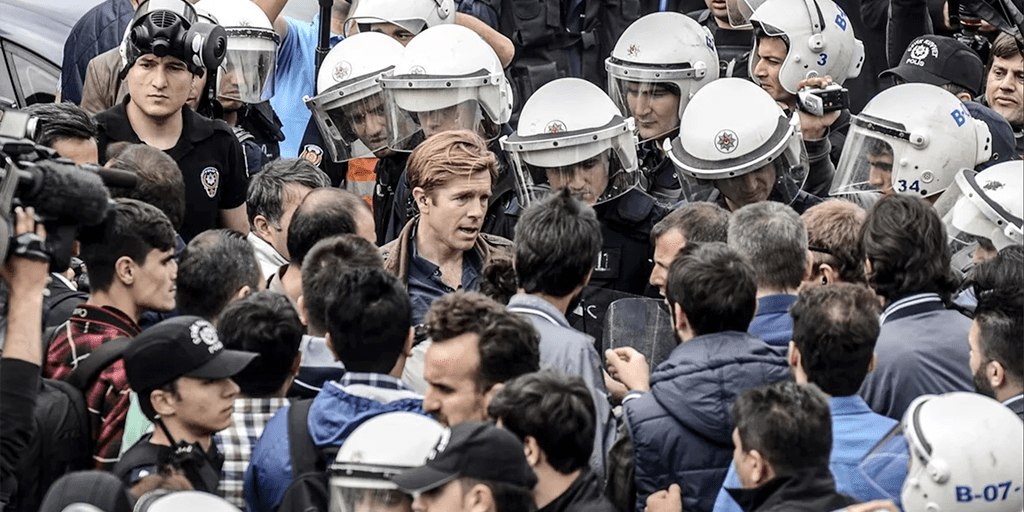 Foreign journalists in Turkey play a dangerous balancing act. Though not subjected to the same threats as their Turkish counterparts, they still walk a tightrope. Sometimes they fall off.

On 7 September, Turkish authorities detained Austrian journalist Max Zirngast. He remains in custody, charged with being a member of an illegal organisation. Zirngast told the court he was a post-graduate at Ankara’s Middle East Technical University, and that he had written for Toplumsal Özgürlük, but denied being involved with any terrorist organisation or illegal activity. In February this year Deniz Yücel, a German journalist writing for Die Welt was released from yearlong detention following charges of ‘inciting public hatred,’ and allowed to leave the country, though the case continues. President Erdoğan himself publicly labelled him a terrorist.

Numerous correspondents were interviewed for this article, freelancers as well as staff correspondents. All asked to speak anonymously, which in itself is deafening evidence of the pressures they are all under. “We risk being called purveyors of misinformation,” said one. Particularly anxious were those still having trouble renewing their press cards – which has the status of a work permit and a way many journalists obtain a residence permit. Others report that government suspicion of the foreign press was proving contagious, affecting people with whom they used to speak freely.

“They won’t say it’s because of fear, they just find excuses,” said one journalist. Another recalls being asked for ID, lectured on the streets and thrown out of venues by members of the public. “My sources who had then been happy to talk suddenly asked me what I was doing here,” according to yet another long-term resident when describing the change in atmosphere after the failed 2016 attempted coup.

That coup was the signal for a radical crackdown. Some 174 Turkish journalists are currently behind bars, and hundreds of media organisations have been shut down. The public has started mimicking the authorities, according to another journalist who was subjected to an attempted citizen’s arrest.

Being witness to events the authorities would prefer to see unreported is increasingly dangerous. Local authorities have started taking censorship into their hands, although it is unclear whether they do so under instruction or through their own initiative. One reporter was bemused to be told by the police officer that access to a court hearing was being denied at the express orders of President Tayyip Erdoğan himself. More serious was the journalist who was detained and physically threatened by police while trying to cover the Turkish military operation in 2015 to quell a civil rebellion in the largely Kurdish city of Cizre during which many people died.

One freelancer reported that journalists are particularly at risk whenever they deal with the police. From LGBTQI+ Pride marches to the weekly demonstrations held by the Saturday Mothers whose sons forcedly disappeared during the years of conflict in the Kurdish southeast, peaceful protests are often broken up. Journalists who try to cover those events are prevented from filming, taking pictures or even witnessing the event while reporting amidst tear gas or rubber bullets fired to the demonstrators. “They want to appear democratic, so they will let you report initially but stop you later,” the freelancer said. Since the Gezi protests, particularly western media have been accused of inciting rebellion, undermining the safety of correspondents reporting on the ground.

The wait for a press card is a source of particular anxiety. Rarely are you told the application has been refused. A long-term correspondent went from feeling cards were unnecessary, who now needs a one to cover sensitive situations or simply for events access, can wait months without news. This has become the norm, leaving reporters asking whether the delay was because of something they wrote or just a bureaucratic bottleneck. “It’s a good way for the government to keep tabs on where journalists go and monitor what they cover,” one journalist said.

Some correspondents have even taken to using fake IDs. Others resort to other methods to gain access, “Being French and a woman they let me through”. Others admit to self-censoring from fear that reporting without a press card will compromise their sources. Still, others think that not getting the card is itself newsworthy. “It doesn’t matter whether I get into courts or not. The fact is journalists are denied access. That’s the story.”

Freelancers who operate without the protection of a big organisation feel the risk more. “I was paranoid when I arrived,” said one. “When the police arrive at rallies, I stop taking photos to avoid drawing attention.” Almost all the freelancers reported using aliases when publishing, which ultimately affects their job prospects and credibility. Even so, pseudonyms afford them vital freedoms when writing on touchy subjects.

Stringers and permanent correspondents describe their contingency plans they never needed in place before. One journalist has a WhatsApp group of lawyers on stand-by around publishing time. “The difference is we have a place to go. Our Turkish colleagues don’t.” Trying to get the nuance right can be a problem. Turkey is not an easy country to explain, and journalists can find themselves between the rock of critical authorities and the hard place of editors who like stories to be “black and white”.

Of course, journalists face pressures from individuals to authorities wherever they go, despite supposed western civilities. A British political correspondent recalled the bullying by “spin doctors” they were subjected to. Even so, one correspondent said that if they were to write about Turkish politics the way they did about their home country, they would be in jail. Many said they would never avoid a story out of fear for their safety but at the same time “we all weigh up the risks nowadays,” one confessed. Others simply change tack. One freelancer moved from “advocacy journalism” to arts coverage. Working in the Turkish English language press can be particularly stifling. There, in-house censorship is rampant, “there are lists of buzzwords I can’t use.”

Many interviewed for this article felt that all the difficulties they faced were worth the risk. It’s not just the readers back home who read their work. With more and more Turkish outlets silenced, they described feeling a greater sense of responsibility. People in Turkey face an intolerant government, but many are still defiant. “They still talk.” One correspondent’s explanation for hanging on was straightforward. “I do it because Turkish journalists can’t.”

Photo: CNN’s former correspondent in Turkey, Ian Watson, was detained by the police while broadcasting live from the demonstrations marking the first anniversary of Gezi protests in 2014. © Bulent Kilic/AFP/Getty Images

It was meant to be a show of might, a showcase of Turkey’s economic status under the rule of the Justice and Development Party (AKP). The size and capacity of Istanbul’s new airport were designed to make Heathrow look small, Charles de Gaulle blush with embarrassment and O’Hare turn green with envy. From groundbreaking ceremony […]
Özgün Özçer
Asia, Turkey

Did he really commit a crime or was it simply, as most suspect, his turn to go to jail? Businessman Osman Kavala is known for his generous support to Turkey’s civil society and art world. Without his support, so many cultural initiatives would never have seen the light. But not everyone sees it that way. […]
Kültigin Kağan Akbulut