The escape from Afrin

Dozens of injured people are brought to the hospital in Afrin every day.


Doctor Azad does not want his face to be filmed. This approximately 50-year-old man does not provide his real name or age either. He is a cardiologist, but due to the insufficient number of medical personnel at the hospital, he was sent to work in the emergency ward in Afrin. Part of the staff fled when the situation in the region became dangerous.

Azad chose the opposite direction. He decided to go back to Afrin at the end of January, when the “Olive Branch” Operation began (it is led by the Turkish army). According to the London-based Syrian Observatory for Human Rights, at least 1050 people were killed in its aftermath, including 204 civilians. Almost two-thirds of the territories of Afrin is currently under the control of the Turkish army and its supporting militias, including the Free Syrian Army (FSA). In the coming days, maybe even hours, the last exit road from Afrin will be cut off.

This is a yet another, tragic chapter of the 7-year long war in Syria which has claimed at least 400,000 victims. 11 million, half the population of the country, were forced to leave their homes. Azad was living in Germany between 2013 and 2018 with a refugee status.

“First, I was learning German, medicine-specific vocabulary, then I started an internship and just before I left, I began working at a hospital. However, my conscience didn’t allow me to stay there”, he says.

He gave up on everything he had and came back home to Afrin. He lives in a three-room apartment, together with four other families. All are internal refugees who came to the city from a village near Afrin. 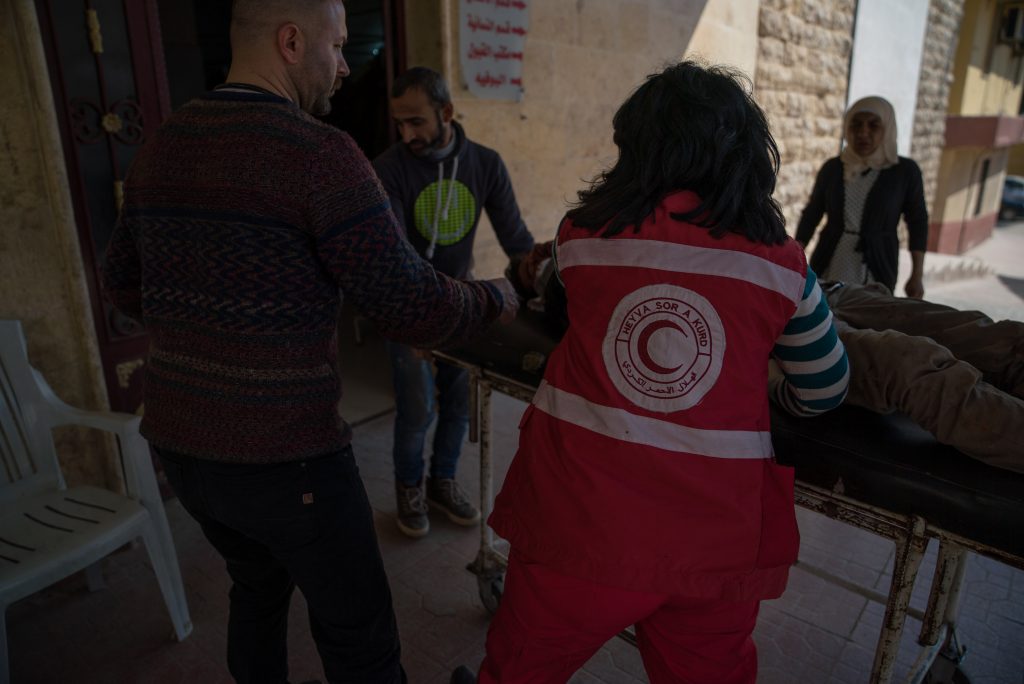 We are talking in a hospital staff room. There is bed, small table and a few chairs inside. More and more information about the situation in the region is coming from the always-on TV set. The ashtray is filling with cigarette stumps.

“Normally this room is smoke-free but because of the situation, we were given a permission”, says Azad.

The past week was very difficult for the medical staff at the hospital. Doctors had a lot of work and were exhausted. By Azad’s estimates, around 50 people with varying degrees of injuries arrived at the hospital every day. He believes that the last time the situation was this bad was at the end of January when the Turkish operation in Afrin began.

“We would send people with ordinary sicknesses to other hospitals as we were treating only patients with wounds suffered as a result of the war”, he says.

Shrapnels are the main cause of death and injuries. Bombs and artillery shells often hit civilians instead of the Kurdish fighters from YPG or YPJ. The aircrafts often catch the attention of the people in Afrin. Many times I saw the bystanders stop or slower their pace to carefully examine the sky. When I was at the hospital, on March 12th, the doctors described the day as ”calm”, but nevertheless at least 7 injured people (including 4 civilians) were admitted during the three hours I spent there. They all suffered from shrapnel wounds. Two men were hit in the face (one bleeding heavily from his mouth), another woman was hit in the leg. One of the fighters brought to the hospital had a piece of flesh missing in the abdominal area.
“He is already dead”, said a doctor I was talking to at the time.

Although the doctors and nurses rushed to help, they didn’t manage to save him – he had lost too much blood.
This helplessness is what Azad remembers as the most terrible experience – when the wounded come to the hospital often it is already too late because of the excessive blood loss.

“Children would die on our hands at the hospital. We all cried”, he says. 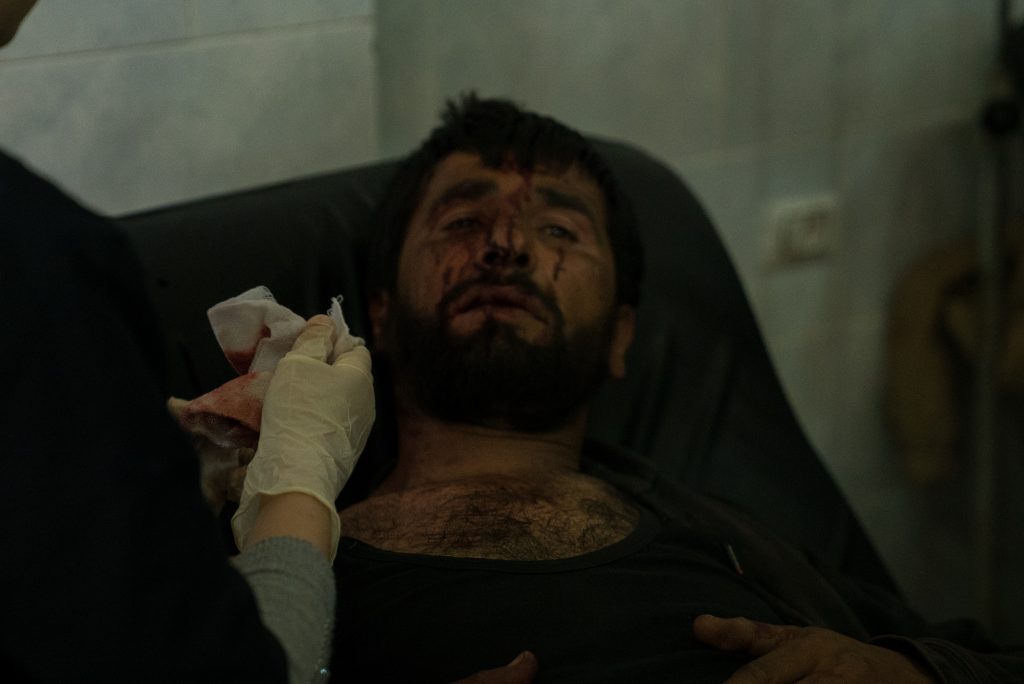 To take the family away

Azad seems cheerful but when I talk with him, I feel his uncertainty. He admits that he would like to take his family out of Afrin but so far he didn’t find a way to do it. He would need to get to the territories controlled by the Syrian government. In order to do that, people must bribe their way through numerous checkpoints. According to the inhabitants of Afrin and the surrounding villages, the cost varies between $400 to more than $1000 per person. By the estimates of the London-based Syrian Observatory for Human Rights, at least 16,000 people managed to make it to the regime-controlled territories. Azad is puzzled as for why it is so difficult to leave Afrin.

His father suffers from cardiac problems and has mobility issues.

“He is very old. So is my mother, who also has diabetes. We need to leave but we won’t make it on foot”, he admits.
His wife and two children are also in Afrin.

“They have been crying ever since the shelling started”, he says. 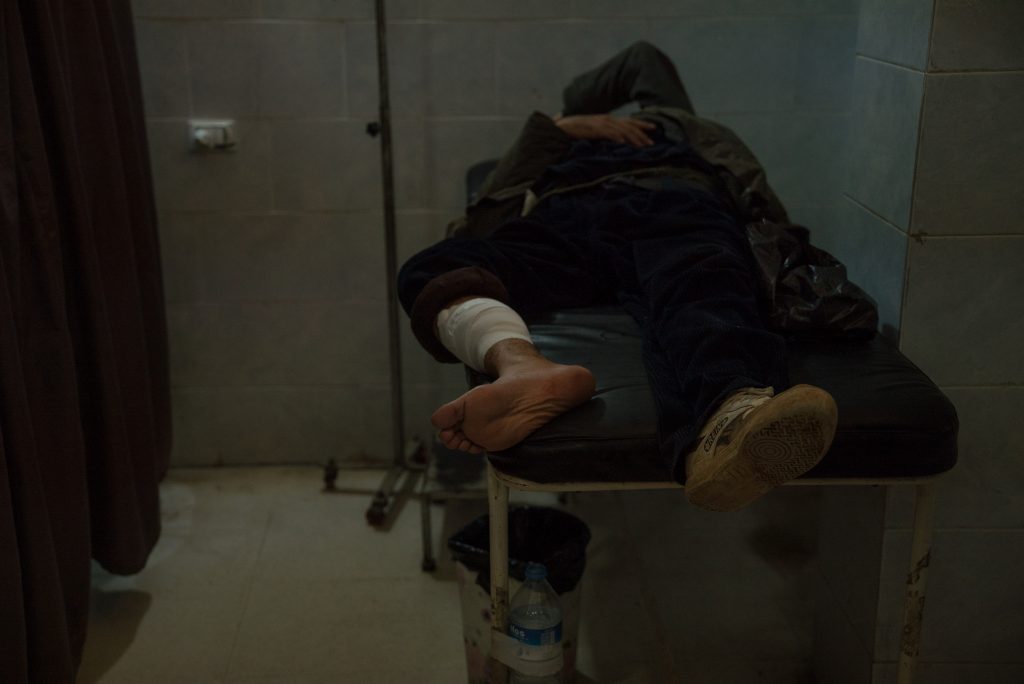 When we said goodbye to each other, Azad took my phone number. We were supposed to get in touch with each other on WhatsApp as the Internet, bad as it is, is still more accessible than the mobile phone coverage. In order to meet someone, one has to set up a meeting in advance at a specific place and wait, hoping that the person comes. Other than that, one can just meet people by accident or know where to find them.

The upcoming war in Afrin causes panic – the residents are packing all their belongings into their cars. It is usually not that much – mattresses, blankets, mats, some pots, dishes, TV sets. Very often the belongings don’t take up even half the space in the pickup trucks. The streets are still crammed but it is evident that a significant part of the population is getting ready to leave. More and more people beg and sleep on the streets because the internal refugees from the surrounding villages have nowhere to go and the flats are already overcrowded.

Azad did not reach out to me. I thought that it was because of the commotion in the city, his hard work and the lack of Internet access. I came to see him in the hospital twice, both times only to be told that he wasn’t there. Nobody knew the reason. Maybe he had finally found a way out.

Photos in the text were taken in the “Afrin” hospital and depict the injured with shrapnel wounds.

Turkish troops and its supporting militias are getting closer to the city.
Paweł Pieniążek