Self-defence in fear of provocations

The Tatars’ concerns were justified. A Ukrainian military unit, occupied by the Crimean self-defence and Russian soldiers, was located near the area inhabited by them. On the day of the referendum there were groups of masked, uniformed men with clubs, some of them had pistols. Russian guards were reloading their automatic weapons and aiming at journalists who were having cameras. 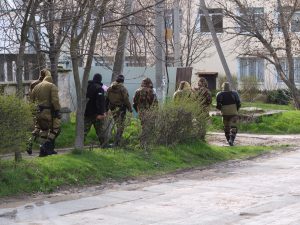