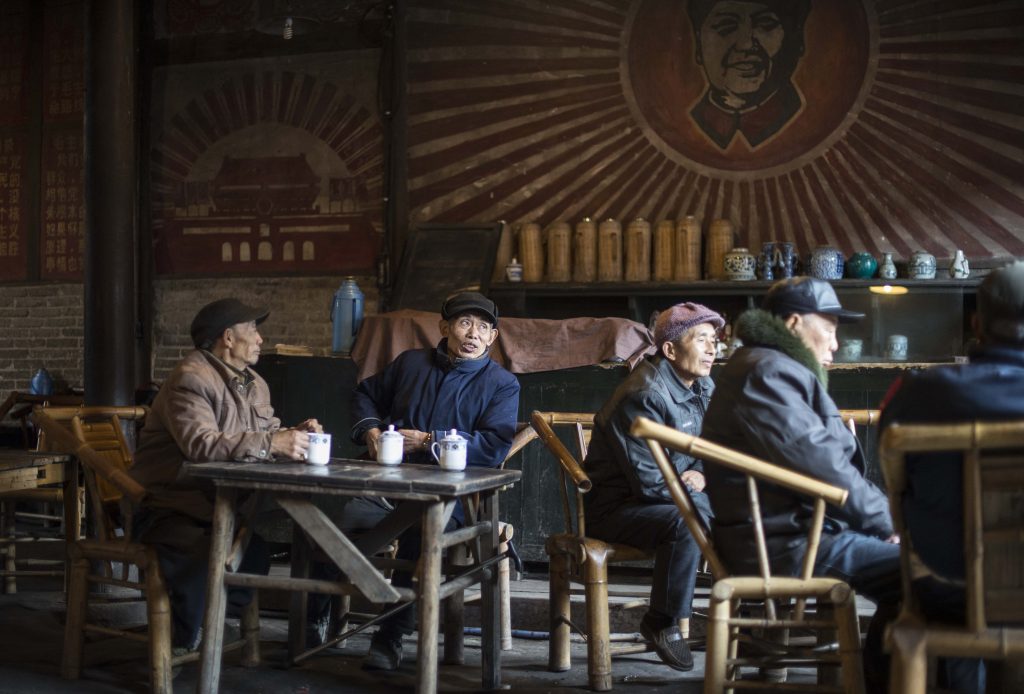 Tea or Coffee? What a Beverage Tells Us about China today

Chinese people drink 2.1 million tonnes of tea every year. The infusion has defined traditions, history, even maps. Surprisingly, in the camellia kingdom, Starbucks opens a coffee store every 15 hours.

Near the wall of what’s said to be the oldest teahouse in China, there is a short, stooped over and nicked barber wearing a blazer with the sleeves covered so as not to get dirty. He is shaving the head of a client next to a group of men who are playing cards and drinking tea. A woman is hanging noodles out in the street, and there are hanging sausages from a cart.

Guanyin Pavilion teahouse or simply the “old teahouse” like some of its customers know it, is located in Pengzhen, a town of one-storey houses with open windows and family businesses on the outskirts of the capital of Chengdu, the capital of China’s Sichuan province, the spicy kingdom. Travelling here is like travelling in time.

A large, red portrait of a smiling Mao Zedong on the main wall, already discoloured, watches over the customers. Most of them are men, retired, wearing coats and hats. They spend a day in front of their teacups with lids so that the heat and aroma do not spread. The teahouse is made of wood. It smells of cigarette smoke, of coal that is used to heat the teapots and flower tea.

Mr Wang Yueping, 50, says that he spends between three and four hours a day in this old teahouse. “I’m retired,” he explains. He is from the town. His father came to this old teahouse, and so does he. “I fell in love with tea when I was ten years old,” he says.

A man smoking a pipe is watching a Chinese soap opera on TV. Three aged men are having an animated conversation; some are playing cards. Another is sleeping with his mouth open. A lady wearing an apron is preparing the teapots and putting them to heat on the coal oven. Throughout the town, there are dozens of teahouses, where neighbours hang out and play mahjong. Tea has been one of the loyal components of Chinese leisure for centuries.

The Chinese are the largest consumer of tea in the world drinking 2.1 million tonnes of tea every year, according to FAO (2016). That is 38.6 per cent of world tea consumption. India, where people drink yearly 1.05 million tonnes, is the second largest tea consumer.

Sichuan and Yunnan are believed to be the first tea-producing areas in the world. Its origin is involved in romanticism. According to Chinese legend, the emperor Shen Nung discovered tea accidentally. He was in the mountains collecting herbs, sat under a Camellia tree to rest and boiled some water to drink. Then, some leaves fell into its hot water and tea was discovered.

Less known than the legendary Silk Road, during centuries, tea drew a rough trade route at more than 2,000 kilometres length that meandered around the Sichuan Mountains. Known as the Ancient Tea Horse Road, it served for the exchange of tea for horses between the fertile regions of Sichuan and Yunnan with Tibet. It was travelled by dozens of muleteers on foot that walked in caravans with the mules loaded with tea and returned on horseback.

Not so long ago, the refreshing drink, or the desire of it, led to the war between the United Kingdom and China, (1839 to 1842). “There was a time when maps of the world were redrawn in the name of plants”, Sarah Rose narrates in the prologue of her book “For All the Tea in China: How England Stole the World’s Favorite Drink and Changed History”. “When two empires, Britain and China, went to war over two flowers: the poppy and the camellia”, she continues.

It was the nineteenth century. China had tea. The United Kingdom wanted tea, but the Chinese did not want British products, they wanted to be paid only in silver. Then Britain decided to trade something that people liked: opium. Soon the consumption of opium caused havoc in China, and in 1830 the Emperor ordered to destroy the cargo with the drug that had arrived. The confrontation ended with the Nanking treaty by which China leased Hong Kong to the United Kingdom.

Talking about tea in China is also talking about tradition. The thermos bottles with hot tea are everywhere: into the trains, into the offices or in the hands of every security guard who endures the long night drinking sips of tea.

Behind “the tea” track

“Tea leaves are considered the ‘father of tea’, and water the ‘mother of tea’. Both are equally important for a quality brew”, says Eli Zigdon, 46, an American graphic designer from Stamford, Connecticut, and a tea enthusiast who has travelled China several times learning everything about the aromatic beverage. In a hostel in Shanghai, where he spent some days before a new ‘tea trip’ to Hangzhou, he talks about tea as a person talks about their first love.

The first time Eli Zigdon tasted tea was by chance. Upon a business trip in the year 2000 to China, “a friend of mine pulled out two teas that he brought back to my house in Stamford,” he says. He claims that tea session changed his life. “I started to learn everything I could about this mighty leaf”, he explains.

In 2011, finally, he travelled to China. “I have heard much about the physical and mental effect on the drinker of Pu’erh tea made from old growth trees, but I have yet to experience it for myself,” he says. “These old tea trees, with deep roots penetrating lower layers of sediments, are known to produce leaves that are packed with what the Chinese call “Qi”, or life energy,” he continues. Then, Mr Zigdon stumbled upon a tea shop that specialises in Pu’erh, and the tea master served the tea. “Down went five small cups of tea, the size of shot glasses, which revealed the unmistakable power of Qi”, he recalls. After drinking it, he describes a feeling of “waves of energy, vibrations, profuse sweating, deep breathing and enhanced human interaction.”

In these years Mr Zigdon has travelled several times to most important tea regions in China. He highlights three teas and their regions: “Long Jing (dragon well) green tea from west lake area, in Hangzhou, Zhejiang province”, that “is considered the best green tea in the world, from an absolutely beautiful city in a region obsessed with tea”, he says. “Da Hong Pao (Big red robe) oolong tea from the stunning Wuyi mountains, in Fujian province. Moreover, “Pu’erh tea from southern Yunnan Province” that it is “the ground zero of tea evolution over millions of years”. “From here tea spread eastward to many regions in China and westward to the rest of the world”, he adds.

– How can you recognise a quality tea? – we asked.

– Water, ware, heating and mood are essential to have proper tea – the tea enthusiast explains. Firstly, “the tea leaf should be what is considered “living tea”, that means: “No agrochemicals were used, seed propagated, the surrounding ecosystem is rich and biodiverse, no human irrigation or intervention. The plant had sufficient room to grow, and processing was done by a tea master who approaches the craft out of respect, reverence and love for the tea,” he continues. Besides, “as tea is 99% water, the quality of the water will dictate the brewed teas quality”, he says. “The quality of the teaware (teapot and cups) is important as well.” Also, “the heating source tremendously affects the quality of the tea.” Finally, “which brings us to the spiritual aspect of brewing tea,” he adds. He mentions a saying that goes: “To brew better tea – become a better person”.

Starbucks opens a store every 15 hours in the tea land

Skyscrapers that raise in record time, high-speed trains that connect the main parts of the country, a middle class that grows… China has changed a lot in a short time, but when we asked entrepreneur Henk Werner, 52, about the changes that he had seen in Shenzhen since he arrived, seven years ago, he replied with a word: “Coffee.” “Before it was impossible to find coffee in the city and now there are Starbucks everywhere,” he said.

Surprisingly, in a country where tea adopts spiritual dimensions, one of the international chains that are expanding most rapidly among the Chinese middle class is in coffee. Since Starbucks first installed in China in January 1999, it has opened 3,600 stores in more than one hundred fifty Chinese cities, according to its website. Today you can find Starbucks in the shape of a temple or in symbolic places like Beijing’s Tiananmen Square – the expansion is unstoppable.

The figure is still lower than in the United States, where the coffee chain already has more stores than McDonald’s –14,300. But “China is Starbucks fastest growing market with a store opening every 15 hours”, according to the company. Moreover, it plans to have 6,000 stores by 2022. They have chosen China also, specifically, Shanghai, to open its biggest store in the world, the Starbucks Reserve Roastery, in a 2,700 square-meter building.

“No Western company or brand is better positioned to evolve with the rapidly expanding Chinese middle class”, said Kevin Johnson, Starbucks president and chief executive officer in a press release. That is precisely what 400 million people in China claim, who already constitute the middle class, according to China’s statistics agency.

The international chain not only sells coffee, but it also wants to sell a status symbol. Evidence of it is the map of Starbucks stores in China, with most of them in the East of the country, what also could be the socio-economic map showing the gap between rural and urban regions or even neighbours.

On Shanghai-Beijing train the hostesses offer Starbucks coffee while in the West of the country finding a coffee still is a complicated challenge. Starbucks already has more than 600 stores in Shanghai. In Xining, the capital of western China’s Qinghai province, with 2.2 million people, it has only three outlets. The chain has fostered in cities such as Shanghai to multiply the business of beverages based on coffee and sugar, with music and Wi-Fi. The same does McCafe, Costa Coffee and coffee startup Luckin, a new coffee competitor that plans to open new 2,500 stores this year, according to Reuters.

Could China become a coffee nation?

For the moment, in the tea kingdom, it is already possible to sell coffee for $5. It takes place in a country where, despite the changes, 27.2 of the population – 373 million people, according to the World Bank, live with less than 5, 50 dollars a day.