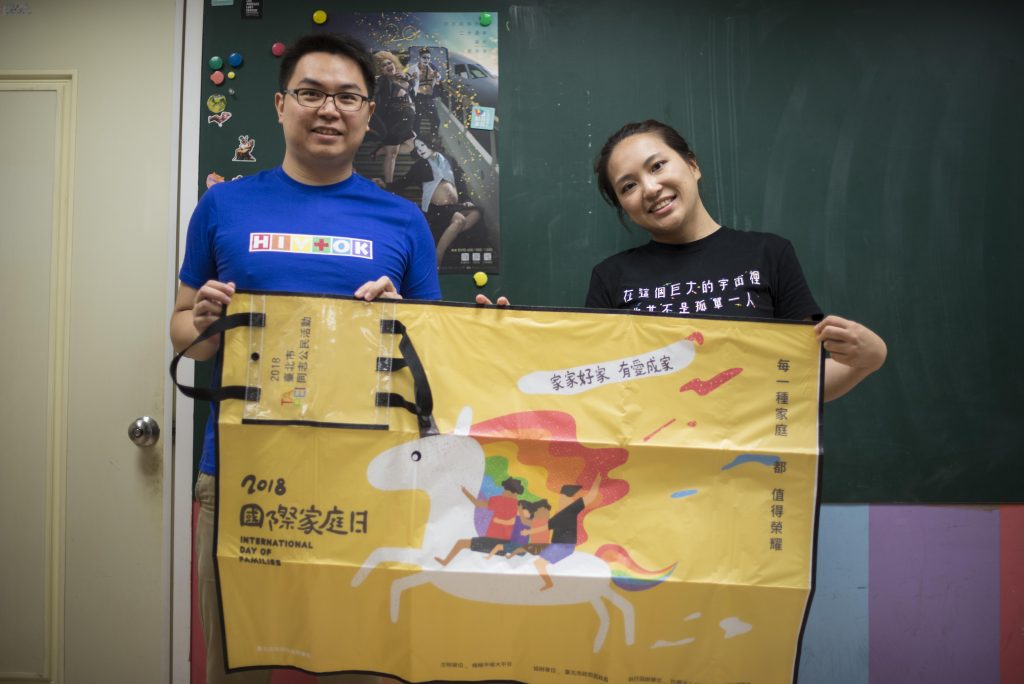 Taiwan Referendum: It could be the First place in Asia to approve same-sex marriage

In 2017 Taiwan was about to change history. The highest court in the island (called “Legislative Yuan”) ruled in favour of same-sex marriage. It argued excluding same-sex couples from marriage violated Constitutional articles relating to freedom of marriage and equality. It gave two years to Taiwan parliament to amend or enact laws. Otherwise, the legislation will change by default. It would become the first place in Asia to legalise same-sex marriages. It had been a long path.

In recent months, events have changed their course. The conservative organisations have mobilised before the Parliament pronounces. A coalition of associations called The Coalition for the Happiness of Our Next Generation has collected more than 600,000 signatures to launch a three questions referendum against the same-sex marriages. It will be held on November 24, the day that Taiwanese will elect their mayors.

On 24 May 2017, the day that Taiwan’s high court ruled in favour of same-sex marriage, Sih-Cheng Du, an activist at Hotline NGO, the largest lesbian, gay, bisexual, and transgender (LGBTQ) organisation in Taiwan, was in the office of the association.
“We organised a gathering for listening to the Grand Justices’ ruling in the office”, he recalls. The office is decorated with rainbow flags and posters. A multicoloured long hair unicorn rides with a family in tow in one of them.

Du reminds it was an exciting day: “We were so happy to see this result, feeling that there’s hope in Taiwan’s future”. “After the event, we were all exhausted, and we did not go out to celebrate it, but I know some organisation did it”, he adds.

It was not the end.

“What the court decision means is that the current civil code is unconstitutional, but it is only an interpretation that Parliament must approve or not”, Joyce Teng, manager of Lobbying at Hotline, explains.

In Taiwan, as elsewhere in the world, changes divide society. While Sih Cheng felt thrilled thinking about the future, hundreds of members of conservative Christian associations such as The Coalition for the Happiness of Our Next Generation gathered at the entrance of the Constitutional Court to protest. They are behind the November 24 referendum. 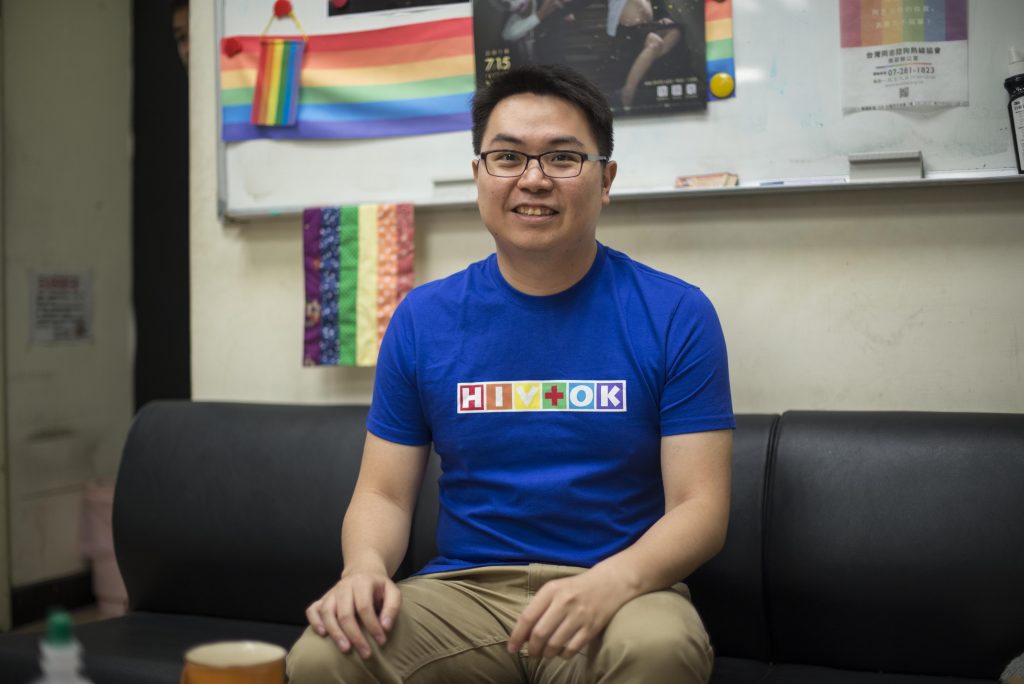 LGBTQ activist Sih-Cheng Du at the office of Hotline NGO in Tapei during the interview.

A spokesperson of the Coalition for the Happiness of our Next Generation explained “Outriders” their reasons for this referendum: “From the first reading to second reading of the Legislative Yuan and then the results of the interpretation of the Constitution last year, we’d seen that the government made hasty decisions without careful assessment”. She said they had France as an example: “They held a series of public hearings for half a year for letting people know this subject fully.”

There will be three questions in the referendum, according to the Coalition’s website:

Two questions refer to the fact of same-sex couples can get married. A third question is about LGBTQ education. “Taiwan has a law called ‘Gender Equality Education Act’, passed in 2004 that says every school in Primary and Secondary must teach on LGBTQ issues at least four hours each semester”, Teng explains.

What ‘no’ voters say

“When they ask in a referendum about to protect us it may sound like they want to protect same-sex couples, but what they want are different laws for each one; they do not want our marriage to be like theirs”, Joyce Teng laments. She says these organisations aim gay and lesbians unions receive special treatment. “But the important thing is not our will to get married or not, but having the same rights as other people”, she adds.

Humanitarian organisations such as Human Rights Watch (HRW) are concerned that suppressing LGBTQ sensitive content in the first years of school affects the number of cases of bullying, a problem especially worrying among LGBTQ people. “Comprehensive sexuality education is a vital anti-bullying measure”, says Graeme Reid, director of Lesbian, Gay, Bisexual and Transgender Rights Program at HRW. “Bullying is a chronic problem with long-term effects, and lesbian, gay, bisexual and transgender kids are badly affected by bullying”, he adds. “Human Rights Watch research around the world shows that vulnerability as adults can often be traced back to bullying as children”.

UNESCO analysed school bullying, violence and discrimination by sexual orientation and gender identity in the Asia Pacific at ‘From Insult to Inclusion’ survey and it concluded: “The response in many Asia-Pacific countries is currently inadequate.” It found that “There is a need for comprehensive programmes that are based on evidence and supported by policy; strengthened partnerships and more systematic data collection of the situation and the response.” For instance, a 2009 online survey of ‘homosexual and bisexual in secondary schools in Hong Kong SAR among 392 lesbians, bisexual and gay students provided some of the earliest data in East Asia. 42% reported verbal bullying and name-calling; 40% said social isolation; 13.5% reported physical harm and sexual harassment. 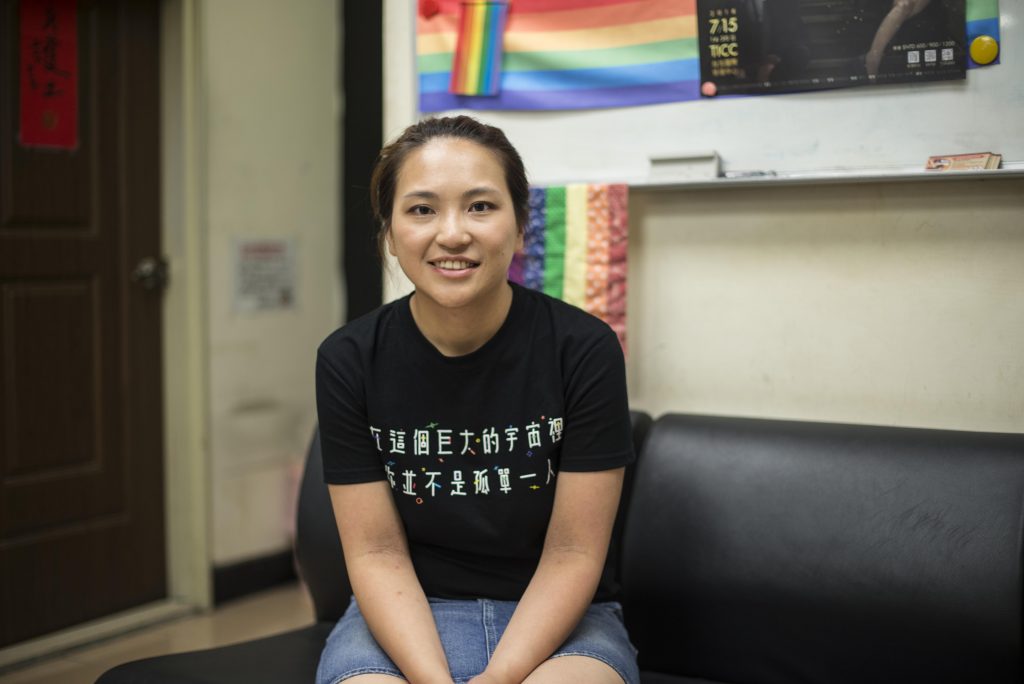 Joyce Teng, manager of Lobbying at Hotline NGO in the office in Tapei.

Scenarios after the referendum:

“The referendum will be passed if ‘yes’ voters are more than ¼ qualified voters which mean about 4,9 million votes, and they are more than ‘no’ voters”, Joyce Teng explains. “In case of the three referendum questions were passed, our government would propose some separate law for same-sex marriage”, she adds. “Of course we hope the result will be good, but honestly it’s hard to say. The opposition uses scare tactics and keeps spreading fake and false information about marriage equality, gender education and LGBTQ people, which makes people, especially the seniors, become more hesitant to marriage equality and gender education”, Sih-Cheng Du assures.

Opponents of equal marriage appeal to the traditional family to warn of the risks of new unions. According to them: “Same-sex marriage isn’t an independent project, but involves wide range areas, including adoptions and surrogacies. In contrast Taiwan, however, has only a few public hearings”, Coalition for the Happiness of Our Next Generation argues. They defend: “Launching this referendum has a deeper significance, to arouse the Taiwanese attention to family and education”.

They are similar arguments to those that were behind the referendum that recently failed in Romania. They wanted to change the definition of “family” in Romania’s Constitution to restrict the unions between a man and a woman instead of “spouses”.

Should everyone vote on everything?

The referendum also opens another debate: should everyone vote on everything?
The spokesperson of HRW does not think so: “Who gets to enjoy human rights should not be decided by popular vote.” “Everyone is entitled to the same human rights, by being human”, he adds.

Meanwhile, “the Marriage Equality Coalition (which Hotline is also a member) is doing the ‘No campaign’ to these three anti-LGBTQ referendums”, Sih-Cheng explains. “The coalition trains volunteers and encourages people to have more dialogues on marriage equality, and gender education and it will also produce more short films and ads to let more people understand the real stories of LGBTQ people and their families”, he adds. 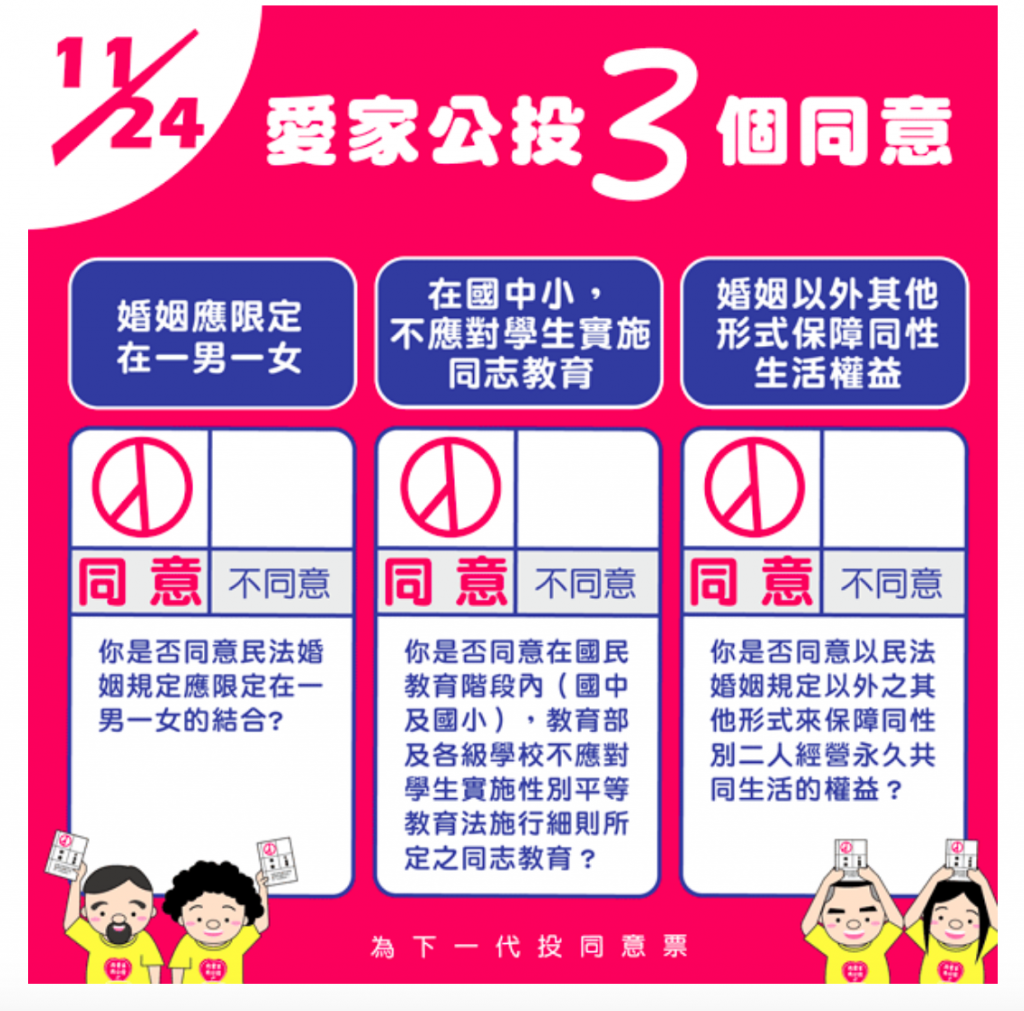 The Coalition for the Happiness of Our Next Generation advertisement for anti-gay marriage referendum.

The first one in Asia

There are 26 countries in the world where same-sex couples can get married. The Netherlands (2000), Belgium (2003), Canada (2005), Spain (2005) and South Africa (2006) were the first countries in the world to legalise it. The first American country was Argentina (2010). The latest of the list are four countries that legalised same-sex marriage in 2017: Malta, Germany, Finland and Australia. In Asia, Taiwan would become the first place to get this right.

On the way to this interview, this journalist verified that Taiwan is more open-minded about LGBTQ couples than other places in Asia. Two men walk through a pedestrian crossing holding hands. On the terraces at the Red House District, a large outdoor drinking area in the centre of Taipei, the rainbow flags adorn some visibly ‘gay-friendly’ bars in which groups of friends drink or smoke shisha. On the streets and public transportation there are some advertisements of saunas for men and the annual gay pride parade, that was first held in 2003, is crowded every year.
“Taiwan is probably more open than other places in Asia, broadly speaking, but not concerning representation”, Teng says. “But in Korea and Japan, for example, some politicians admitted being LGBTQ, something that has not happened here”, she continues. “However the main taboo is still coming out at home,” Du adds.
The next Taiwan gay parade will take in Taipei on October 27th, 2018, only some weeks before then the anti-gay referendum will be held.

Photo: Taiwanese LGBTQ activists Sih-Cheng Du (left) and Joyce Teng (right) after the interview at the office of Hotline NGO in Tapei.