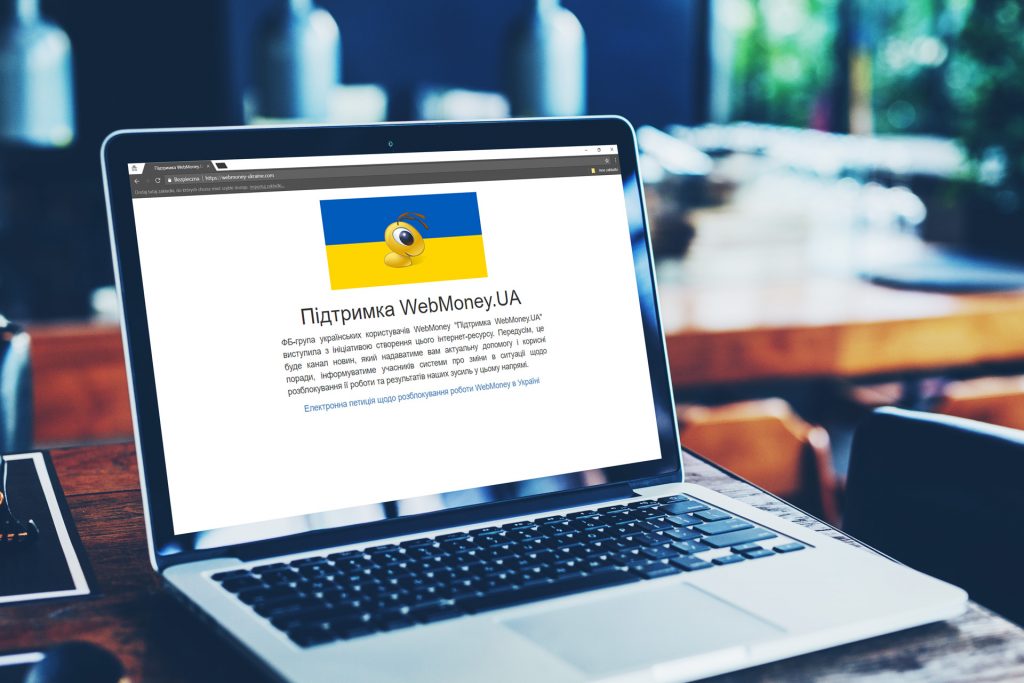 Sanctions have been imposed on WebMoney, a popular in Ukraine online payment settlement system, by the Ukrainian authorities. The company found itself on the same list as many other enterprises and private individuals. Thus, bank accounts of 4 million Ukrainians were blocked. Such unexpected decision caused problems not only for private persons, but also for small business, which got used to e-cash and e-banking. WebMoney has to face sanctions for three years. Will the Ukrainians have to wait for their money till 2021?

The relevant resolution regarding the introduction of new sanctions was adopted by the National Security and Defence Council of Ukraine (NSDC) on May 2, 2018. On May 14, President Petro Poroshenko signed a regulation concerning the sanctions. The list of people and companies on which sanctions were imposed was published ten days later.

The next day the National Bank of Ukraine deleted the Ukrainian clearing system license of WebMoney. On May 25, people who could not receive their salaries and the entrepreneurs who could not get the money from their serviced contracts, informed the public opinion about the situation.

Over 36 million customers are registered on WebMoney, 4 million of them are from Ukraine. Annually, financial operations exceed 18 billion dollars within the WebMoney system. However, the assets’ value of Ukrainian customers is not known.

Ukrainian banks keep the money of their clients on blocked accounts according to the regulation of the National Bank of Ukraine. WebMoney ensures that the money will not disappear and promises that by May 24, 2021, it will convert the WMU (WMU is a WebMoney Transfer title unit that is a Ukrainian Hryvnia equivalent) to WMZ (a WebMoney Transfer title unit that is an American Dollar equivalent).

Despite the official regulations, one can find proposals in the internet to withdraw the money right now. However, it is connected with losing 20% of the cash withdrawal for the cost of the commission. WebMoney itself calls on customers not to make hasty decisions and ensures that the company is looking for a way to solve this problem.

“We want to assure you that we will do everything possible to defend the interests of our customers and fulfil all the obligations” – one could read on the Ukrainian WebMoney website on May 25.

WebMoney is not the only company that has to deal with the Ukrainian sanctions. The list of sanctions includes natural and legal persons who are associated with the annexation of Crimea (or run a business on the Peninsula after the annexation), who are somehow related to the Donbass war and Ukrainian citizens who supported the regime of President Viktor Yanukovych and escaped with him to Russia. Last year, Ukrainian sanctions were imposed on 1228 natural persons and 468 legal persons, this year it has already been imposed on 1748 natural persons and 756 legal persons.

It was a surprise for many that some people were added to the list so late. For example, Serhiy Kurchenko, one of the youngest Ukrainian oligarchs. During the presidency of Viktor Yanukovych, he was considered as an unofficial banker of the Yanukovych family as well as a careerist. Kurchenko escaped to Russia with Yanukovych and continued his business there.

Among the well-known citizens of Russia that have been put on the list lately by the Ukrainian authorities are: The Head of Gazprom Alexey Miller, a billionaire Oleg Deripaska and the Crimean Bridge contractor Igor Rotenberg. People subjected to sanctions are also other Russian businessmen who are considered to be in close relation with the Russian President Vladimir Putin.

Why is it about WebMoney?

WebMoney was started in 1998 and it is not officially registered as an e-payment system. From a legal point of view, the system transfers property rights, which are accounted using special units of account.

In Ukraine, the system began to operate in 2003. Ten years later, during the presidency of Viktor Yanukovych, WebMoney encountered its first problems in Ukraine. In June 2013, the Ministry of Revenues and Duties carried out an audit in the company’s offices. At that time, the clients’ accounts were also blocked.

The accounts were reopened after the Revolution of Dignity (2013-2014). What is more, the new Ukrainian authorities placed WebMoney on the list of payment systems of the National Bank of Ukraine, and the State Saving Bank of Ukraine (Oschadbank) became the service partner of WebMoney.

That is why imposing sanctions on WebMoney right now was such a huge surprise. There is no official explanation from the National Security and Defense Council of Ukraine (NSDC) why the WebMoney company has been blocked. Ukrainian media claim the company is accused of “ties with the Russian aggression in Ukraine.” The company’s centre is located in Moscow, but the company managing the whole system is registered in Vilnius. WebMoney employees are convinced that it is about controlling their company using political measures.

The Ukrainian WebMoney published a statement on its Facebook page: “Certainly, the operations of such a significant player on the market could not fail to attract the attention of some representatives of the authorities, who somehow tried to block our system in Ukraine and channel our clients’ funds to different financial institutions. Current events resemble the ones from 2013, when our system accounts were blocked by the decision of the criminal authority of Yanukovych. It is understandable that nothing has changed since then: and now we can observe that the authorities prevent the system from working by a political decision, without any legal basis”.

Ukrainian experts commenting on the situation in the media do not understand why the sanctions were imposed on WebMoney four years after the Donbas war had begun. A newspaper “Economichna Pravda” points out that blocking WebMoney is convenient for the owners of the Ukrainian payment systems.

Meanwhile, an electronic petition regarding the restart of WebMoney has been registered on the website of the Ukrainian President. It needs 25 thousand signatures in order to be considered by the President Poroshenko.