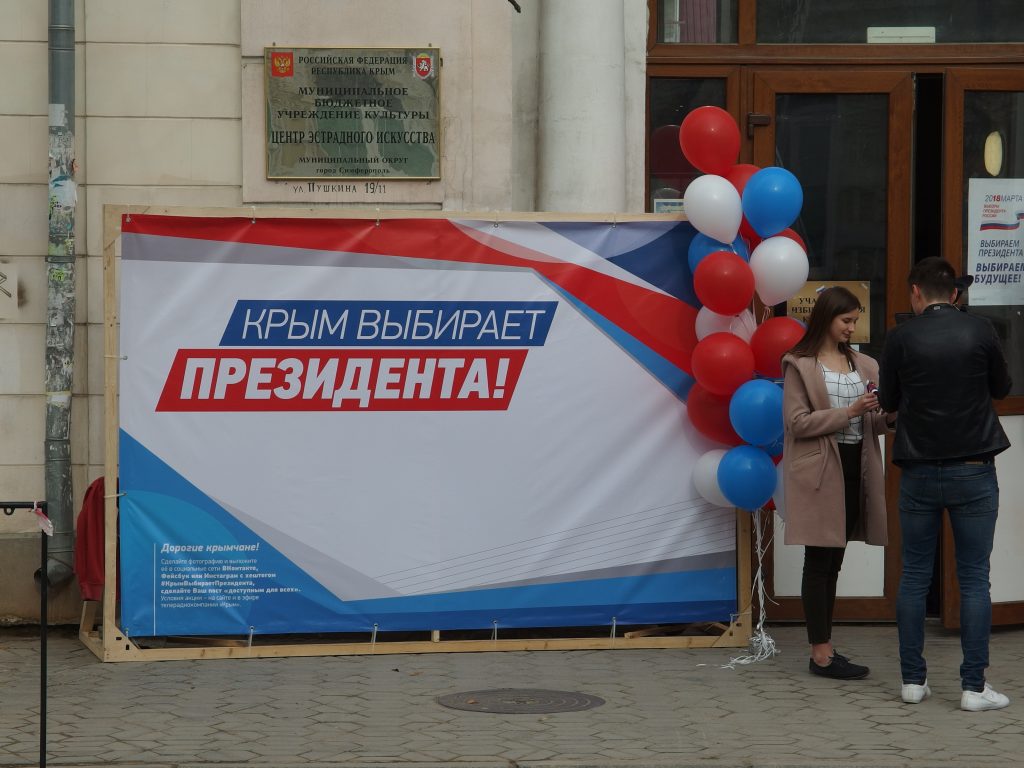 The Ukrainian media compare the results of the vote with the ones in the referendum that took place on March 16th 2014 and legitimized the Russian annexation of Crimea. Then, according to the official records, 96.8% of the voters in Crimea and 95.6% in Sevastopol were in favor of their regions becoming a part of Russia. The turnout in the last presidential election on Sunday reached around 71.55% which is almost 10% less than during the so-called referendum.

In February 2018 the Russian press agency RBK reported that, based on the sources close to the Kremlin, the authorities of Crimea will try to ensure that the turnout in the election on the peninsula was similar to the one during the referendum. In order to accomplish that goal a decision was made to organize official celebrations of the “2014 Crimean spring” (which is another name used for the annexation of Crimea).
The RBK report forecasted that “political agitation will increase in the spring, especially in Crimea”. The Kremlin wants to have a high turnout, especially in that region”, said the report.

The highlight of the election campaign in Crimea was the visit of Vladimir Putin. The Russian President showed up at a construction site of a road bridge that will connect Crimea with Russia. Interestingly, during the meeting with the construction management, it was announced that the bridge will open in May 2018 rather than in December, as it was previously reported. In the evening the Russian President spoke at a meeting in Sevastopol.
The annexation of Crimea is a symbol of the victory of Putin’s policies for which Russia is now paying a high price, mainly because of the sanctions imposed on the country. The 2018 presidential election was held on March 18th, which marks the anniversary of the day when the act of Crimea’s annexation to Russia was signed.

One common denominator between the 2014 referendum and the 2018 election is the lack of observers from international organizations (such as the OSCE). Thus, both the results and the course of the election are difficult to verify. Regardless of that, many countries refused to recognize both the results of the 2014 referendum and the most recent vote. They claim that Crimea was illegally annexed to Russia and, according to the international law, it remains a part of Ukraine.

Interestingly, the pro-Russian inhabitants of Crimea commented on the social media that the “turnout was average”. The election was accompanied by various exhibitions, for example, children’s art was presented. Those who came to vote for the first time were given gifts while the ones who took part in the 2014 referendum in Sevastopol received commemorative medals.

Tatars have also compared the results

The leaders of the local government of Crimean Tatars have urged their countrymen living on the peninsula to boycott the vote. Similar announcements were broadcast on the ATR TV station, which is officially banned in Crimea but nevertheless watched by a lot of Tatars.

Erfan Kurdusov, who left the Crimea in 2014, told me: “A trip to Simferopol was the longest journey my brother has ever made from his village. He is a taxi driver, a rather unsophisticated, uneducated man who has not seen anything nor travelled anywhere. I sent him a text saying: please don’t go to vote, and pass the message to the relatives. He replied to me, offended, saying that I treat them like a “bunch of idiots” and they very well know what to do and nobody thinks of voting”.

He believes that it demonstrates how the ordinary people treat the Russian election. Erfan adds that no one from his or his wife’s family is going to vote and that amounts to … between 800-1000 people.

The Tatars living in Crimea complain about the persecutions coming from the Russian authorities. Three friends of Erfan have received calls from sociological companies asking if they are going to vote and why not. This pressure also manifests itself in threats that have been made against the people working in the public sector. The authorities of Mejlis, the Tatar’s local government, whose activities have been suspended in Crimea by Russia, have reported that regardless of the persecutions, the majority of Tatars did not take part in the election (nor the referendum). On the voting day they simply remained at home or visited the relatives.

Zajir Smiedliayev, an inhabitant of Simferopol and the head of Central Electoral Commission of Qurultay of the Crimean Tatar People claims that no more than 10% of Tatars actually went to the polls.
However, this claim is hard to verify, too. Elwira, a Crimean Tatar journalist who I talked to a couple of days before the election told me that the Tatars who are somehow affiliated with the national administration will rather take part in the vote. “Because they have no other choice. Although, actually, there is always some alternative. But these are individual choices which I don’t have a right to judge, since I am not living in the Crimea now”, she adds.

At the same time, she was arguing that most of her countrymen will not vote as they have not experienced a single good thing from the Russian government. “There are arrest and revisions. The Tatars think that if the Russians didn’t come for me today, they will tomorrow”, says Elwira.

She believes that the appeals of Mejlis, urging to boycott the election worked but it was not the only factor. What also mattered are the statements by the international community stressing that Crimea remains a part of Ukraine and that human rights are violated on the peninsula, especially with regards to the Tatars.

In recent weeks, the Ukrainian authorities have also called the inhabitants of Crimea not to participate in the “illegal election on the peninsula’s territory”. Adding to that, Kiev warned the Ukrainians (as many people in Crimea still hold the Ukrainian passports), that their participation in preparations for the vote (e.g. being members of electoral commissions) will be perceived as cooperation with Russia in illegal activities which is punishable by law.

On March 19th, Pavlo Klimkin, the Ukraine’s Foreign Minister during his meeting with his counterparts from the EU countries handed over a list of 140 people who, according to the Ukrainian authorities, have organized “the illegal election in Crimea”. Ukraine expects that these individuals will face the consequences.