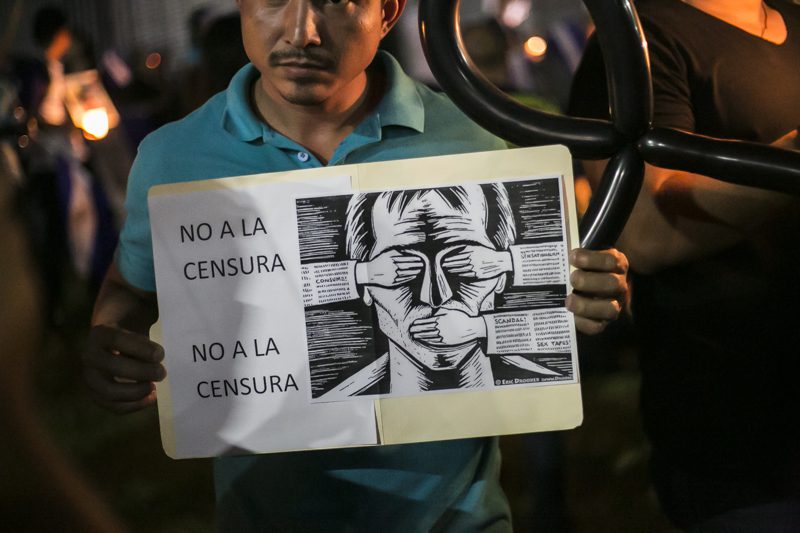 The Nicaraguans have been protesting for 58 days against the President of Nicaragua, Daniel Ortega. 139 people have already died in the aftermath of clashes with security services. Ortega, however, refuses to step down and does not agree to hold early elections.

Civilians have erected barricades in the biggest cities of the country. They have been blocking the passage for more than 6,000 trucks with goods from Central America. Masaya, a city with Indian history, lies 35 km away from the capital. As many as 200 trenches are on the streets there. In recent weeks, this city has become a symbol of resistance. According to a historian, Mónica Baltodano, this is due to the fact that its inhabitants are descendants of the Chorotega tribes and retain “strong social ties”. In 1978 they also spoke out against the dictatorship of Anastasio Somoza. Today, the locals are gathering food for the protesting youth and the parishes have become food storage centres and hospitals for the injured. Manifestants can be attacked at any time. On Saturday, a 63-year-old man was shot dead as a result of clashes with the police. Several other people were reported injured.

The protests in Nicaragua began on April 18th after the President announced a reform of the social security system. Daniel Ortega said that he was left with no other options, as the National Social Security Institute (INSS) already has a $75 million deficit due to inflation and poor management of funds. The reform was supposed to increase the social security contributions from 19 to 22.5% for entrepreneurs and from 6.25% to 7% for employees. In addition, pensioners would start paying 5% pension tax. Such steps were also recommended by the International Monetary Fund. The reform would still allow people to retire at the age of 60 and after having worked for 15 years or 750 weeks.

“The planned reform was another disappointing blow, especially for young people who do not remember the times of the civil war”, believes Alejandro Medrano, a sociologist. “The economic situation in the country deteriorated with the crisis in Venezuela. Prices started to soar and the country could no longer count on the support of its neighbour. Some people were also disappointed with the president himself”, he said.

Ortega was the leader of the Sandinista National Liberation Front
and led to the toppling of the Anastasio Somosa’s regime. He has been the President for three consecutive terms now, although it is prohibited by the country’s constitution. Similarly, not everyone enjoyed the fact that he was friends with Nicolas Maduro, President of Venezuela. On the other hand, Ortega has always been practical and wary of the position of the United States. Fearing sanctions, this year he stopped exporting products to Venezuela, the country which was in crisis and one of the Nicaragua’s export markets.

Not later than last week, many Nicaraguans hoped that the most serious crisis in the country’s recent history would be resolved by a meeting between the bishops and Daniel Ortega. The talks were to initiate a dialogue with the opposition. The priests proposed the introduction of democratic reforms and holding early presidential elections. After two hours of discussion, the President refused to step down but promised to consider the other proposals. In reaction to this outcome, the demonstrators decided to continue their protests.

“We have received a response in the form of violence. It seems to me that Ortega responded by deeds”, told Bishop Abelardo Mata in an interview with La Prensa daily. “He answered but the answer is not reasonable. The crisis is deepening”, he was quoted saying.

In his opinion, Ortega is not looking for a solution because he “refuses to take responsibility for the paramilitary groups that are protected by the government and the police”. Indeed, Ortega has been silent since last week and, at the same time, the number of victims among the protesters is growing. Most people die of headshots from AK-47 rifles or shots to the neck fired during police or paramilitary interventions. 139 people have been killed so far (most of them are 20- and 30-year-olds).

For this reason, the clergy began to advocate for the victims. Bishop of Managua, Silvio José Báez, in his Sunday homily spoke about the Nicaragua free of “tyrants or victims”. However, the evening masses in the cathedral were cancelled for fear of attacks by the security services whose gun-equipped members drive around the city in trucks.

“The cost is our reputation. Now you have to see how big the losses will be because the situation is evolving”, said Juan Sebastián Chamorro, Director of the Nicaraguan Foundation for Economic Development (Funides), during the first weeks of the protests.

The latest figures may be worrying. The country lost more than $600 million in profit due to the protests. According to Funides, up to 150,000 people may be unemployed in the near future (1/6 of all the people who are formally employed). The sectors most affected are trade, construction and tourism, from which many people have earned their living. The first effects are already visible. Last week, American Airlines stopped its flights to Nicaragua due to strikes.

The photo was taken by Jorge Mejía peralto shows one of the protesters in Managua on April 26th. CC BY 2.0 (https://creativecommons.org/licenses/by/2.0)], via Wikimedia Commons

USA blamed for riots in Nicaragua by Daniel Ortega

Approximately 30 civilians died in street riots in Nicaragua after President Daniel Ortega announced plans for the reform of social security system. The army is monitoring a tense situation in many cities and waiting for people to calm down. President Ortega said USA is responsible for the bloodshed.
Honorata Zapaśnik