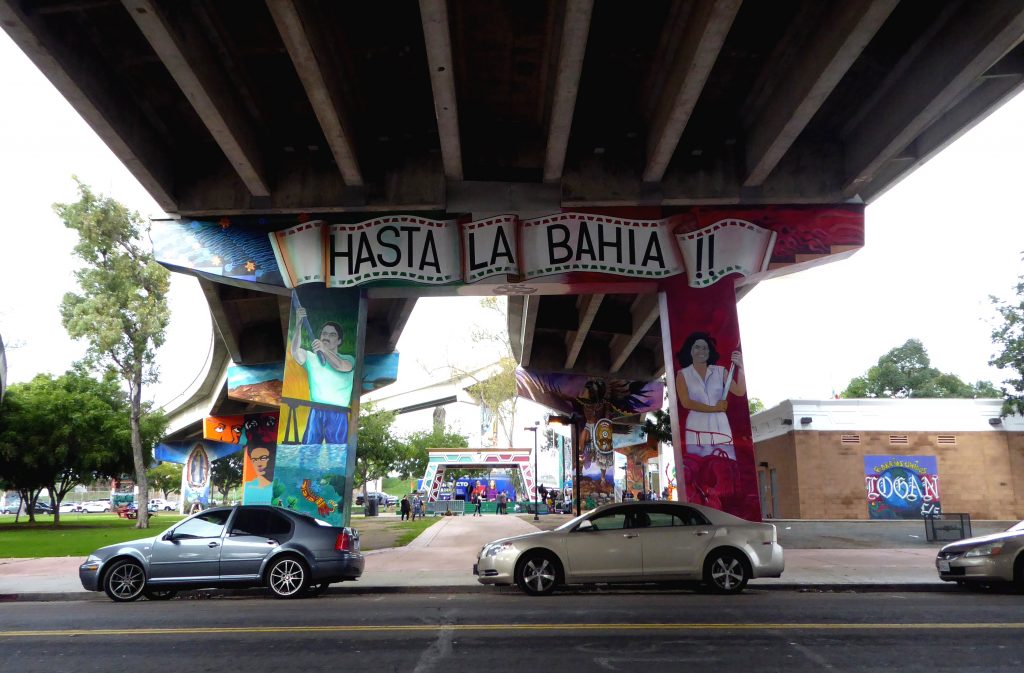 Chicano Park is located under a monumental bridge in Barrio Logan, the Latin district of San Diego. It is pretty empty during the day. No hipsters are walking with caffe latte there or freelancers who are going for a short jogging during their break from work. Chicano Park is known for its colourful murals. It is getting loud in here around 4 pm.

There is a concert because of the 25th anniversary of the Primer Impacto – one of the oldest Spanish-language television news program broadcasted by Univision company. The show is just coming to an end at the stage located in the centre of the park. Manolo is a die-hard fan of the program. He is a 57-year-old Mexican who came here from the city of Del Mar, 35 km away from San Diego. He says that he needs to be in touch with his native culture. Del Mar, a seaside resort, is dominated by wealthy Americans, and there are not too many Mexican neighbours.

– I moved to Del Mar mainly because of children – explains Manolo. – I wanted to send them to a good school, and sometimes it is hard to find a proper school in Latin American districts.  So I had two options: either to pay high tuition fees at a private school or to move to a better place – he says. He could afford to do so: as a manager who has been working for leading American corporations for years, he bought a house in the States, sent three children to study, and plans to buy some land in Mexico. Searching for a perfect location, he traveled all around southern Mexico last year and visited, among others, his hometown in Michoacán.

– My parents moved to the United States when I was six – he says. – Throughout my childhood I had to live in two places. During the school year I was studying in an American school, and during the summer I visited my grandparents in Mexico. My parents did not want me to lose touch with my native culture and language. Unfortunately, after several decades of living in the States, I speak Spanish with an American accent – complains Manolo, who tries not to lose any opportunity to talk in the Chicano Park. Straight after the end of our interview, he starts to talk to a Mexican woman, who sells sweets there. After a few moments, they talk like they have known each other for ages.

A fight for a park

“There is no such friendly atmosphere anywhere else,” says Andrea, a 20-year-old psychology student who is going to do some skateboarding at Chicano Park. She comes here from Chula Vista, 12 km from the the Mexican border.

– At first my parents were against my hobby – says Andrea. – They are traditionalists and they were surprised that a girl might want to skateboard. They often accuse me of being too American. But it’s not my fault that I grew up in the States. I have many American friends, so I speak Spanish only at home – explains the 20-year-old who started to come to Barrio Logan because of her parents. She wants to do skateboarding only in Chicano Park. It became a symbol of struggle for the rights of the Mexican community in the United States.

It all began in the 1960s along with the rapid urban development of the district. At first Barrio Logan was divided by the highway, and then the bridge was built leading to the Coronado peninsula. Concrete pillars replaced  houses and lively shops. The residents wanted to save the former character of the district and demanded from the authorities to create a park under the bridge. In April 1970 there was an escalation of the conflict as it turned out that  a parking lot was to be built instead of the green belt. The residents began a 12-day protest, which eventually led to the building of the park.

Salvador Roberto Torres, one of the originators of creating murals in the park, was also taking part in the negotiations with the representatives of the local administration. The works painted by artists from San Diego, Los Angeles and the Mexican city of Tijuana refer, among others, to pre-Columbian mythology, significant events in the history of Mexico and American migration policy. Murals present Che Guevara, Frida Kahlo, Diego Rivera and César Chávez, who defended the rights of Mexican farm workers working in the United States. His activities were part of the Chicano Movement that was developed since the 1960s, fighting for civil and political rights for Mexican Americans. Activists opposed, among others, the discrimination in universities and police brutality. The name of the movement referred to the pejorative term Chicano, which was used to describe Mexican immigrants living in the United States.

Migration from Mexico to the United States has a very long history. Already at the beginning of the 20th century, Americans began to recruit Mexican workers to work on farms and build railways in the southwestern part of the country. Workers were so badly needed in the early 1920s, that Mexicans were excluded from the migration restrictions introduced by the then President Calvin Coolidge. The next wave of the influx of Mexican workers was caused by the Bracero program that started in 1942. According to American government agency Congressional Research Service, in the years 1942–1964, 4.6 million temporary visas were issued to Mexicans working on farms and in the road construction business. During the peak period, 400,000 Mexicans workers a year were recruited to the United States.

Along with the influx of workers hired as part of the Bracero program, the number of illegal immigrants reaching the United States grew. Starting from 1970, the population of the Mexican population in the United States doubled every decade according to data from the Congressional Research Service. That tendency has not been restrained by the tightening of immigration policy in 1986. Under the law signed by President Ronald Reagan, the control at the Mexican border was more detailed, and higher fines were imposed on employers employing illegal immigrants.

Mexicans are the most numerous group among Spanish-speaking minorities in the United States. According to the data of the United States Census Bureau, nearly 36 million people of Mexican origin lived in the US in 2015. Two-thirds of them are Mexicans who are born in the USA and have American citizenship. The rest – about 11.3 million people – are immigrants. According to the report by the Migration Policy Institute, most of them live in California (37%), Texas (22%) and Illinois (6%). The cities with the most significant number of Mexican residents are Los Angeles, Chicago and Houston. Mexicans who emigrated to the United States over the last decades are usually low–skilled workers doing low–paid jobs. Mexican women tidy up American homes or hotels; they are also babysitters or work in fast food restaurants. Men work on construction sites and in agriculture. They are often gardeners and plumbers.

Immigrants from Mexican towns located close to the Mexican American border are also active in the local labour market in border US cities such as San Diego in California or El Paso in Texas. Many cross the border thanks to the Border Crossing Card, i.e. a permit entitling to short visits for tourism or business purposes. In the case of California and Texas, the card issued for ten years allows the citizens of Mexico to travel in a remote area of up to 40 km from the American border. However, some decide to break the law and go to the US to earn money. They sometimes choose not to commute every day, so they rent a small flat in the US and copped up there. They return to Mexico only for the weekends.

A fight for Dreamers

Mexicans have been the largest group of immigrants reaching the US illegally for many decades. According to 2016 data from the Migration Policy Institute, they account for over half of the 11.3 million illegal immigrants in the United States. They are also number one in the statistics on the DACA program, addressed to the Dreamers – kids who came illegally to the United States. The program protected them against deportation and gave the chance to apply for a work permit. 80% of its beneficiaries were Mexicans. They were outraged when Donald Trump administration announced the end of the program in autumn 2017. Thousands of Dreamers came to the streets of American cities, demanding the restoration of the DACA program. A few months later, the federal judge from San Francisco blocked the decision of the Trump administration and temporarily reinstated protection for 700,000 people. However, immigrants, who at the time of announcing the decision to end the DACA program were not yet its beneficiaries, still live in fear of deportation. Their life is particularly hard in San Diego, where there are many Border Patrols. Even ordinary travel by bus or a walk on the street may result in detention and deportation. Perhaps for some Dreamers, a visit to a place like the Chicano Park will only be a dream.