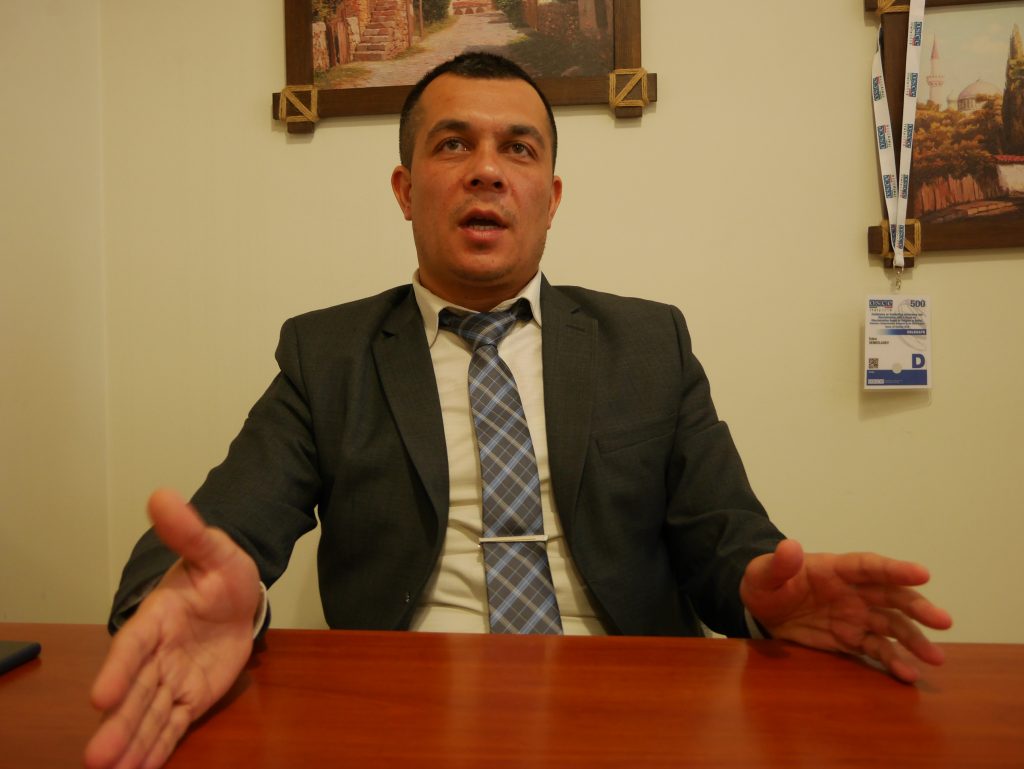 “None of us – lawyers, human rights defenders – deal with extremist activity!”

On December 7, a Crimean Tatar lawyer Emil Kurbedinov was sentenced to five days in jail by a Russian court in Simferopol. He is a well-known human rights defender, who has been active in political trials since the annexation of Crimea by Russia.

On December 6 in Simferopol Emil Kurbedinov was arrested by officers of the so-called Centre E (Centre for Combating Extremism). The lawyer was accused of Article 20 of Code of Administrative Offences of the Russia Federation, which concerns “propaganda or public demonstration of Nazi or other extremist attributes or symbols”.

In case of a detained lawyer, it is all about his 2013 Facebook post on a Hizb ut-Tahrir event in Simferopol. The organization is accused of extremism in Russia and its activities are forbidden. The point is that Crimea was under Ukrainian jurisdiction in 2013, and Hizb ut-Tahrir acts legally in Ukraine. Moreover, in January 2017 Kurbedinov was already sentenced for 10 days for writing the same post but put on the site VKontakte.

Recently, Emil Kurbedinov decided to defend in court Bohdan Nebylytsa, the commander of the “Nikopol” cutter, one of the three Ukrainian naval units attacked on 25 November by Russian warships.

The Outriders talked to Kurbedinov in November 2018 in Simferopol. We talked about court cases in Crimea and those run by Emil.

Piotr Andrusieczko: Recently, the prosecutor handed you in a written warning. What was it related to?

Emil Kurbedinov: The warning I got is a kind of pressure and intimidation, I cannot see any other reason. It says we are warned that we cannot carry out any extremist and terrorist activity, and we are suspected (we, the lawyers) of organising large peace meetings. In October last year, about 100 people went on a one-person picket. A year later we were handed in letters informing that, according to operational data, we were gathering Crimean Tatar activists and organised those pickets. At the same time, we were warned it was a violation of the law, considered as radical activity.

What about those masked men, who get into homes breaking the doors, kidnapping people and torturing them? Why does no one warn them that their behaviour is not acceptable? The more that we saw what happened in Kerch. Eighteen-year-old boy easily bought guns and ammunition, prepared a bomb, quietly entered the university and committed such a terrible act – it’s a real terrorism.

FSB is a gigantic machine. Its agents are everywhere and its curators work in every educational institution. They monitor the Internet and receive information from all Internet providers. They have everything under control, but their forces are directed to a completely different direction – against activists, human rights defenders and lawyers. Why? Because our weapons are just a word, a pen and paper, we do not use anything else. Everyone who was really dangerous has managed to be out of their control.

In March 2017, when we met last time, you spoke about lots of administrative cases against the Crimean Tatars. What is the situation now?

Since March last year, about 150 administrative cases have proceeded concerning peaceful meetings and peaceful activities. Fines and arrests lasting 5, 10, 12 days were usually the judgements. The numbers grow. In October 2017, about 100 people organised a one-person protest in Crimea. Administrative cases proceeded against all of them. Earlier, ten seniors had proceedings initiated. And even before them, there had been an administrative case of Server Karametov, who later died in a car accident. He was an old man who had a poster “Putin, our children are not terrorists”. They arrested him, there was a court hearing, he was fined, and they shut him down for ten days – a sick old man!

In the following months, there was a large number of fines because people were filming searches in the Tatar houses. Furthermore, the Crimean Solidarity has been under constant pressure. It concerns lawyers cooperating with this organisation, activists and human rights defenders. Once there was a meeting of the Crimean Solidarity, they came to give us these warnings. Only this time I was absent, so they gave it to me later.

Is it only about administrative cases?

No, not really. There are criminal cases regarding accusations of terrorism (more than 20 people). There are also cases regarding the kidnapping of Crimean Tatar activists. For example, the kidnapping of Ervin Ibragimov – the truth is there has been no investigation. Until now, there hasn’t been any presentation of suspects, and we haven’t seen any adequate response from the investigating authority.

Is it still common to launch proceedings concerning an article on extremism based on social media posts?

Yes, several criminal proceedings have already been launched, for example against a young girl who published her poems. There is also a new category of crime in our country. It concerns penalising people for not informing investigative authorities about possible extremist and terrorist crimes. The new law was adopted in 2017. The first one to be accused was a man, who didn’t inform authorities that his wife’s brother went to Turkey, and later fought in Syria, at least according to FSB information. The man was supposed to know about these plans and did not report it to the FSB.

Also, in how many cases do you take part as defence counsel?

We have already applied many times to the European Court of Human Rights. However, our applications will probably be considered only after the Ukrainian interstate lawsuit against Russia. Taking under consideration last five years, I remember only one administrative case when the court didn’t find the accused guilty.

How does the Judiciary of Russia look like in the Crimea?

Well, the former Ukrainian judges work here – it is a specific group of people. They try hard to prove themselves while working. In a normally govern state, some of them would have been deprived of their status a long time ago.

Everything that concerns politically motivated cases is connected with the feeling of being caught up in a vortex. Defence evidence is not accepted, testimony in favour of our clients is not taken under proper consideration, the court turns a blind eye, and the decision is made according to the FSB and the prosecutor’s office requests.

Do the Russian state media show these cases?

Each of us is persona non grata in the Russian media. Our opinion doesn’t matter. They only publish official operational video from FSB and information they get from the FSB and the prosecutor’s office. No one asks the lawyers or witnesses.

While working here, do you feel the support of your colleagues from outside the Crimea?

Our Ukrainian colleagues help us, especially while preparing the lawsuits to international institutions. However, we also feel the help and support of Russian colleagues. When I was arrested for ten days in January 2017, over 60 Russian lawyers signed a petition to the Federal Assembly asking to release me. Russian human rights defenders also support us. Memorial (society), for example. We cooperate with them in various fields.

We also try to help other defenders. In September we went to the Krasnodar Krai, where Mikhail Benyash, a lawyer from Sochi, was arrested.

The advocacy is now the only institution that can give a healthy boost to Russian society. It is a part of the system, but not under its full control. I think that sooner or later the Russian authorities, and especially the security service, will want to take control of the advocacy. However, for now, we are a kind of a force, and we can have an influence, to some extent, on the human rights situation, both in the courts and outside them. It is essential. The Benyash case was proof that we can unite and achieve the given goal because the lawyer was finally released.

In 2014 I was alone. It is a terrible feeling. There were two or three of us in Crimea, but only one lawyer, me. Nevertheless, I was ready not only to participate in court cases but also to inform public opinion on this subject. Other Crimean lawyers could participate in the trials, but they never talked to Ukrainian journalists or wrote complaints about the FSB, and so forth. We realised we need to work more widely in these matters, especially taking under consideration the system we live in.

I do not want to offend anyone. Every case is unique and essential. The most important are cases regarding kidnapping people – it is one of the cruellest categories.

Is there any investigative process undertaken for all these over 20 kidnappings?

Some cases have been suspended because the suspects were not found. It was all about making inquiries and receiving papers. Much paperwork was being carried out – dozens of volumes of questions to the morgues and different institutions, questions and answers. For example, they interviewed the owners of all cars of a given brand. And that’s all. Summing up, there is a document somewhere in these volumes stating: we end the investigation since it is impossible to identify the perpetrators.

Exceptional are only cases of those accused of terrorist activity. Not only that some are charged with terrorism, but they are also accused of trying to overthrow the constitutional order in Russia with the use of force. It is entirely out of the blue – Crimean Tatars, Muslims who lived here, accused of willing to attempt a coup d’état in Russia. It’s a case of surrealism.

The article was written thanks to the support of the Foundation for Polish-German Cooperation.