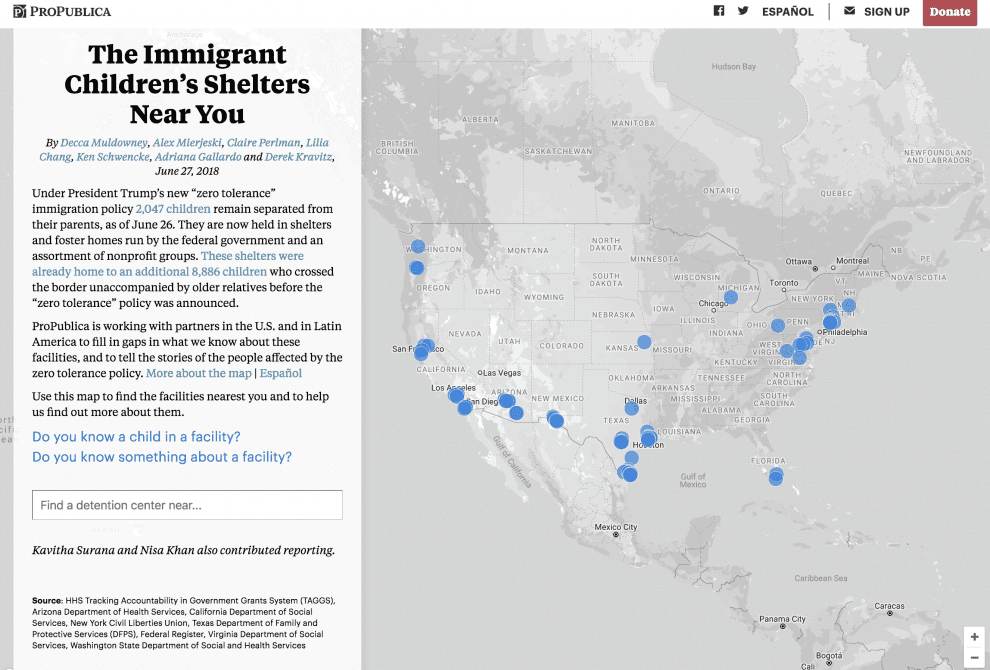 When the government has thousands of noncitizen children somewhere in its custody, how do you find them? You report on it — together.

Eight — make that nine — news organizations are working together across four countries, trying to determine where these children have been taken and, exactly, how many there are. “Help us make sure that every single child is accounted for,” The Intercept’s explanation of the project to readers says.

ProPublica, BuzzFeed News, Univision News, The Intercept, Frontline, the Texas Tribune, Animal Político (in Mexico), El Faro (in El Salvador), and Plaza Pública (in Guatemala) are involved in the major initiative. They’re seeking information from their readers on the facilities where these children are housed — with check boxes for “I was held there,” “I worked or currently work here,” and more — and who the children are — “What is the child or children’s name (s)? What age(s)?” — in forms available in English, Spanish, and Portuguese.

This particular project began with ProPublica publishing a map of all known facilities housing immigrant children — children separated from their parents at the border, and minors who crossed the bordered unaccompanied — to help readers understand their actual proximity to the issue and to hold accountable the government agencies that are involved.

“It was one of those quintessential ProPublica moments. We came together [a week ago] and said, ‘Okay, we’re going to refocus what we’re doing and continue to chase this story of zero tolerance,’” said Adriana Gallardo, engagement reporter at ProPublica.

This is the most quickly that ProPublica has spun up a major collaborative project like this; while the organization has done international collaborations before, this is also the first time it’s embedded a map and engagement questionnaires simultaneously in multiple countries.

Gallardo said ProPublica is maintaining the data and sharing relevant tips with the partners, who are free to pursue stories at their will and are committed to sharing the map and the forms with their audiences. A dozen people from the ProPublica newsroom, among the news apps, research, and engagement teams, are focusing on this project. “As we get more tips, there will be more reporters involved to produce journalism from this, which is the ultimate goal,” Gallardo said.

News organizations have been covering the crisis, which has echoes in the Obama administration and has worsened and gained public attention since the Trump administration began separating children from their parents at the border. ProPublica’s obtained recording of crying young children in one of the shelters drew even more attention. The Texas Tribune added 78 tweets over nine days to its thread tracking the situation started the afternoon of that same day. With that has come critiques of the media coverage, from Time magazine’s cover photo of Trump and the Honduran girl (who wasn’t actually separated from her mother) to the diversity of weekend political talk show guests — leaving out the voices of the people actually involved. Meanwhile, a Facebook fundraiser to raise money to help separated immigrant families went viral and has now surpassed $20 million (from an original $1,500 goal).

Now, these news organizations are digging in to do something more about it.

We did it to:
-show readers where these facilities are
-increase transparency & accountability
-ask for more tips about themhttps://t.co/vSZw1jtoE1

Gallardo said that most of the tips coming in so far (in the one day that the forms and the map have been live) are related to the facilities rather than the children themselves, but she’s optimistic the international collaborators and other partners will help spread the word. “This is the beginning of the reporting on this for our newsroom,” she said. “We are being transparent about what we know and what we don’t know and what we need help with.”

“Our readers are very enthusiastic about the possibility of helping spread the reach of the map, particularly because our government’s reaction to the crisis has been very shy, clumsy and yielding toward the U.S. government,” said Enrique Naveda, the editor at Plaza Pública, which has partnered before with international coalitions like ICIJ. “Our highest expectation regarding this alliance is to offer a service to migrants above all, and secondly, to have a direct political impact that gives way to more humane policy in the U.S. and Central America.”

ProPublica spearheaded another major collaborative project during 2016’s Election Day, called Electionland, though they obviously had more time to prepare for that newsy situation. Then, 450 journalists from about 250 news outlets in 47 states (and the District of Columbia) monitored voting aberrations, but they had months to prepare for it. ProPublica is also working on Documenting Hate, a nationwide effort to track hate crimes, with partners like Univision, the New York Times’ opinion section, Meedan, PBS NewsHour, and many more, including local outlets.

At Poynter, David Beard pointed out that other news orgs like the Texas Tribune and the Washington Post are trying to crowdsource information on the issue, too, as well as a group of researchers using library science.

We are partnering with other news organizations, including @propublica, @BuzzFeedNews, and @univisionnews, to gather vital information about the children in immigration detention facilities and shelters. Help us find them. https://t.co/Bp0a1kZ1jK

Do you know a family separated at the border? We’re looking for information about the children held by the US government https://t.co/ZYhDqkjudP

FRONTLINE is investigating family separations at the U.S. border – and you can help. https://t.co/SbFDyav7uI pic.twitter.com/uYEr7oY8j2

If you have direct knowledge about a separated immigrant family or a facility where children are being held, we want to hear from you.

Information can be submitted anonymously or with names. It will not be made public without permission. More here: https://t.co/supAYPFc3R