The mass protests of 2020 in Belarus showed the whole world, as well as the Belarusians themselves, how many people disagree with the political regime and are ready to resist it. These protests played an essential role in uniting the Belarusians, taking a big step from an atomized, divided society to an integrated civil society.

One of the most notable cases of political self-organization occurred in mid-August in the form of a volunteer camp near the prison on Akrestsina. Thousands of detainees were held there in inhuman conditions and subjected to state violence in the first days of the protests. In a few days, a real field camp of people utterly unfamiliar to each other was set up in the park opposite the prison: doctors, psychologists, drivers, priests, human rights activists, lawyers, technicians took part in it. It existed for about a week (August 11-18), when there was a maximum flow of people going free and waiting for their relatives.

The level of solidarity and self-organization of people in critical situations is surprising. Spontaneous Telegram channels, where help could be found, grow to several thousand subscribers in a matter of hours, whether it is bringing water to de-energized protest areas or ordering pizza for the round-the-clock guards at the memorial of the murdered Raman Bandarenka in the Square of Change.

The absence of leaders has become one of the key and unexpected features of the protest. It led to its decentralization and transformation from mass marches in the city centre to daily neighbourhood activities. On warm evenings in all Minsk districts, yard cultural and entertainment events were held: concerts, movie screenings, children's parties, educational lectures, and excursions. For the first time, these non-political activities made it possible for residents to get to know each other and build horizontal ties with their neighbours from courtyards and districts. The urban environment also began to change: national flags in the windows, protest graffiti and murals, white-red-white ribbons hanging on the trees and lampposts appeared.

In November 2020, the large-scale Sunday rallies completely switched to the format of district protests, transferring the mechanics of organizing marches to local district groups. Now the routes and tactics are determined by the district's residents themselves. It made it very difficult for the security forces to suppress the protest. Instead of several familiar locations in the city centre, they have to travel to dozens of districts, often unfamiliar to them. The protest became flickering and liquid: after dispersal in one place, it immediately appeared in another. 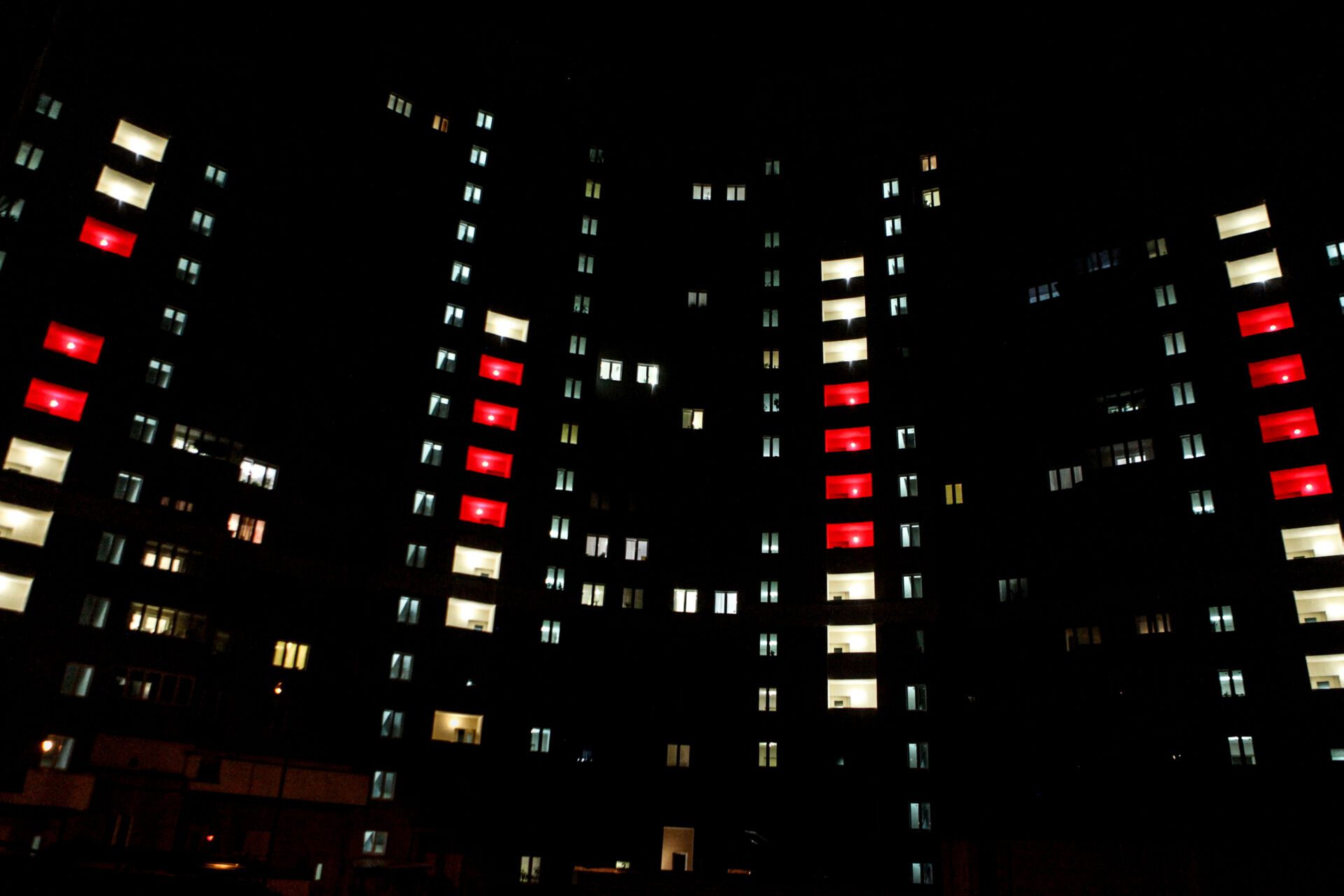 A building with illumination in colours of the national flag that becomes a symbol of a protest. Many buildings were decorated by people that way which annoyed local authorities.
Minsk, September 5, 2020 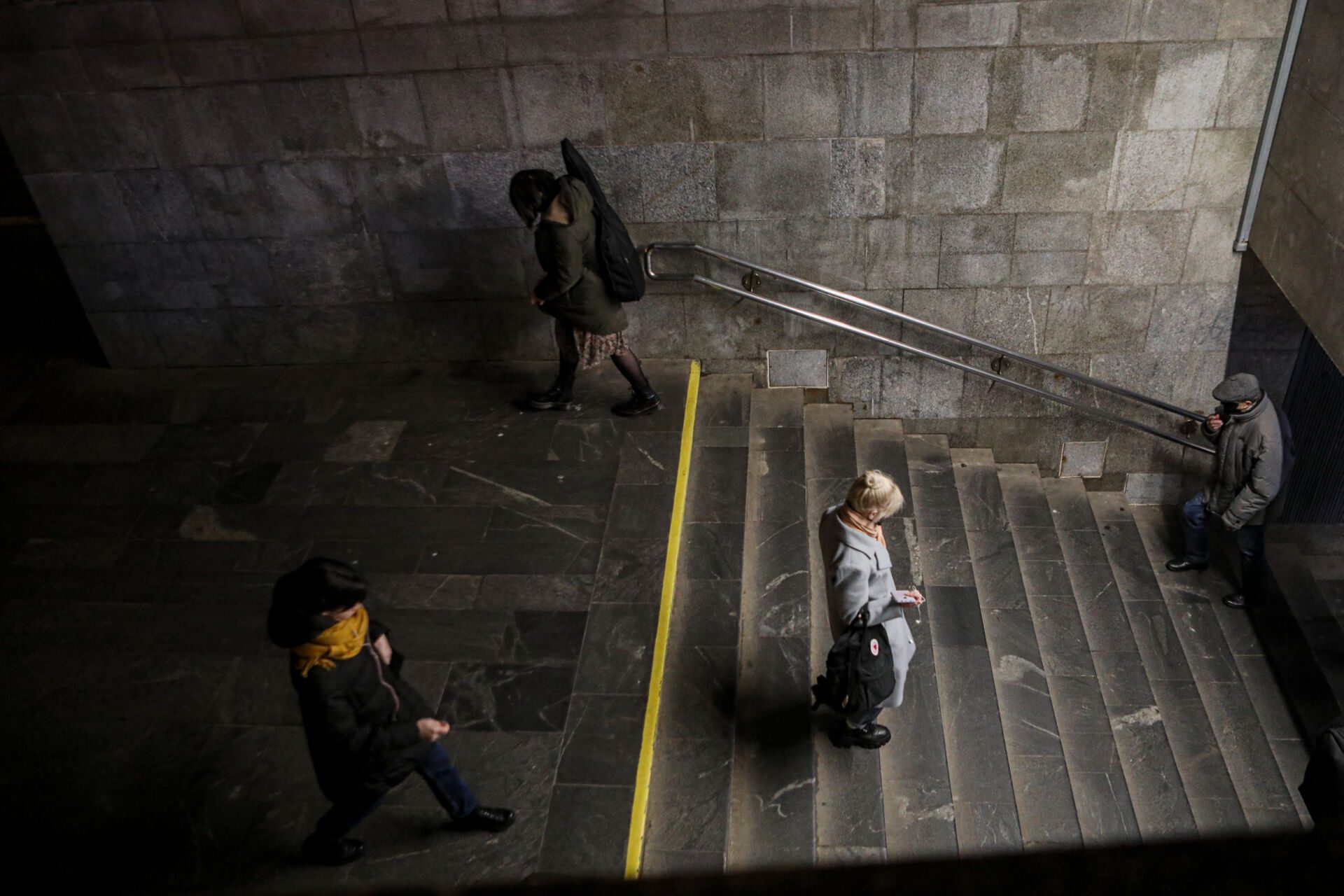 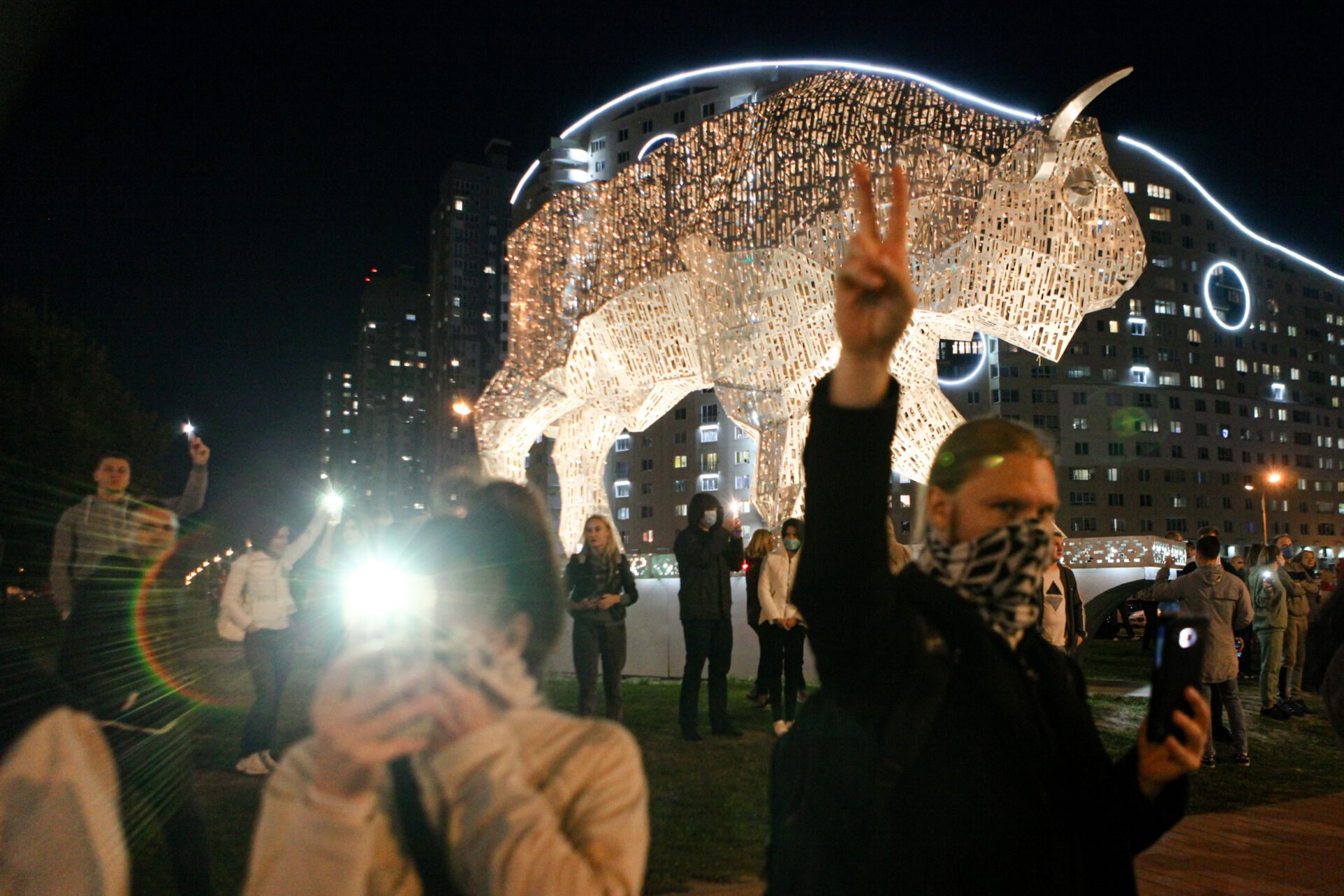 One of the forms of protest –‌ "solidarity chains" –‌ when people are staying along the roads with national flags and posters. The chains were appearing in random places all over the city and are temporary. This tactic helps to avoid arrests and keep protests on the streets.
September 23, 2020. Minsk, Belarus. 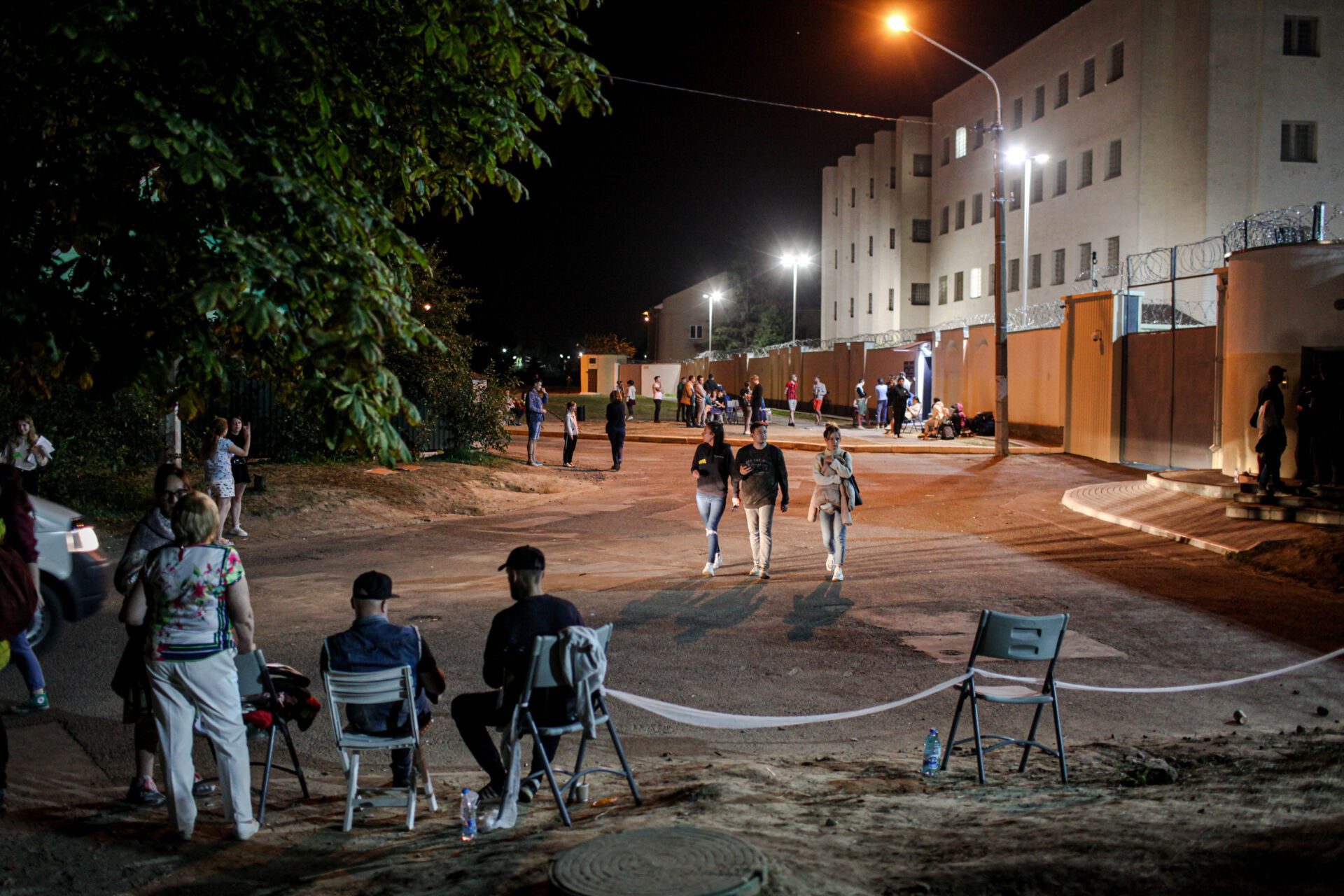 Volunteers near Okrestina prison kept watching even in the night.
August 15, 2020. Minsk, Belarus. 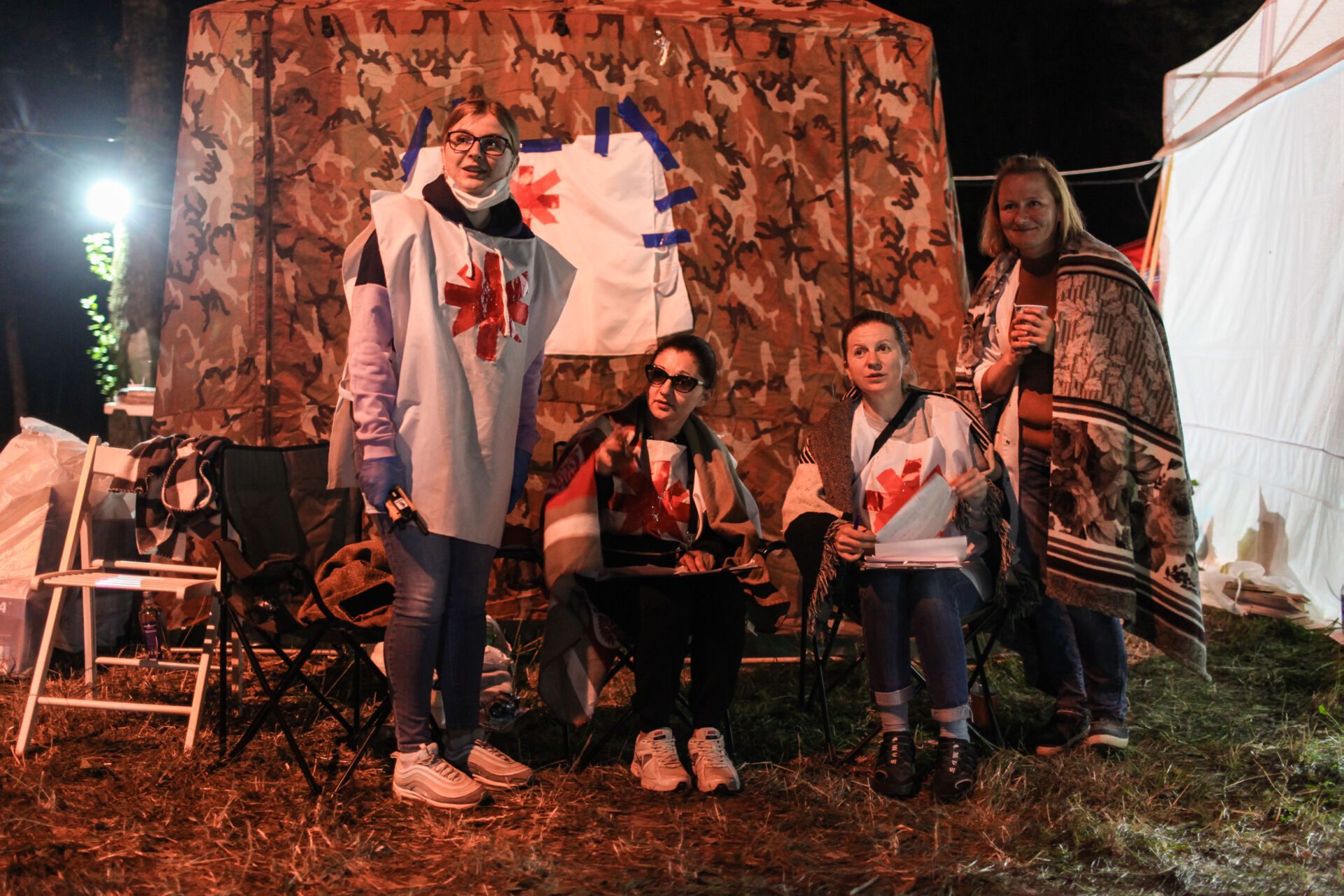 During August 11-20 near Okrestina prison arose a self-organized volunteer camp. It aimed to provide psychological, medical and logistic help for released victims and their relatives. On October 5 the prison authorities asked the volunteers to limit the operation of the camp, 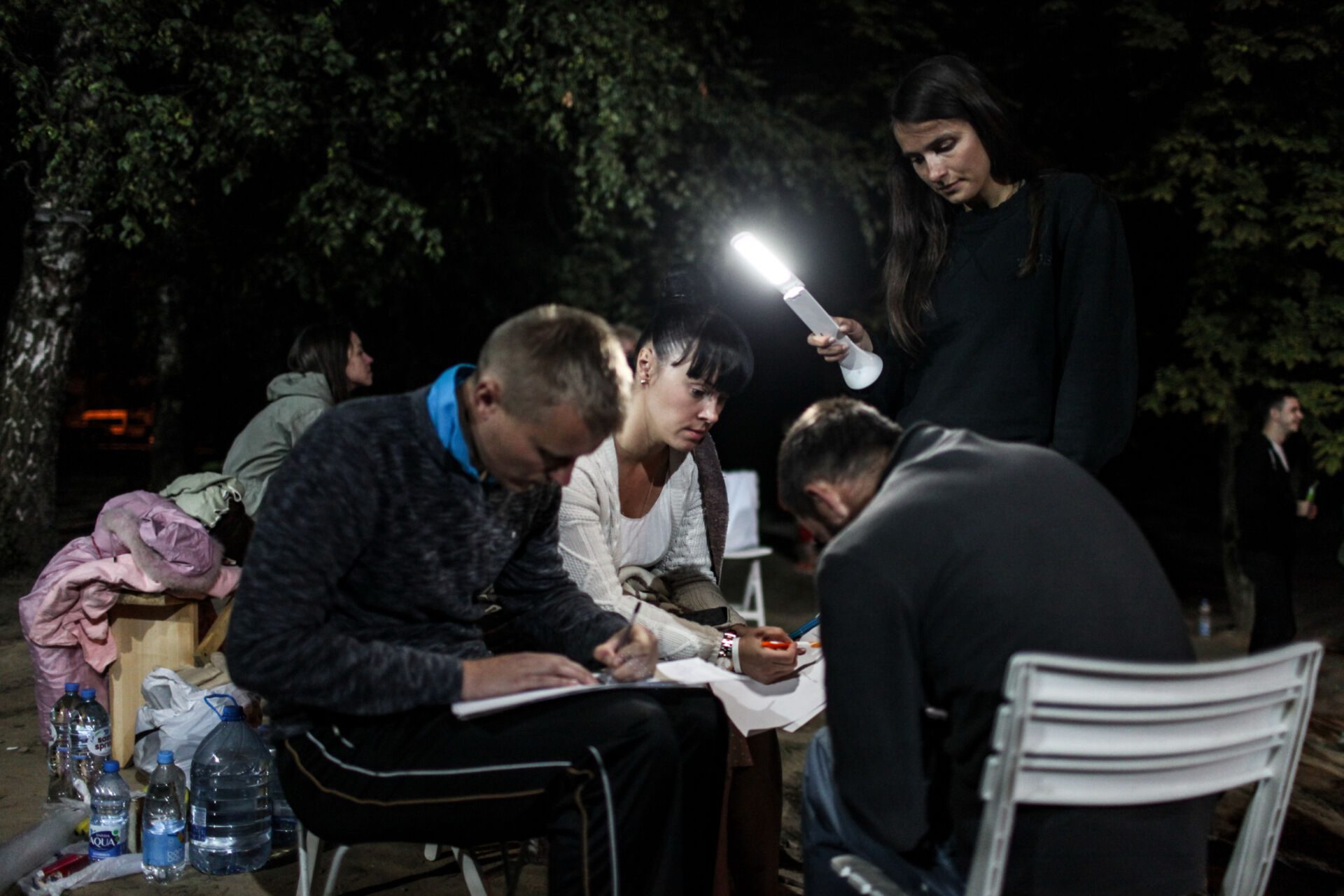 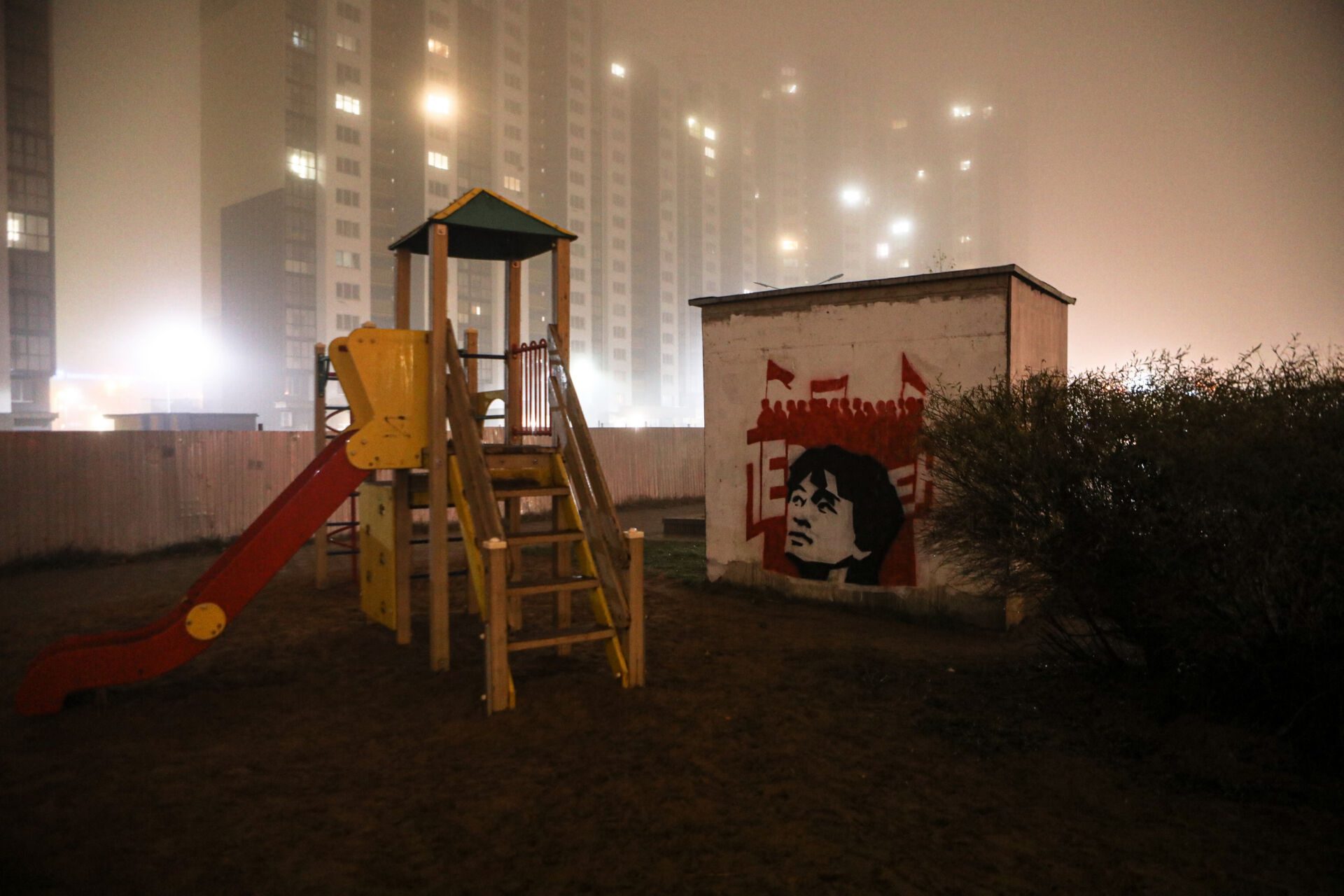 A mural in one of the Minsk courtyards. It depicts a legendary Soviet musician Viktor Tsoi, an author of the famous song "We demand changes!", which became one of the main songs of the Belarusian protest in 2020.
November 18, 2020. Minsk, Belarus. 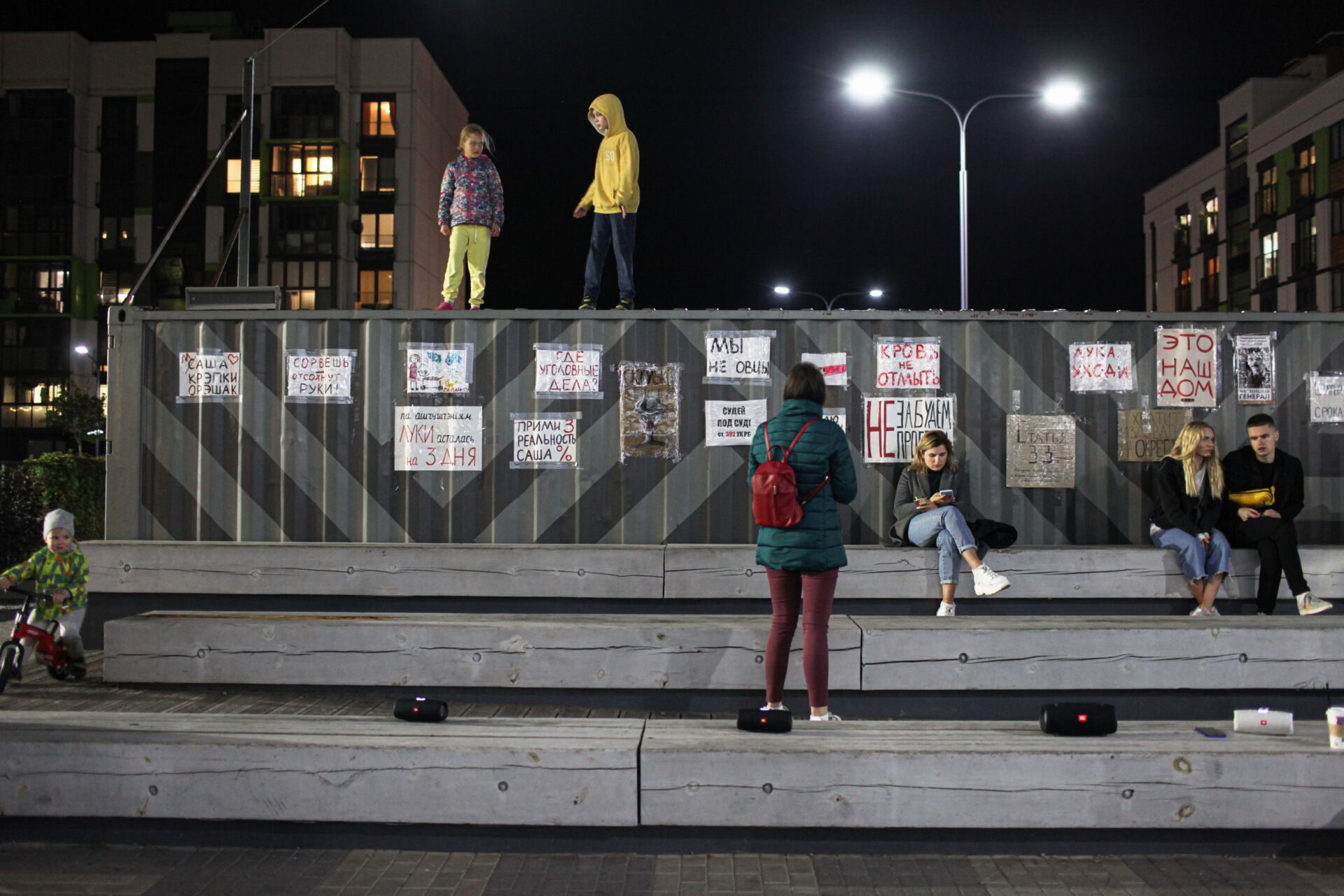 Some posters that were used on passed marches are stuck to the containers at Novaya Borovaya district.
September 10, 2020. Minsk, Belarus. 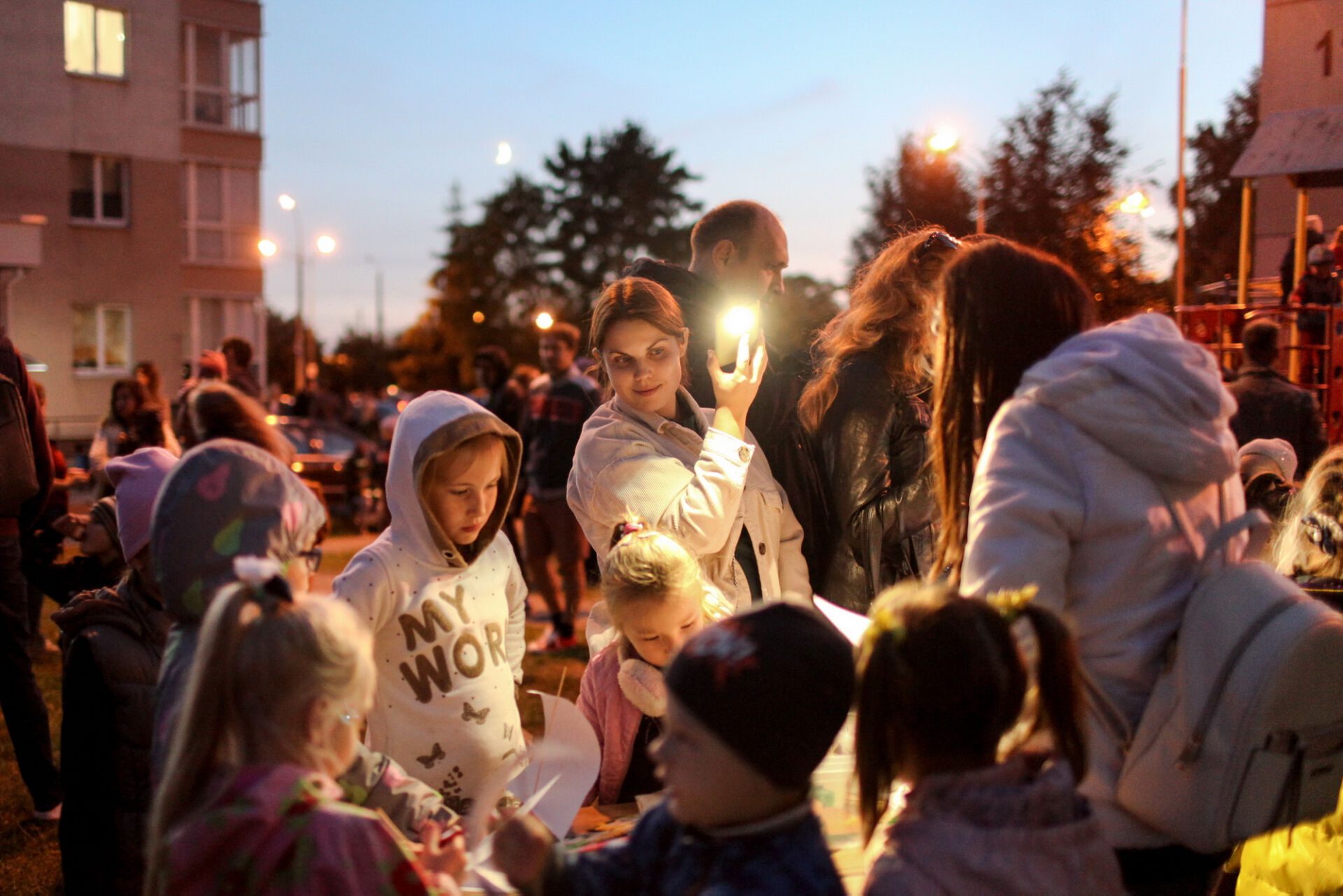 In autumn 2020 local Telegram-chats were created and became an important communication tool for people. Local communities started organizing themselves. In the photo, there is a handmade workshop for children in the yard on the outskirts of Minsk.
September 21, 2020. Minsk, Belarus. 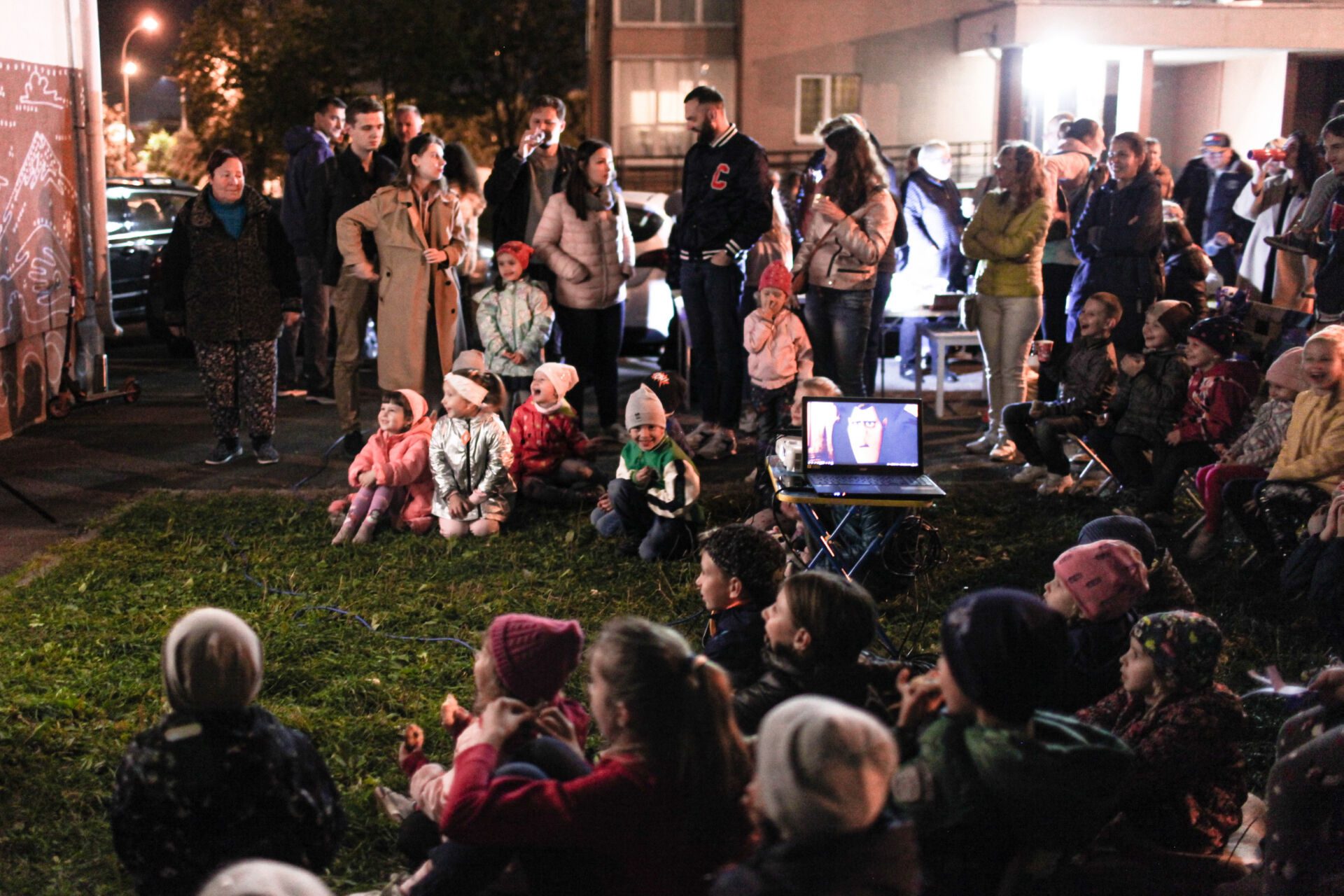 In all districts, local people started organizing educational lectures, musical concerts and watching movies together. In the photo, the children are watching cartoons. September 21, 2020. Minsk, Belarus. 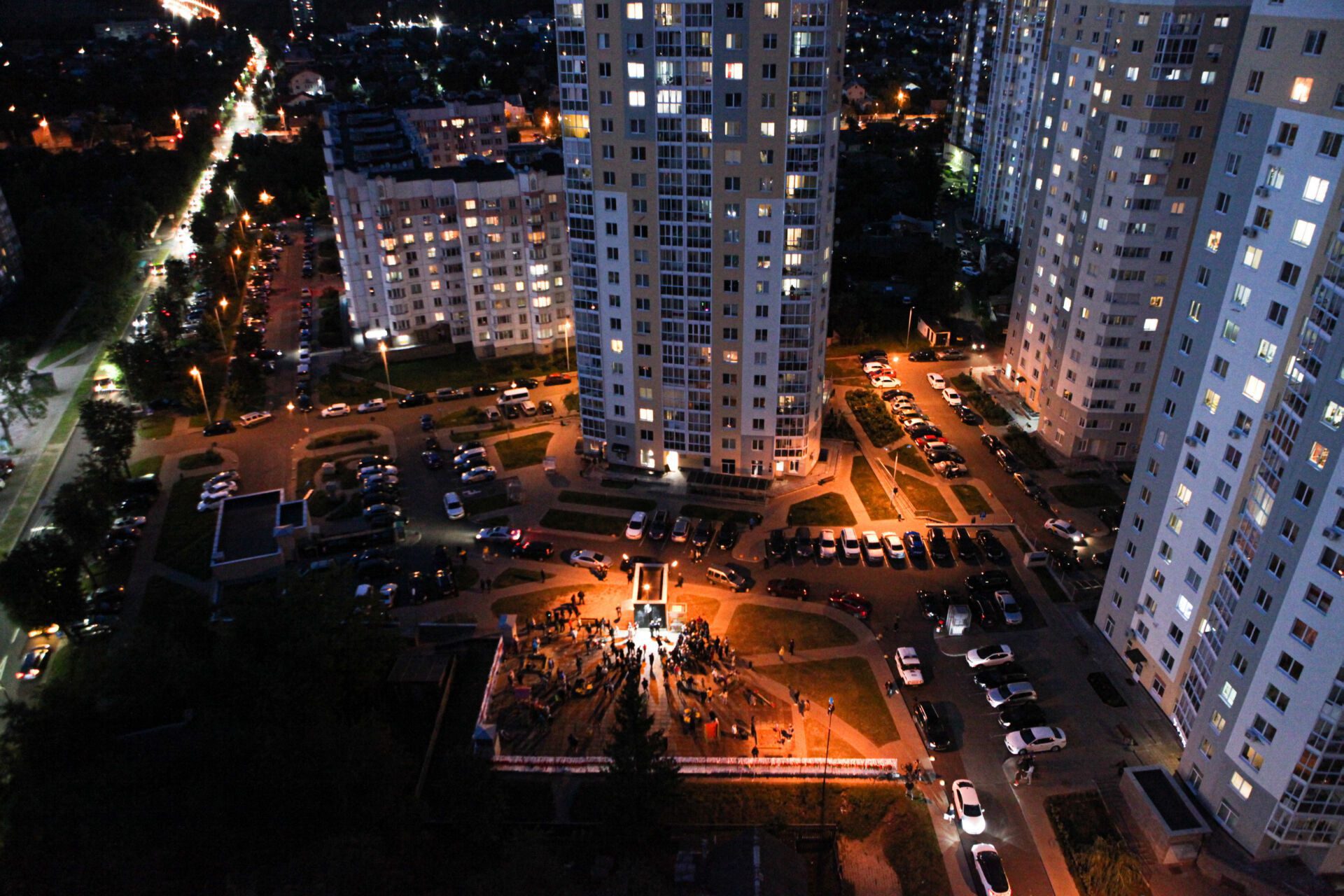 Square of Changes –‌ a famous protest yard that became one of the centres of local cultural and civic activities. Establishing local communities boosted local protest activities as well. People started attending protests with their neighbours and got involved in other political activities.
September 10, 2020. Minsk, Belarus. 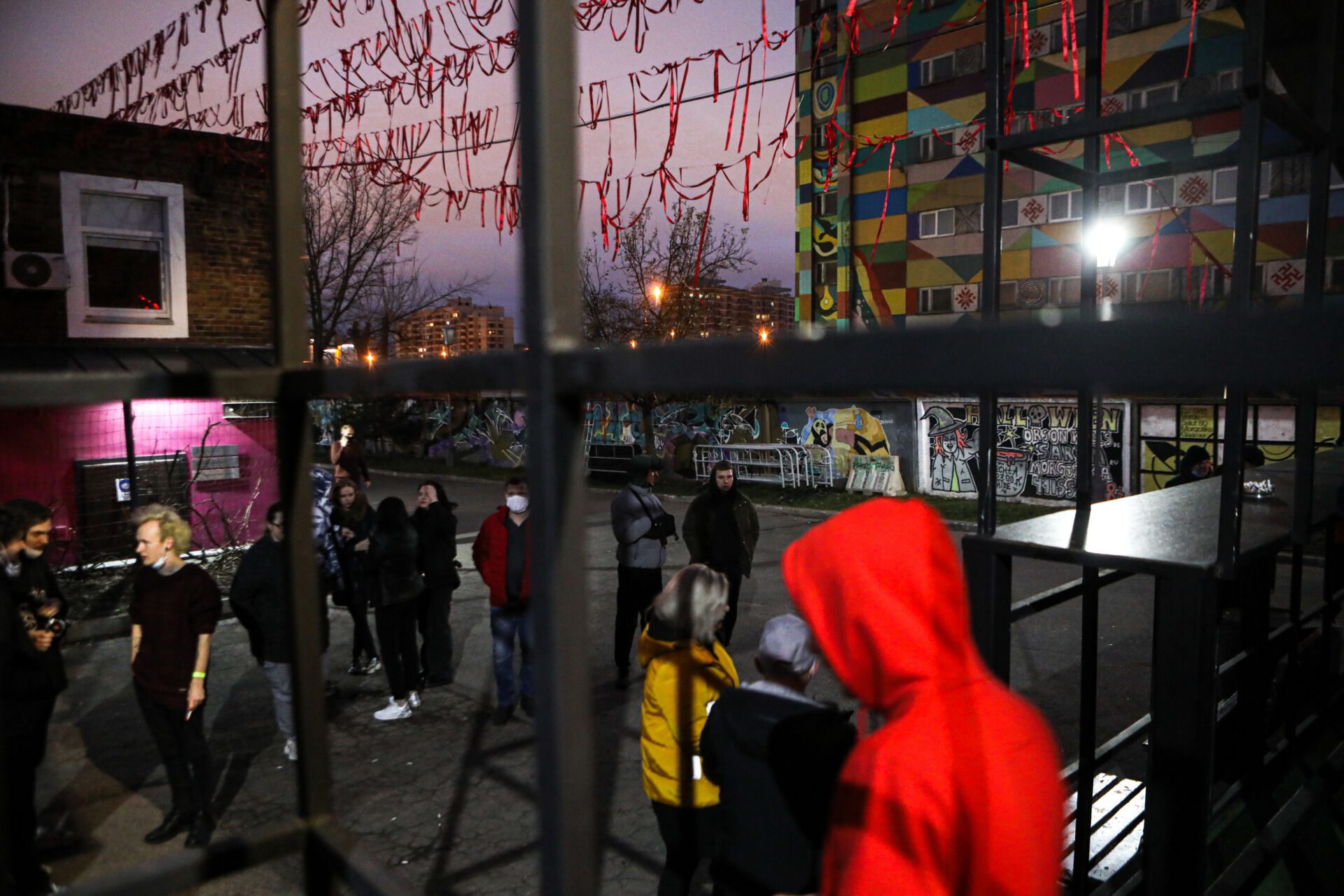 Some young people hang out in front of the popular local concert club. Despite the spread of COVID-19 Belarusian authorities undervalued danger and were ignoring any protective measures until winter 2020. Real statistics of infected and victims is unavailable.
November 21, 2020. Minsk, Belarus. 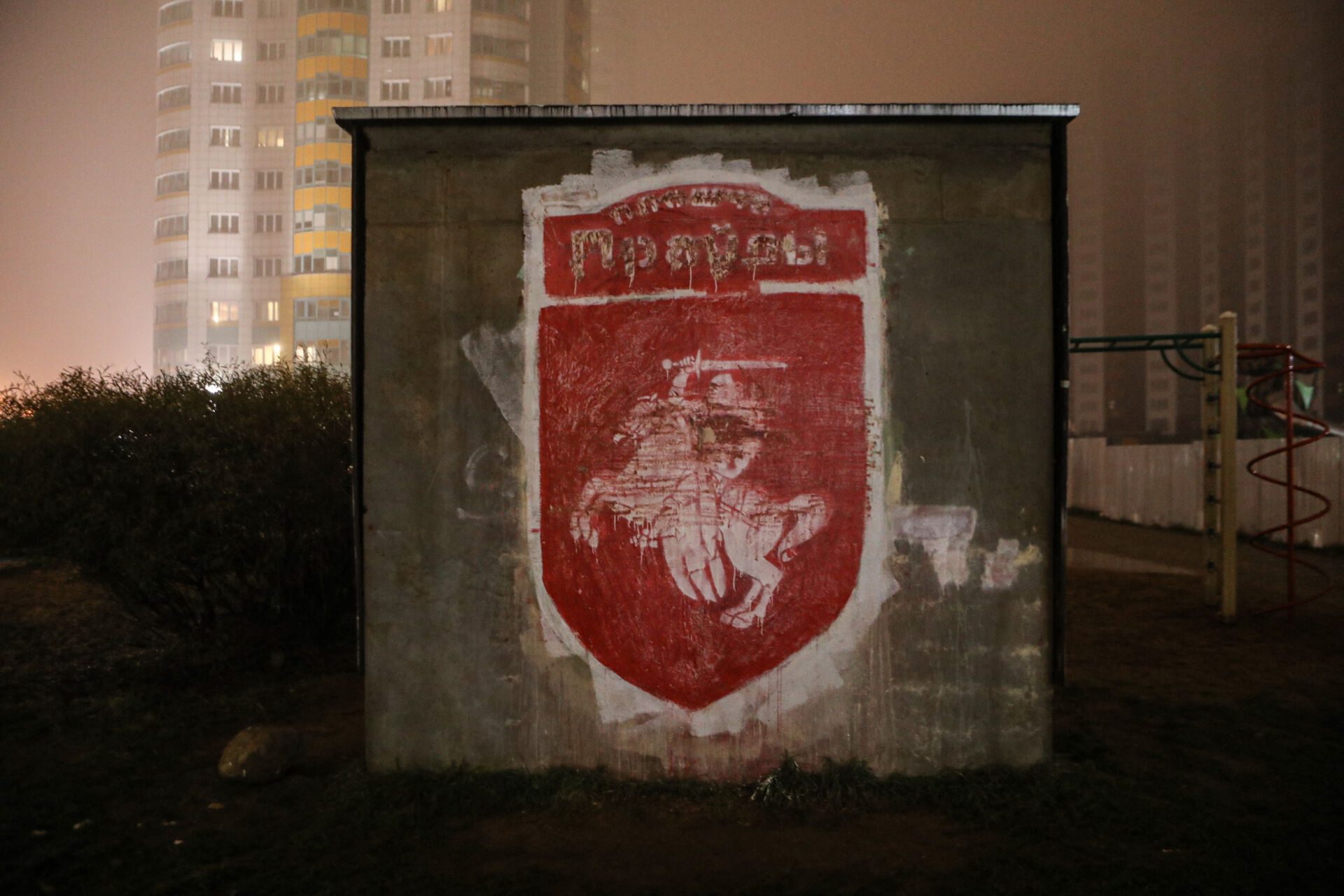 A mural with a national (non-recognized by state) emblem at "Plaza of Truth", one of many protest yards at Malinovka district. Later it was destroyed by the local authorities.
November 18, 2020. Minsk, Belarus. 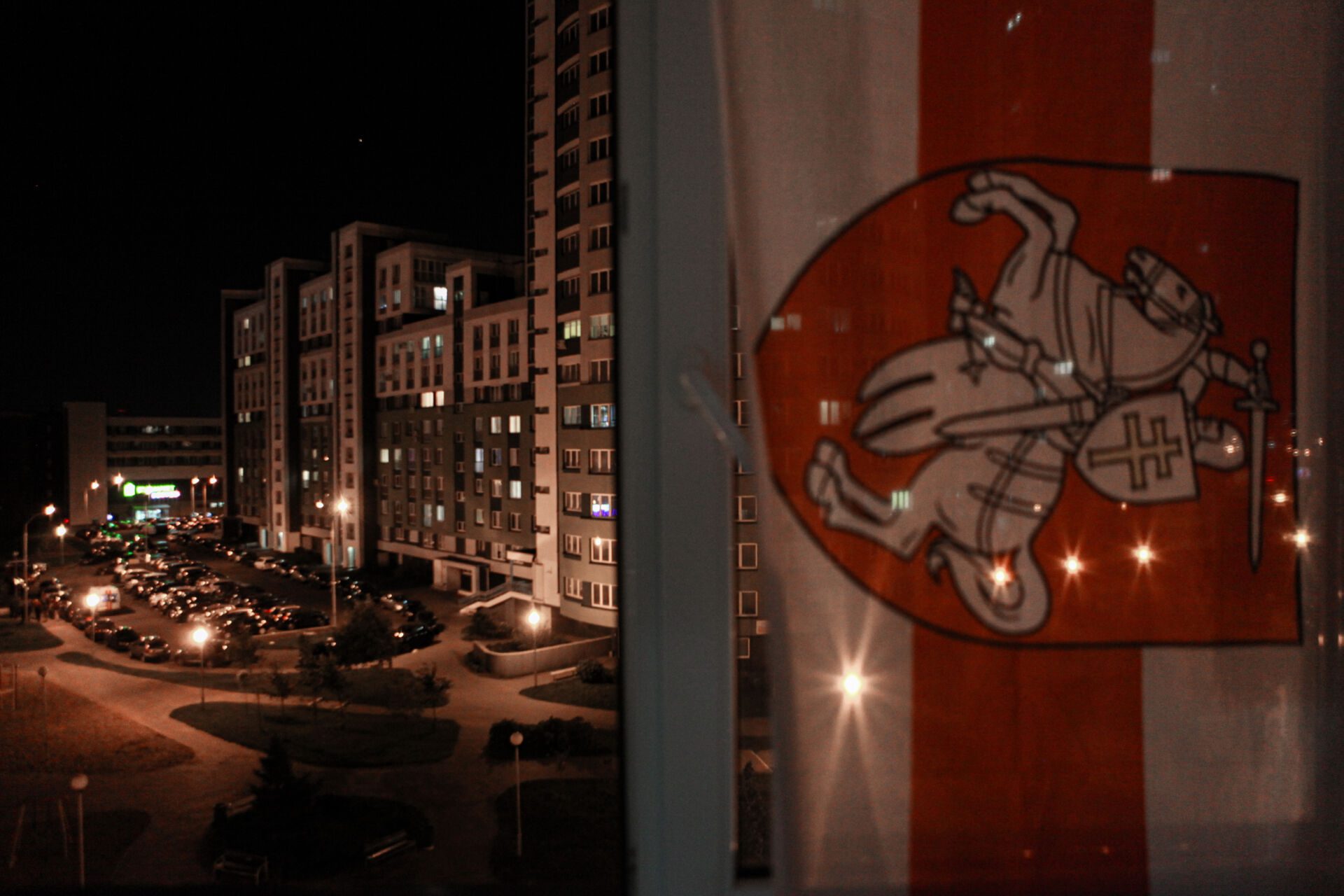 A national flag in the "Kaskad'' district. The authorities are trying to fight with flags in the public area, but they still lose this fight as this phenomena became massive. In December 2020 the law enforcement started arresting people right in their homes if a national flag was noticed on the balcony.
September 10, 2020. Minsk, Belarus. 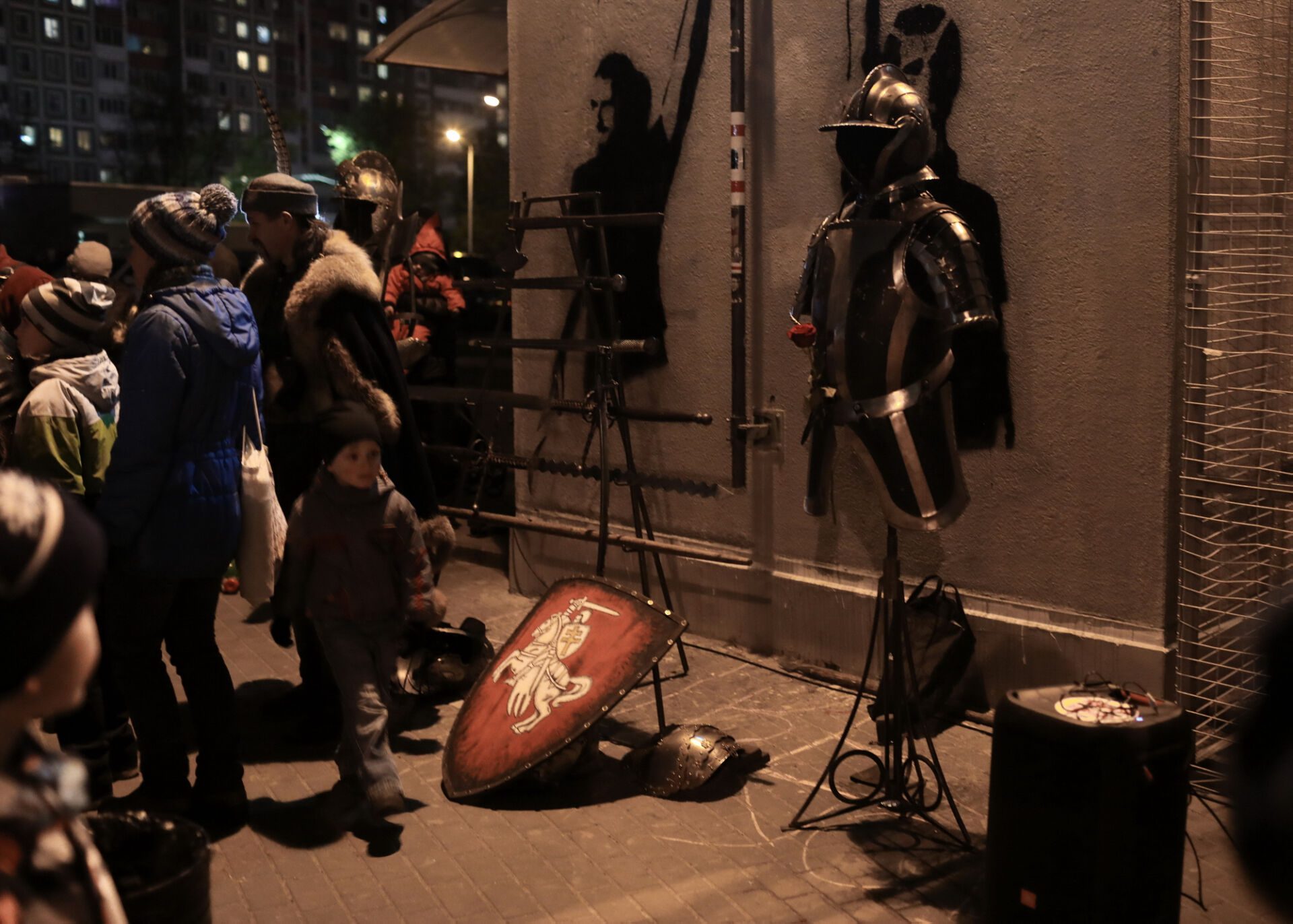 A mural of two DJ's at the Square of Changes who turned on a famous protest song at a pro-state meeting in summer 2020. Square of Changes is a yard where local citizens organize cultural and protest events.
Minsk, Belarus. October 17, 2020. 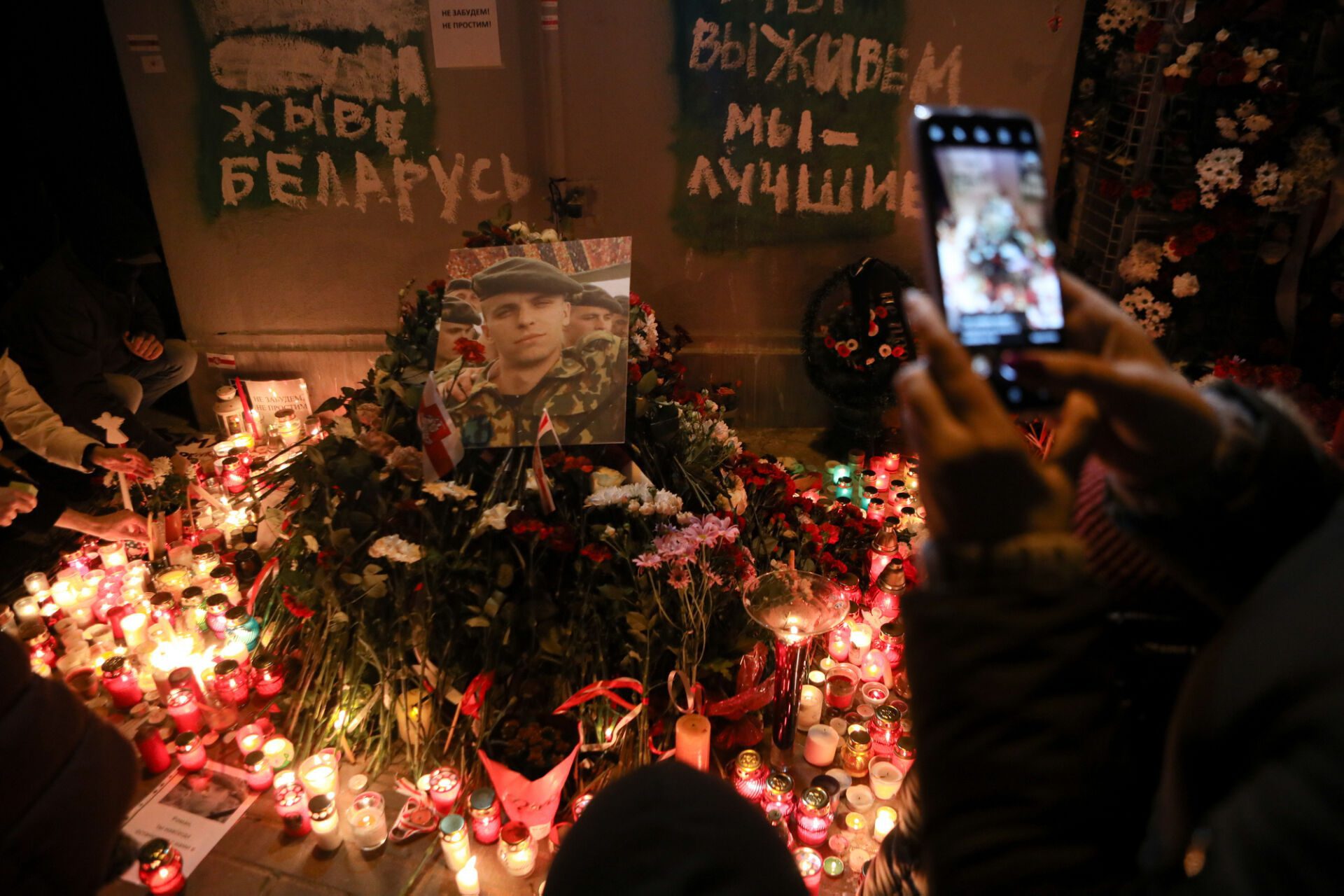 Some flowers, which were left in the place, where Raman Bandarenka was beaten. He was killed either by pro-state supporters or by police. The memorial was demolished by authorities three days later.
November 12, 2020. Minsk, Belarus. 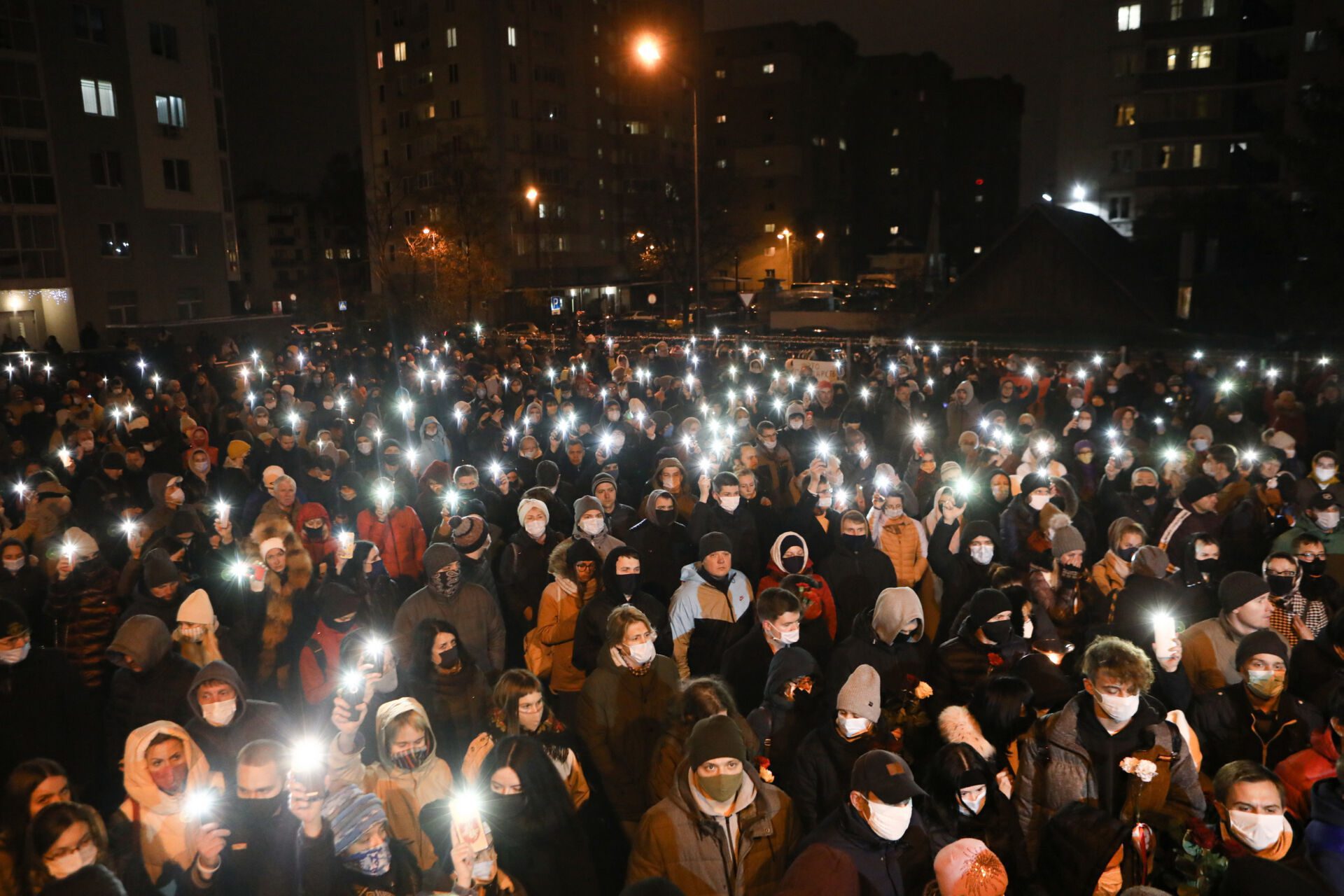 Few thousand people gathered at the place of Raman Bandarenka’s killing just a few hours after the tragic news came out. Raman was killed either by pro-state militants or by police.
November 12, 2020. Minsk, Belarus. 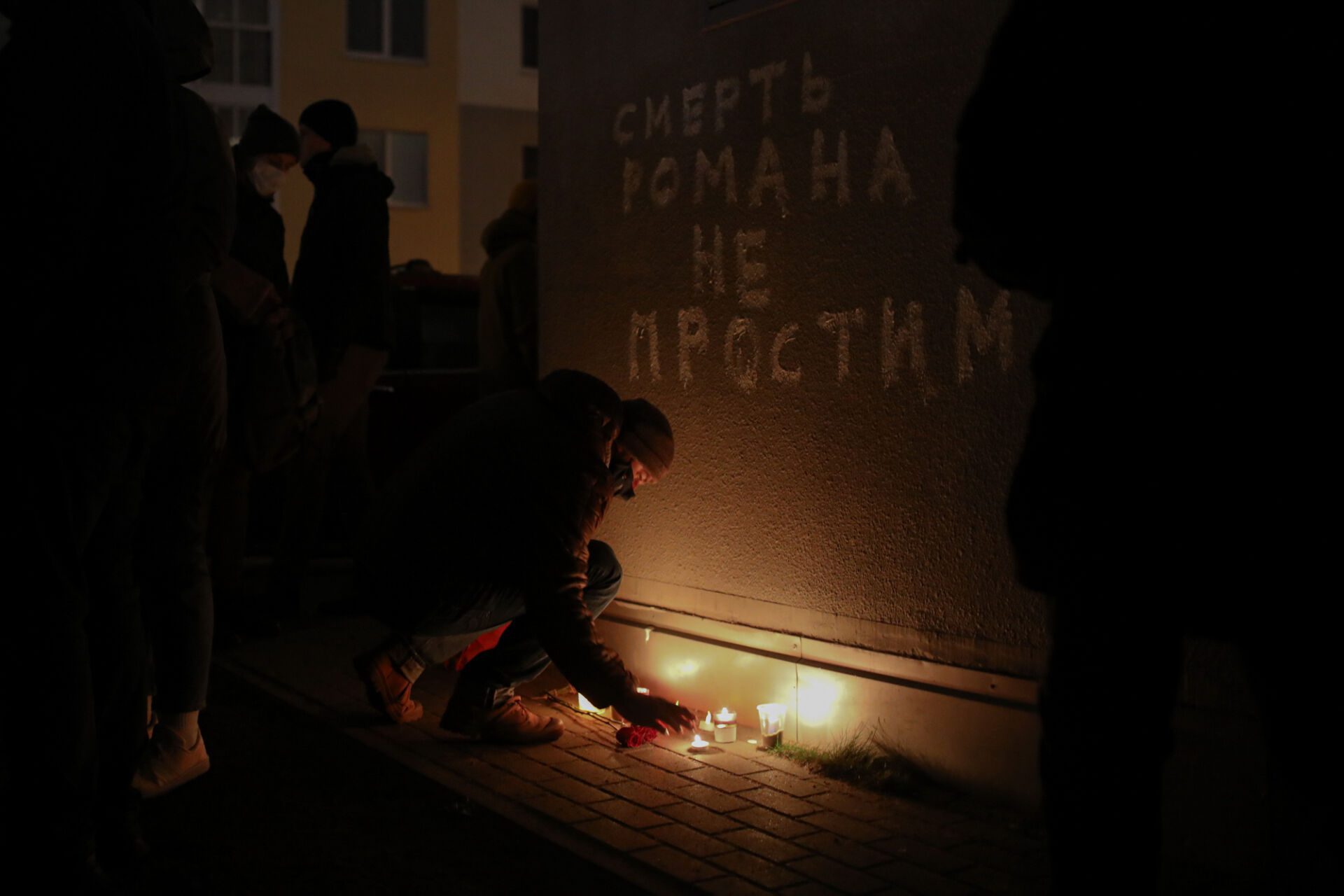 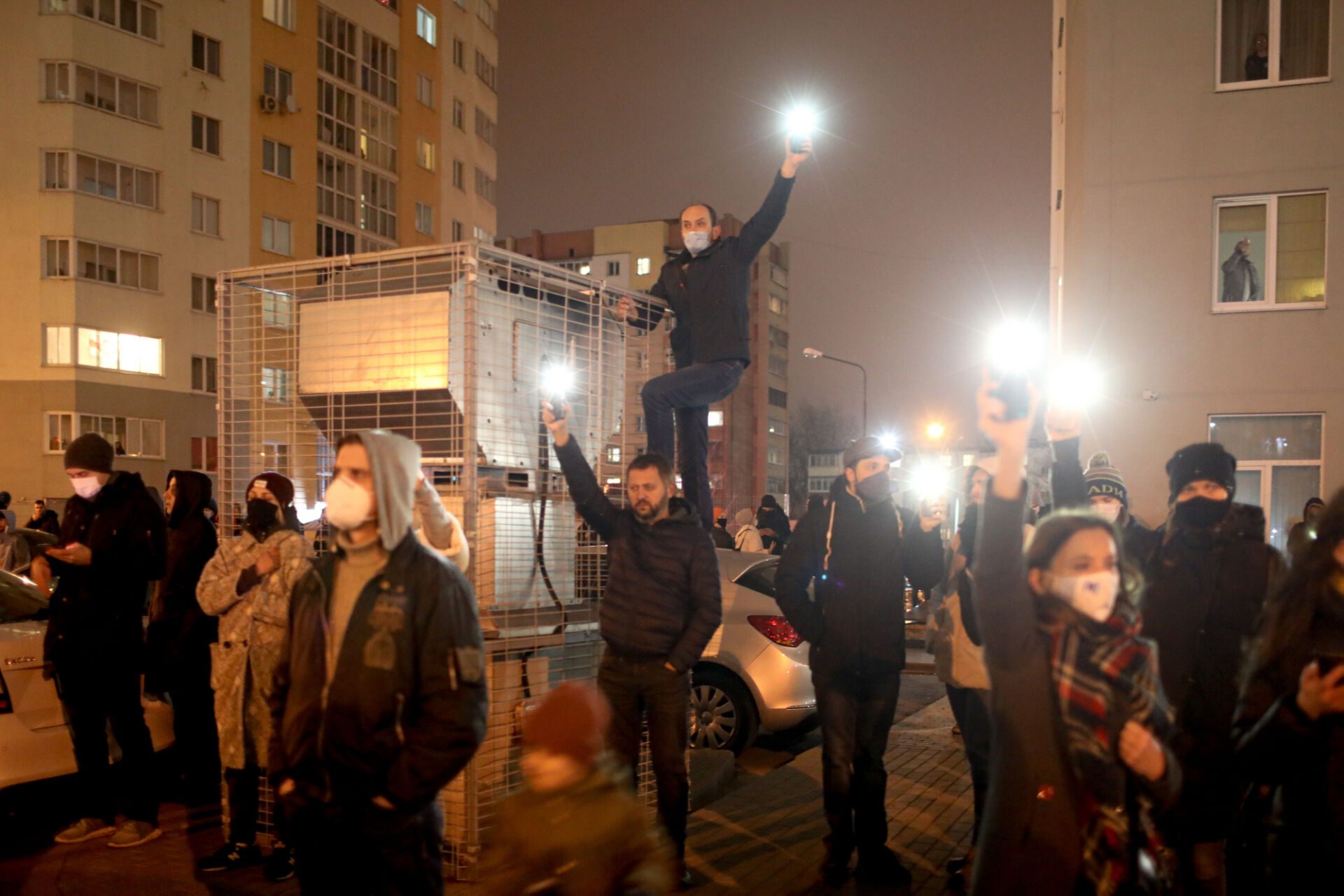 People gathered at the place of Raman Bandarenka’s killing. A 24-hours duty to protect the memorial from destruction was organized at the yard for three nights in a row after the tragic events. The memorial was destroyed on a Sunday march protest with the support of riot police and massive arrest of 300 memorial defenders.
November 12, 2020. Minsk, Belarus. 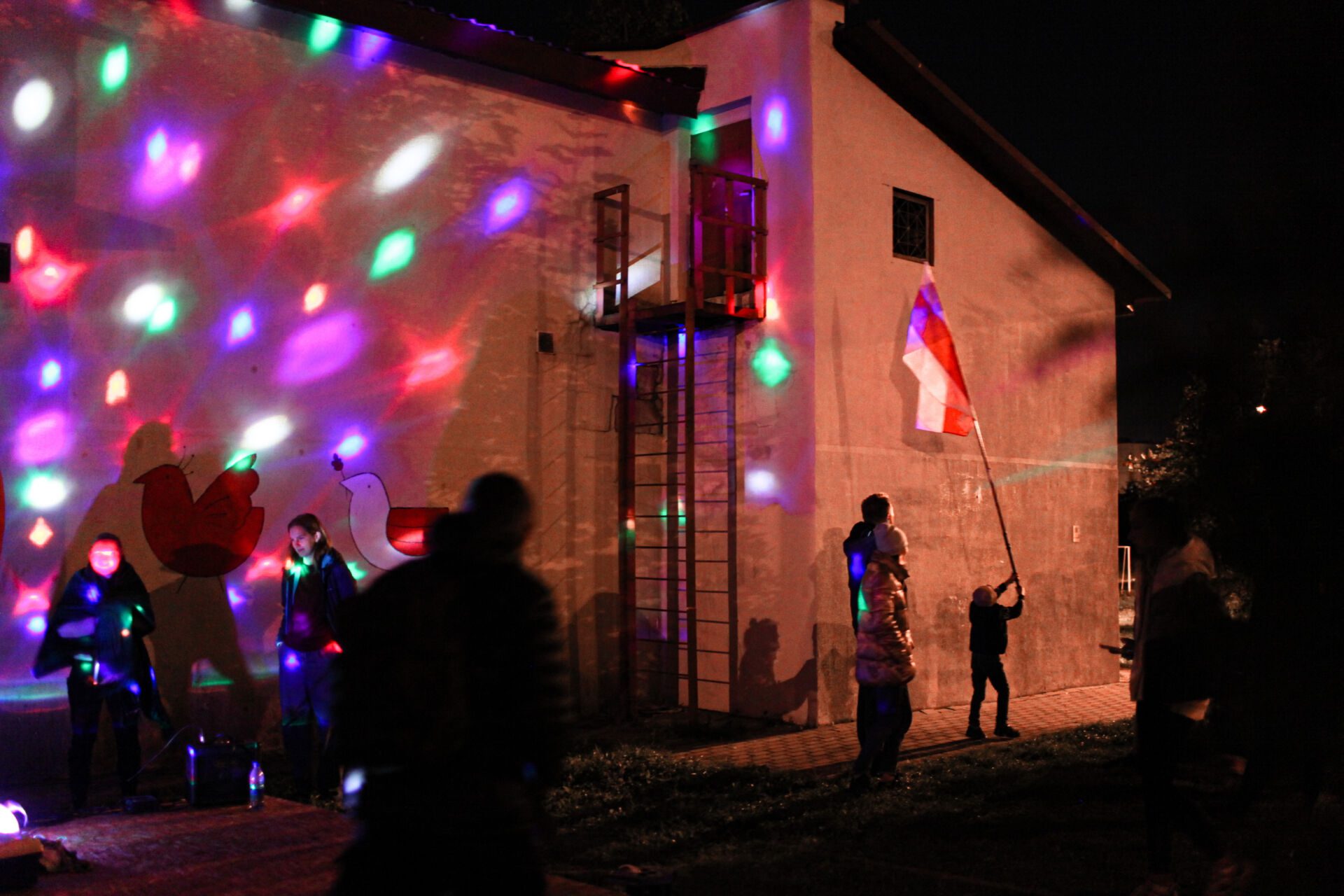 After the concert in the yard at the outskirts of Minsk. The reaction of authorities on such concerts was arresting the musicians who supported such initiatives.
September 18, 2020. Minsk, Belarus. 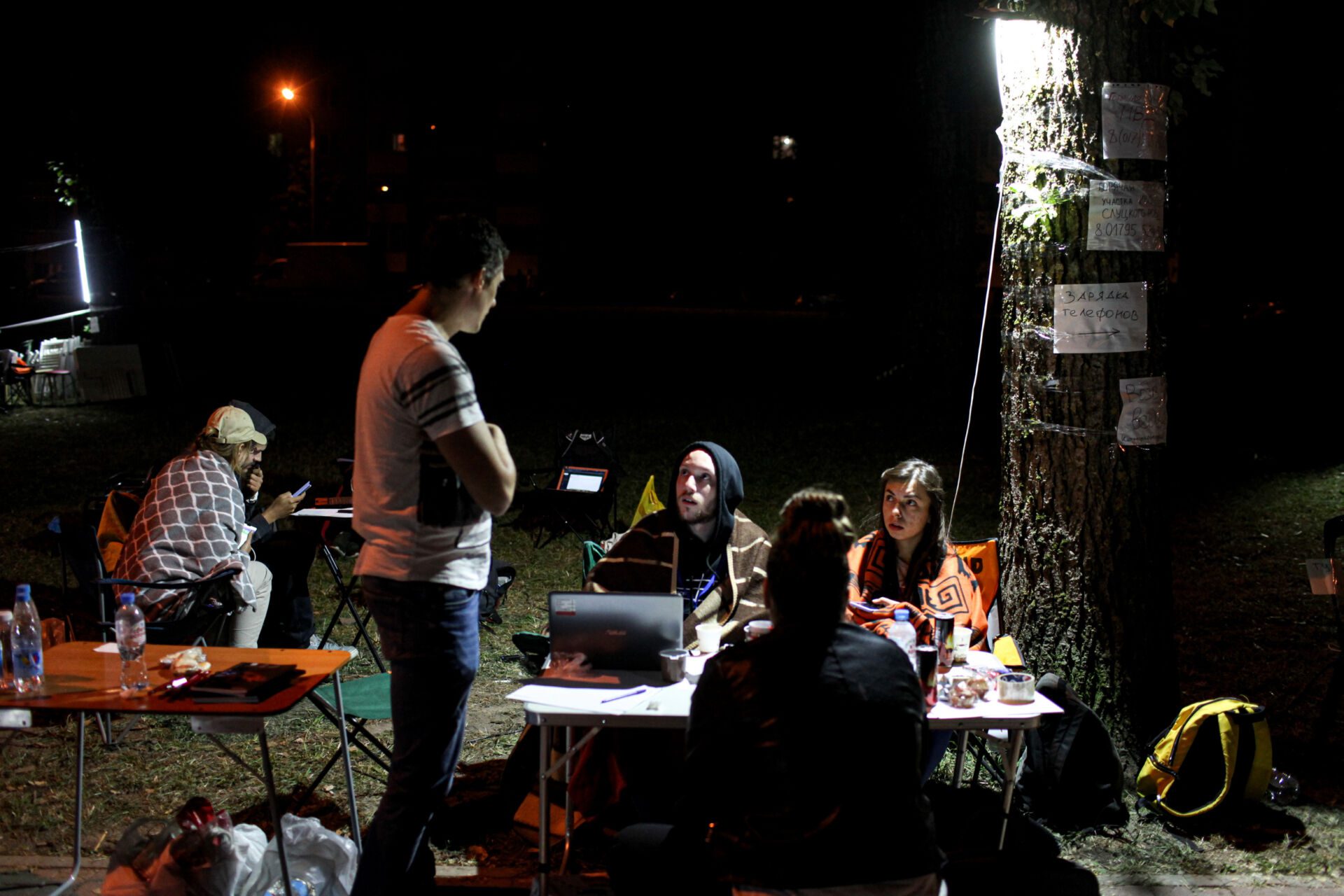 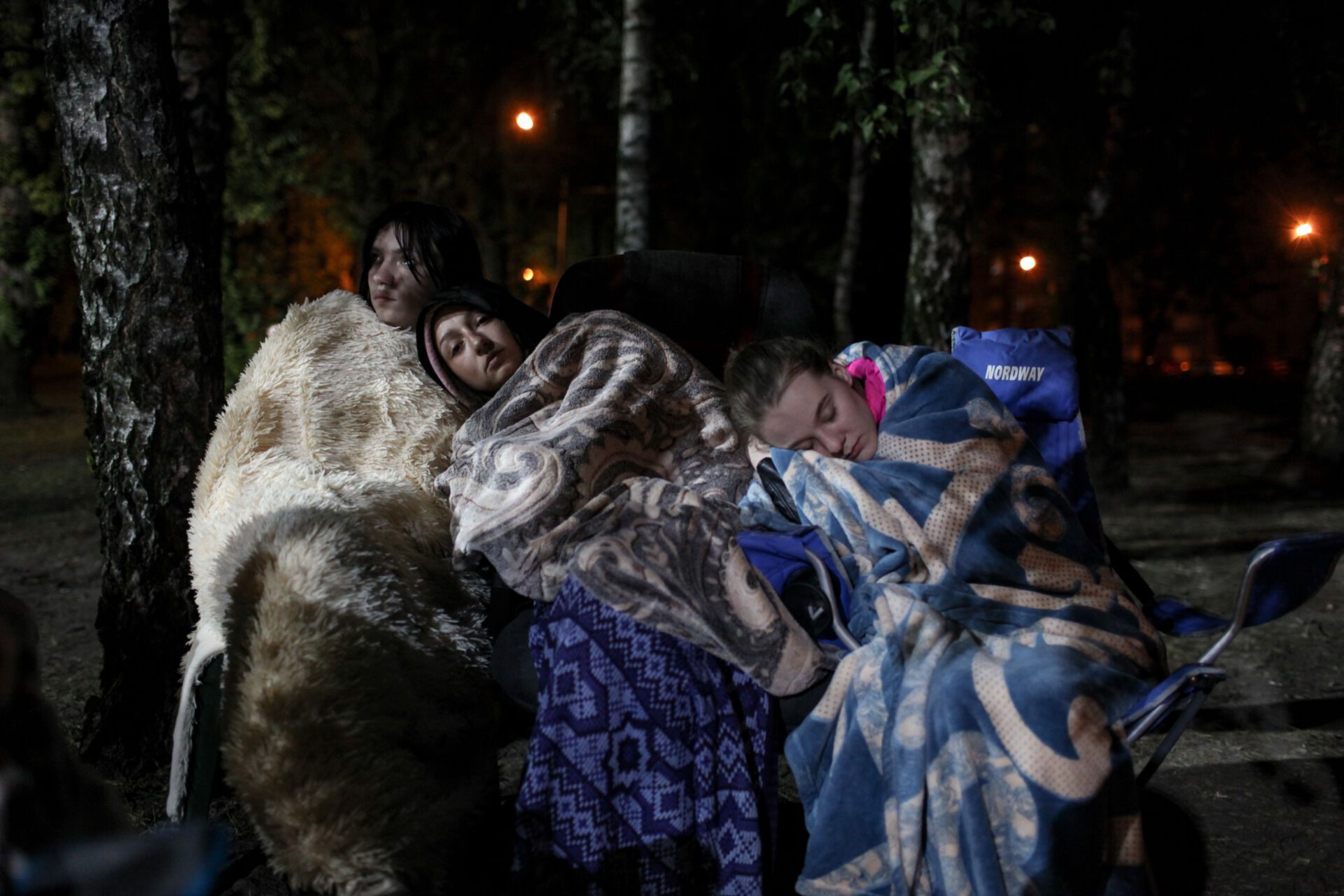 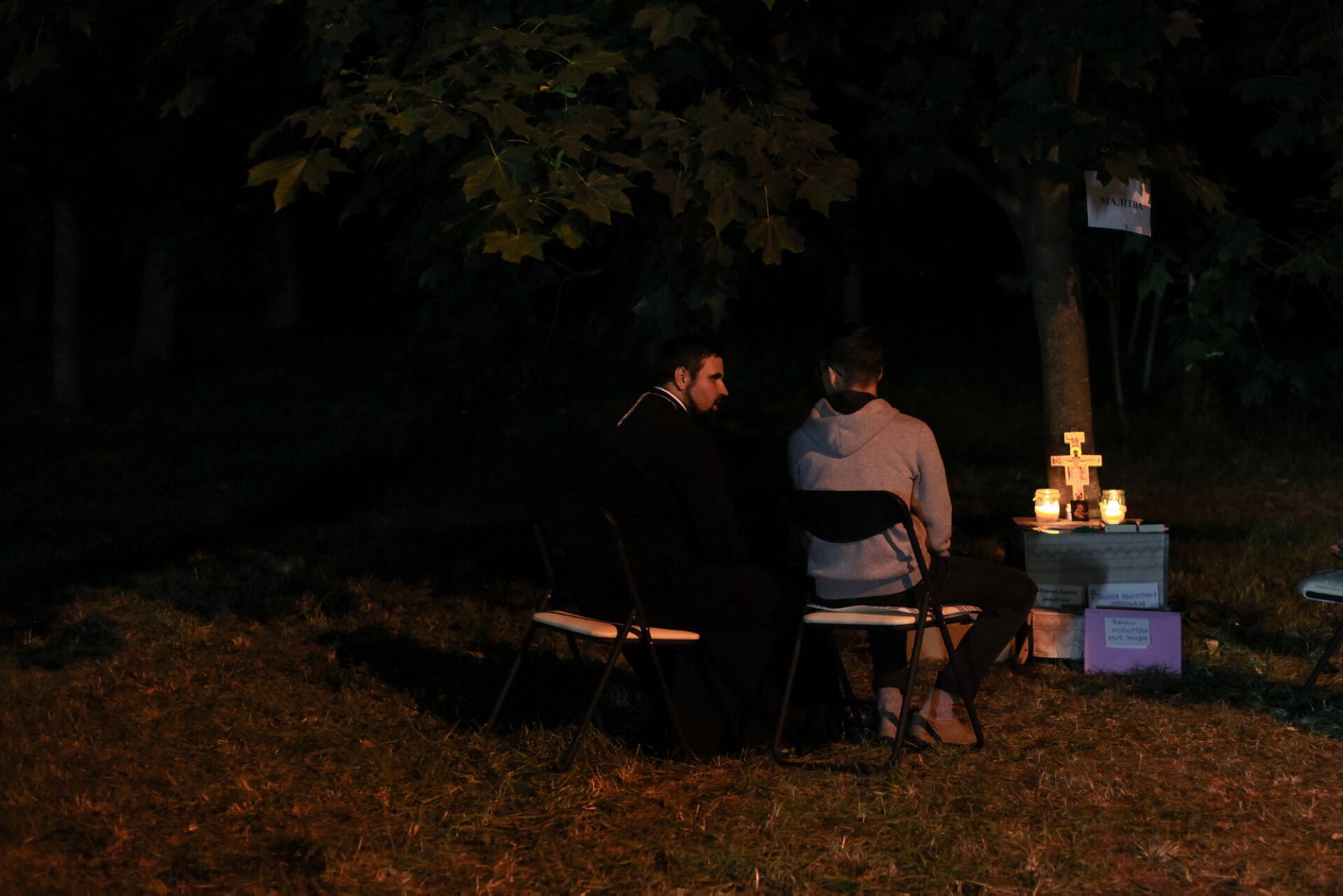 An Orthodox priest on duty at a volunteer camp near the Okrestina prison.
August 15, 2020. Minsk, Belarus. 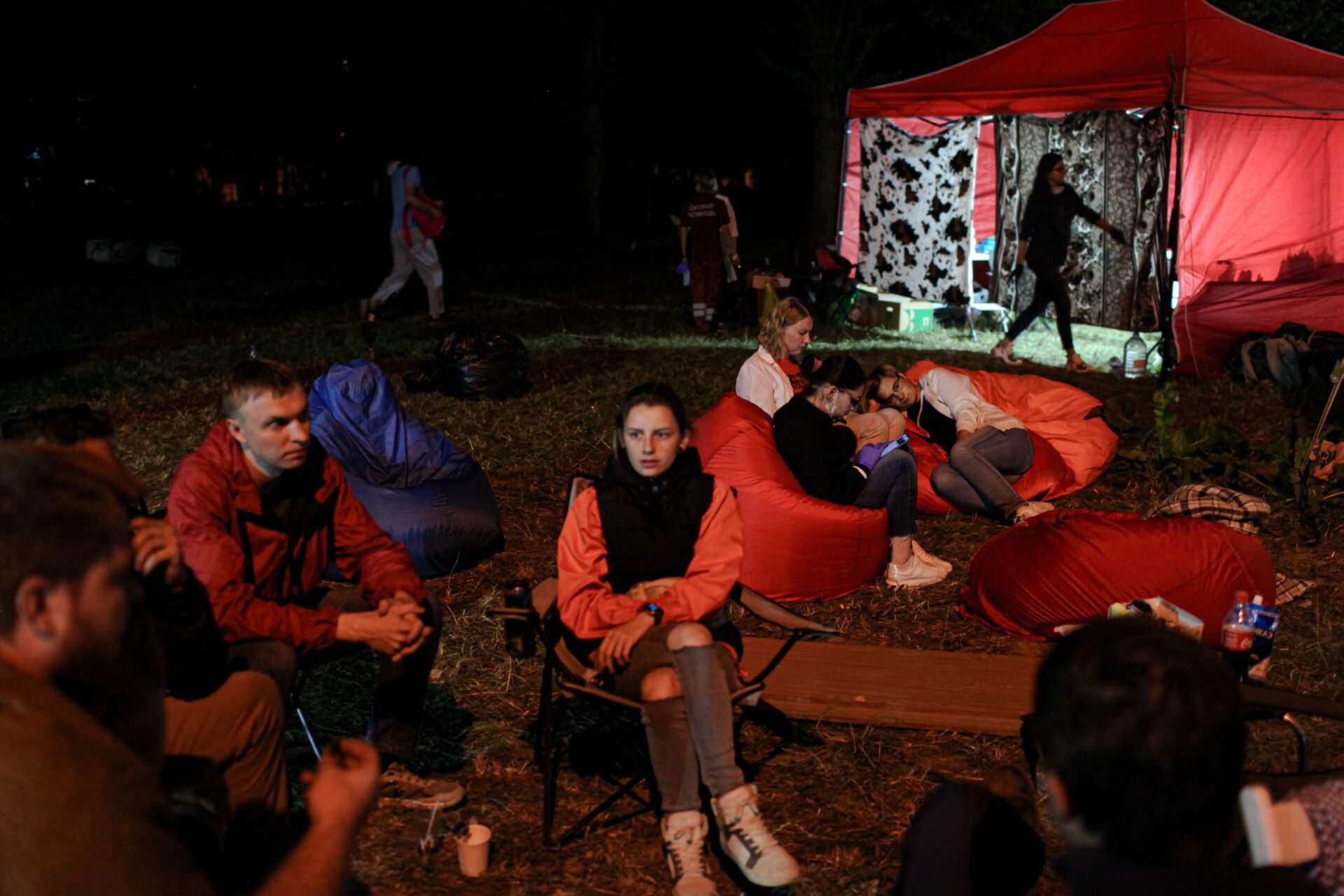 For many people in the first days of the arrests and incredible violence, it was a challenge to find a place and live their everyday life. So they came to the Okrestina prison volunteer camp and helped victims and their relatives in cooking, coordinating tasks and giving psychological help.
August 15, 2020. Minsk, Belarus. 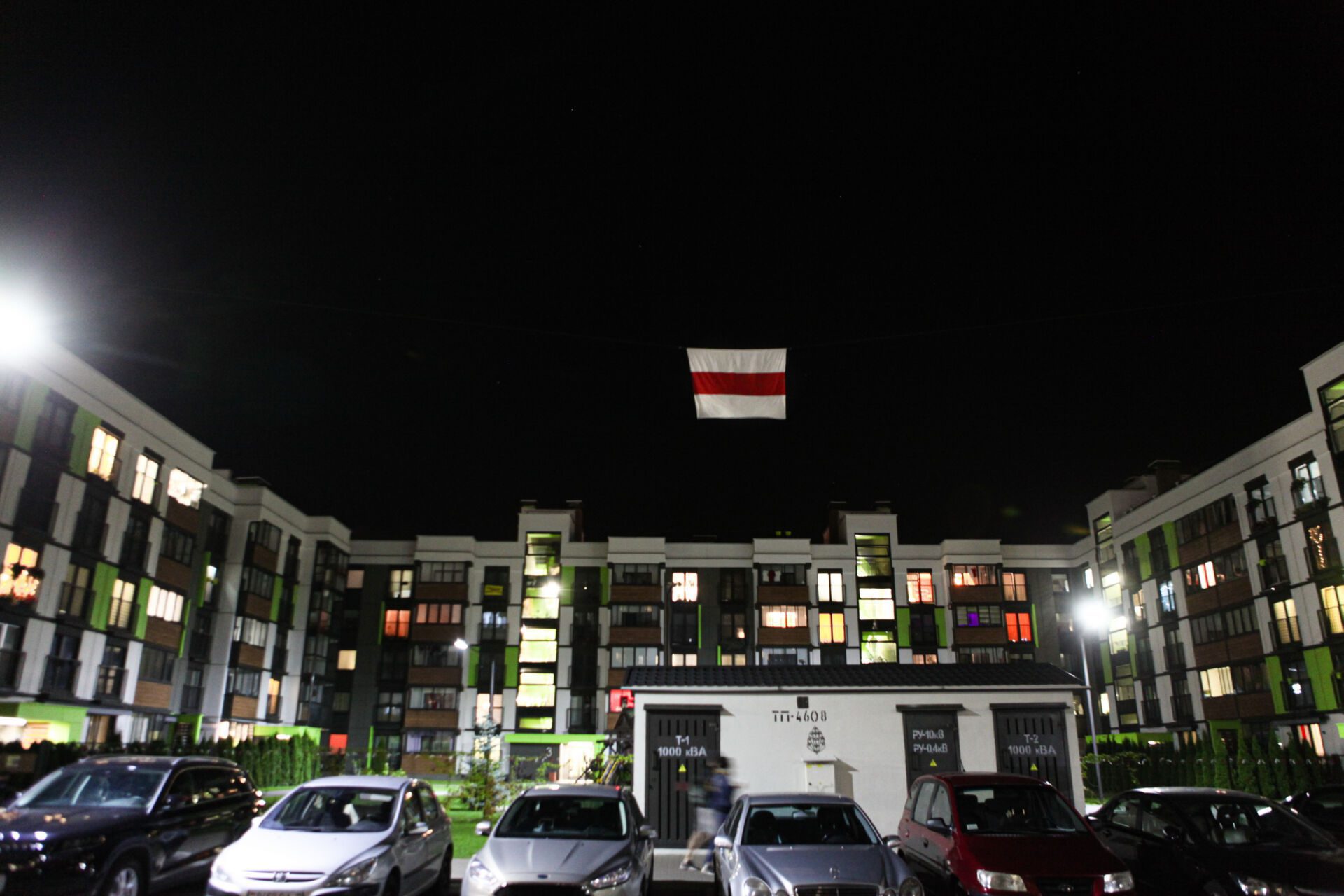 National (non-state) flag became more than a part of national identity as it was before; it became a symbol and a marker of mass protest. Flags and combinations of white-red-white colours started appearing in windows, buildings and streets all over the country. In response, local authorities tried to stop the spreading of them. In the photo: a flag in minidistrict Novaya Borovaya.
September 10, 2020. Minsk, Belarus. 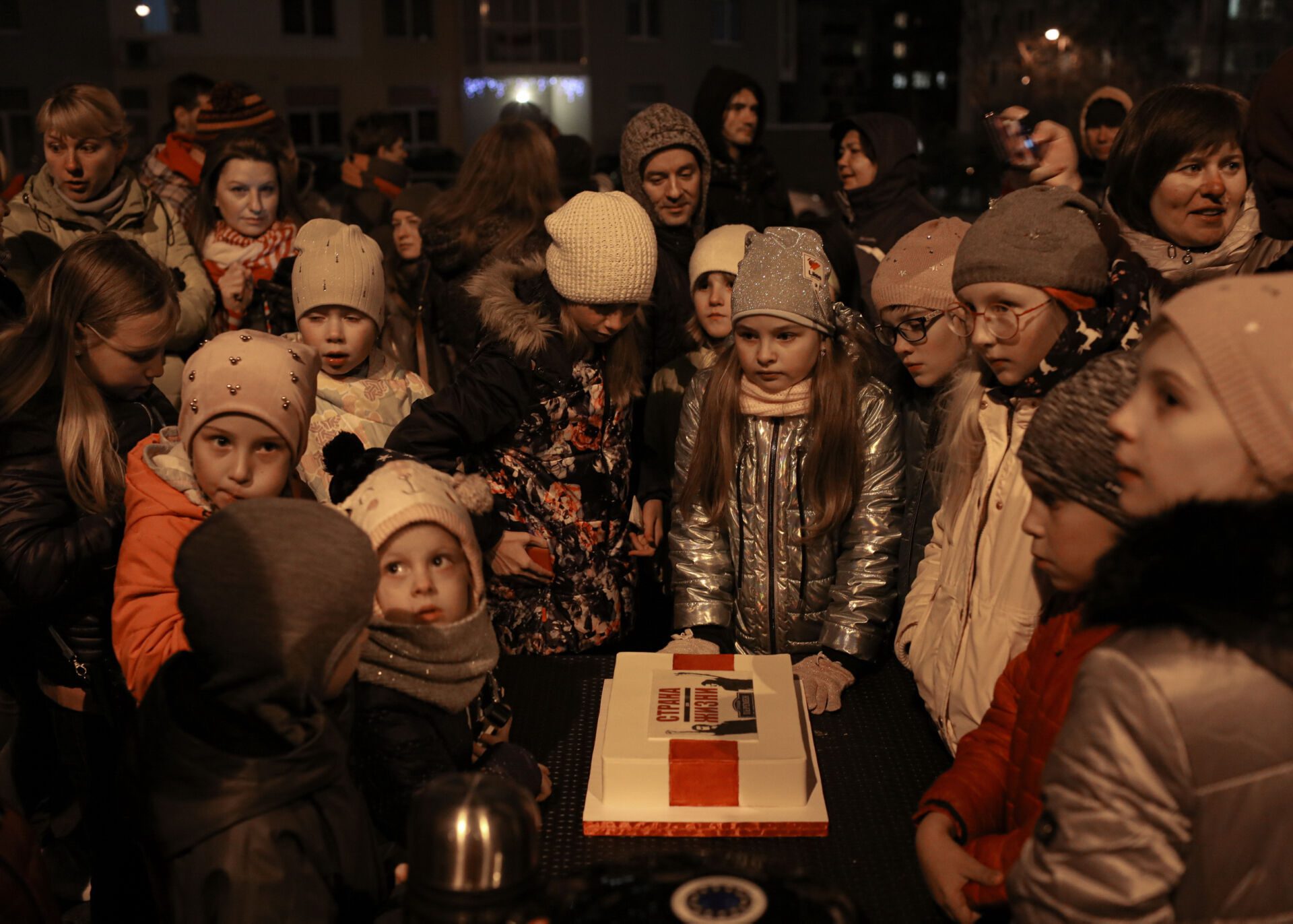 Children are waiting to eat a cake at the Square of Changes.
Minsk, Belarus. October 17, 2020. 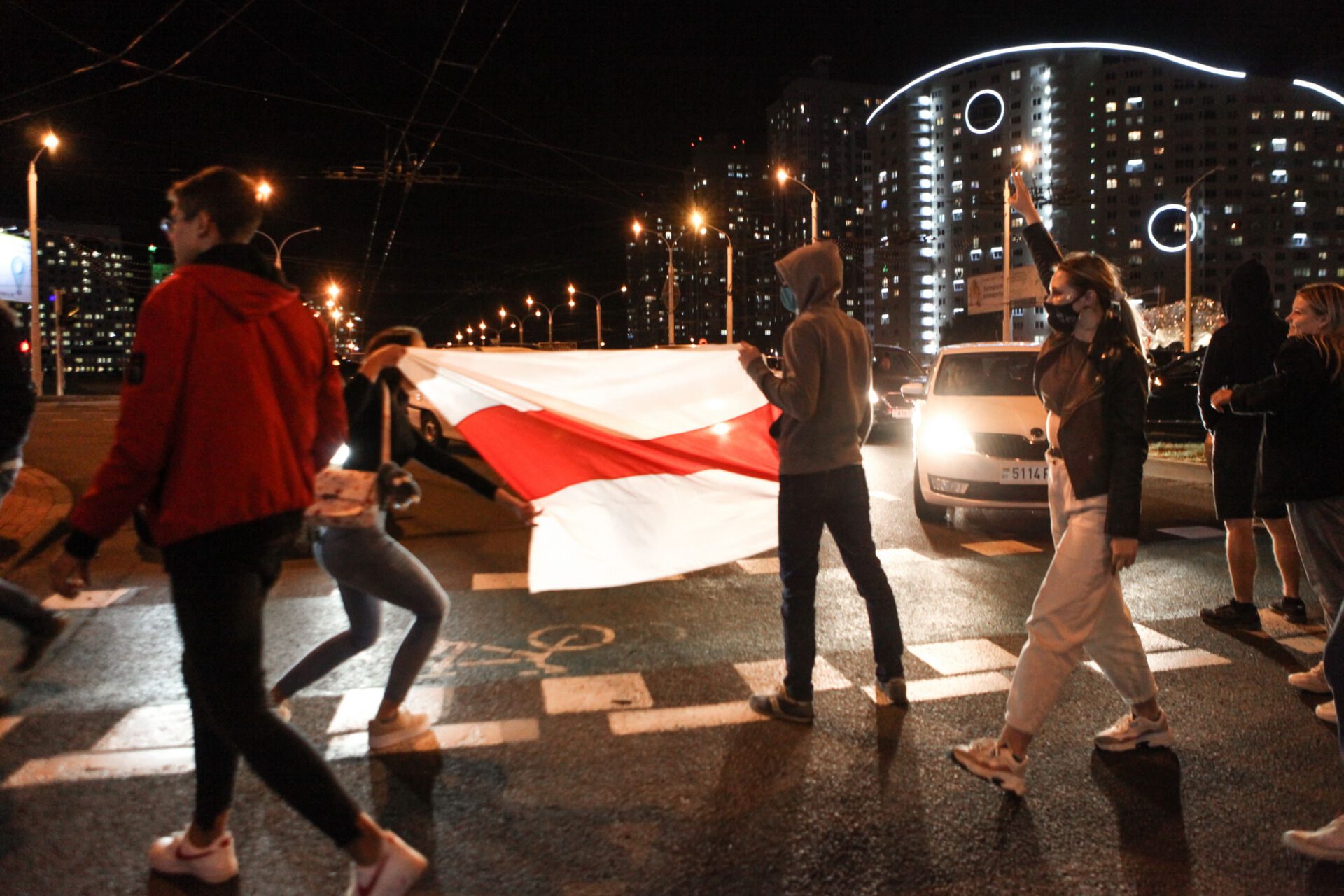 Telegram channels call to block roads all over the city to paralyze the city and keep the protest going on. It happens from time to time, but the authorities consider it as a criminal offence that could lead up to three years of prison. Plenty of criminal cases for blocking roads have been opened already.
September 23, 2020. Minsk, Belarus. 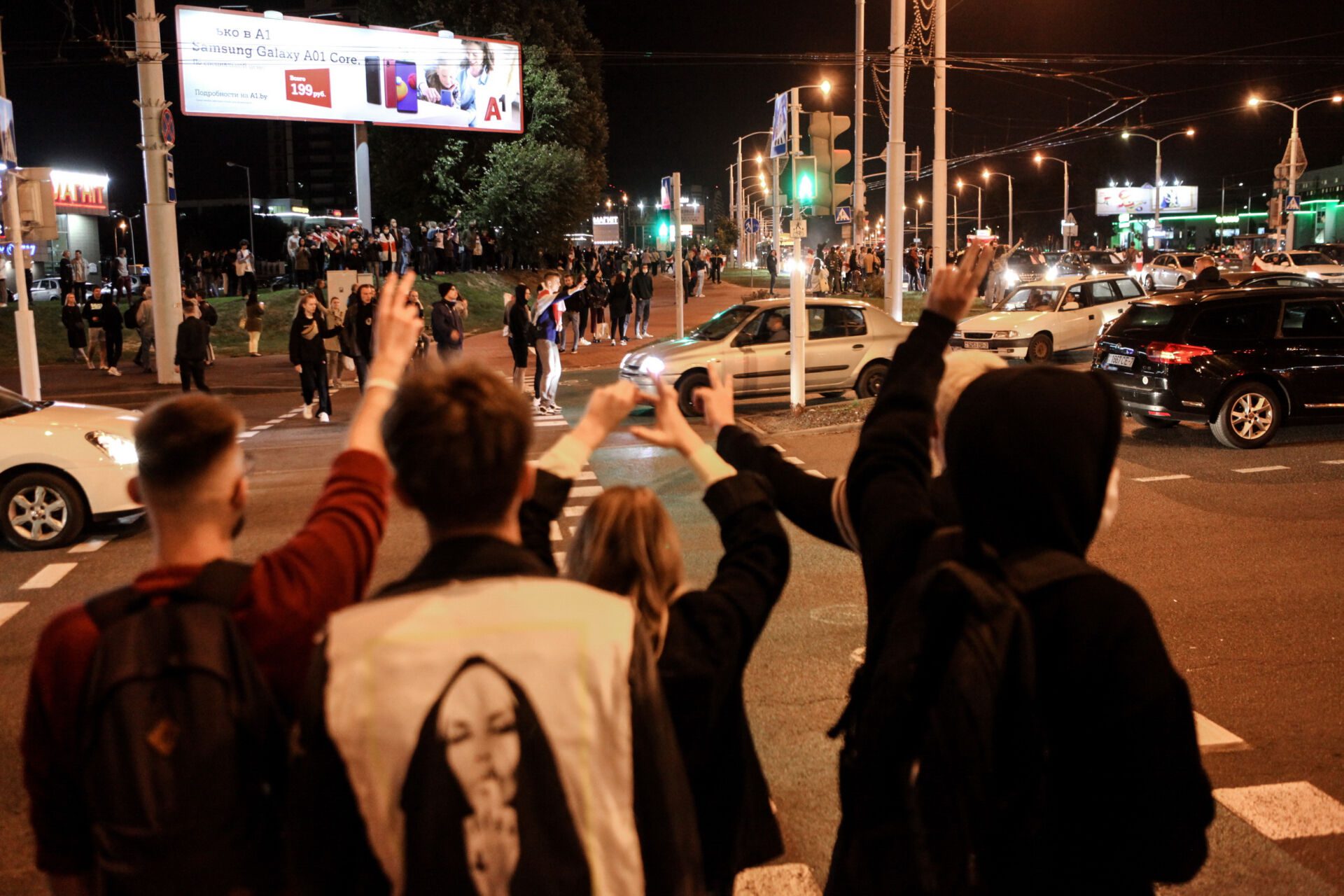 Protesters are blocking the road in the evening because of Alexander Lukashenko’s hidden presidency inauguration. The blocking of roads all over the city in attempts to paralyze everyday city life and becomes one of the forms of protest and is harshly persecuted by law enforcement.
September 23, 2020. Minsk, Belarus. 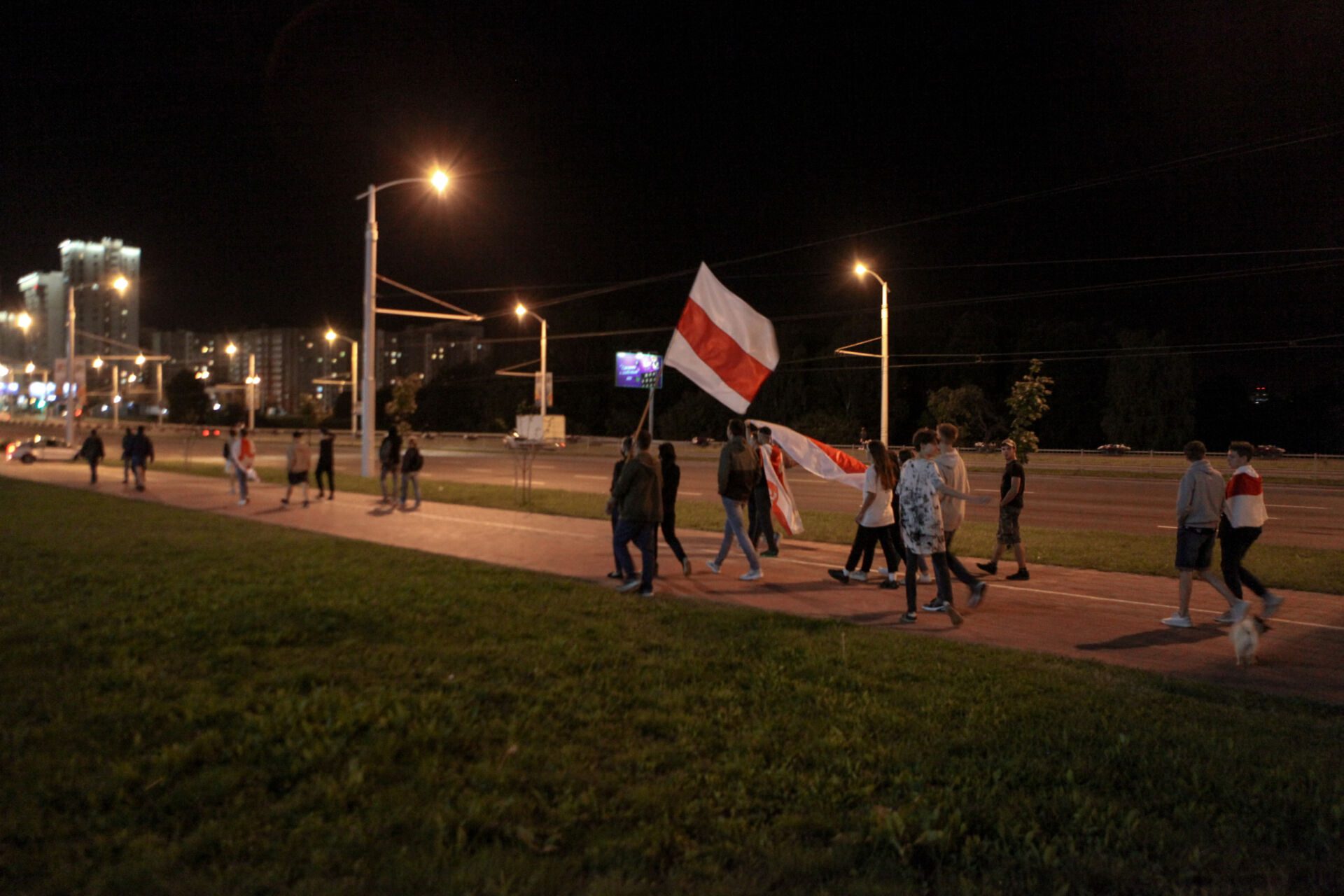 Local marches with national flags in the evenings played a significant role in the decentralization of protest. It is more difficult for the police to disperse marches in different parts of the city, and small groups of protesters are more mobile.
September 5, 2020. Minsk, Belarus.