Meat in a virtual desert 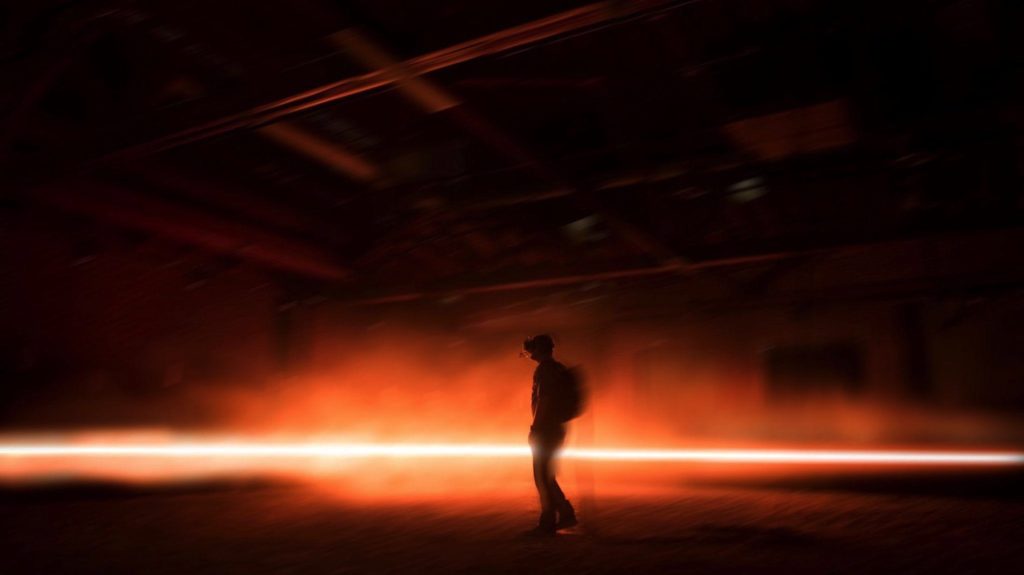 Meat and Sand (Carne y Arena in Spanish) is a 7-minute-long virtual movie by Alejandro González Iñárritu, the Oscar-winning director of Birdman. His vision allows the viewers to step into the role of an illegal immigrant.

The floor of a 200-square meter room is covered with sand. Lamps installed at feet-height beam with orange light. The place is completely silent. One of the staff at Meat and Sand exhibition puts a sensor-equipped backpack on my back and asks me to wear virtual glasses. “When you immerse yourself in virtual reality, you will be able to walk across the room and jump but you must not run. If you feel a slight jolt, it means that you are too close to a wall and that you should move in another direction”, he instructs me.

For a moment, all I see is black emptiness. A moment later, I’m suddenly teleported to a desert. It dawns. I’m surrounded by a sea of sand with cacti growing here and there. In the distance I notice a group of men and women with children. I approach them. One man is my height, has a moustache and is wearing a flannel shirt. He pulls out a phone and calls his wife to tell her not to worry about him. Walking behind him is an elderly woman with a little girl. The young one is wearing a small, colourful backpack but the older lady says that she is running out of energy. My guess is that they are immigrants from Latin America, trying to illegally cross the border with the United States. And I’m a part of their group.

Suddenly, the time of the day changes and the night sets in. We are still marching. Unexpectedly, I hear the roar of helicopters. I’m dazzled by their white lights. I can also feel sand on my face. Then I notice a soldier with a rifle, screaming in English, that we lay down on the ground and put our hands up. My first instinct tells me to run and hide in one of the nearby bushes. Unfortunately, the soldier notices me, aims in my direction and screams again. I start to panic and fall to the ground, terrified. I feel the grains of sand under my fingers. For a moment, I forgot that this is only a movie and that I’m not in real danger.

Meat and Sand is a 7-minute-long virtual movie directed by Alejandro González Iñárritu, a Mexican film director living in the United States. It was produced in cooperation with Emmanuel Lubezki, a Mexican cinematographer who received numerous Academy Awards for his work on films such as Birdman, Gravity and The Revenant. The director based the plot on the accounts of people who for several days marched in the heat of the desert to illegally cross the border between Mexico and the United States.

Unfortunately, not all the refugees manage to survive the attempt. Every year the border patrols find between 200 to 300 bodies of people who died from exhaustion. Although Donald Trump began the construction of a border wall to separate the USA from Latin America, immigrants do not seem to be discouraged by it. They just try to walk around it. This additional obstacle has extended their journey by up to 12 days. The author of the installation wanted to sensitize the viewers to the migrants’ fate.

“This is a unique experience for each visitor. I think that it is also cathartic and full of emotions”, said Iñárritu in 2017 in Cannes, where he presented his work for the first time. “Today the whole reality is distorted as we talk about immigrants, when they are, in fact, refugees. I did not want to close my vision so one of the scenes shows that some people must cross the oceans, others – deserts. I have emigration inside me, I represent it and highlighted this topic in my film called Babel and, to a lesser extent, in Biutiful. But I wanted to go further and remind people that immigrants are not a threat but an opportunity. They are the second economic power in Mexico, right after the income generated by the crude oil.

Meat and Sand this year also won a special Oscar award in recognition of a “visionary and powerful narrative experience”. John Bailey, the President of the Academy of Motion Picture Arts and Sciences, wrote in his a statement that “Iñárritu and Lubezki opened a new door to cinematographic perception”.

Some have even wondered whether the exhibition is a political statement of the acclaimed director aimed against Donald Trump. Iñárritu denied that, adding that he began working on the film in 2013, “before the current reality”.

“For me, it was an attempt to explore the human condition using art which would tell a story of the human reality and the global crisis of humanity. Not only a geographical and nationalist crisis”, he said.

Boots in the desert

The film is a part of a larger installation prepared by the director. In a different room, I suddenly found myself inside a replica of a room where migrants caught while crossing the border are detained. The walls are made of sheet metal, the room has no windows and is cold. On both sides of metal benches there are boots found in the desert. In a different place, I pass a wall that reminds the one that divides Mexico and the United States. It is very solid and high, difficult to climb single-handedly. Here I can also learn the history of immigrants from countries such as Nicaragua, Mexico, Honduras and El Salvador who talk about their reasons for leaving their homelands. They fled not only the poverty, lack of prospects but also the organised gangs threatening their lives. Some migrated to a new country as children and, although by now they have received education, got jobs, set up American families and raised children, nevertheless stand no chance of legalising their stay.

A license for one million dollars

The installation is now travelling all over the world. It was presented in Los Angeles, Milan and in the Tlatelolco cultural center in Mexico City. Although Iñárritu mentioned in interviews that the film is not for sale, the government of Mexico had to pay more than one million dollars for licensing it. Another half a million was the cost of the transportation and installation. In overall, the exhibition is more expensive than others that have been presented in Mexico City in recent years. Besides, it can be visited only by one person at a time and only fifty people can watch it throughout the day. However, the organizers believe that the exhibition will bring a profit because the tickets are selling like hot cakes with no advertising involved.