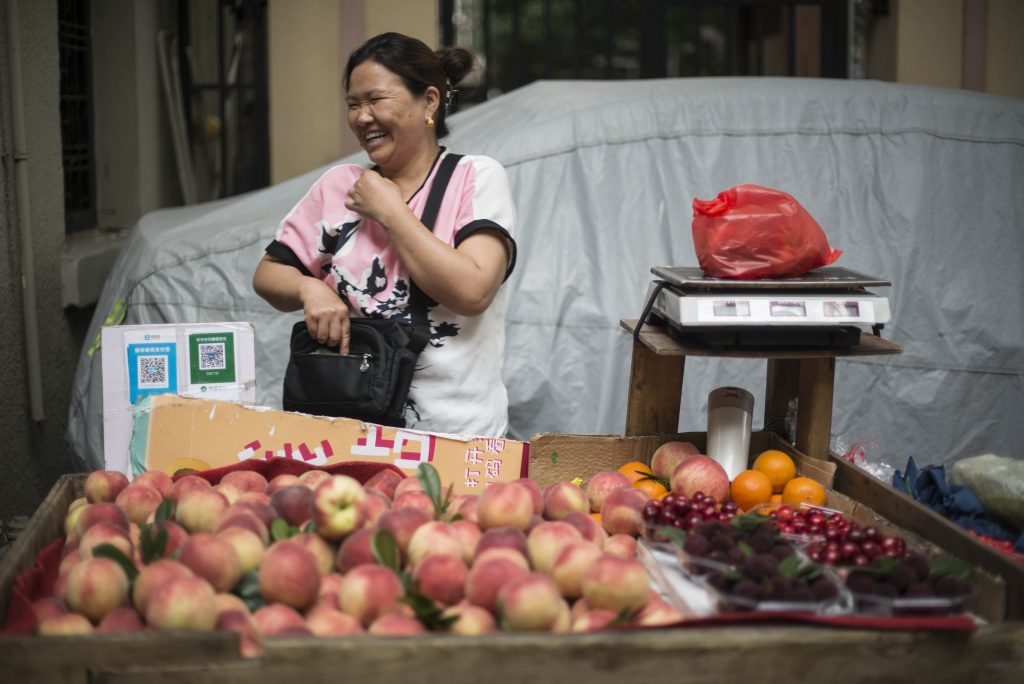 Inside a Cashless Society (almost)

In China, a pan, the energy bill or a kiwi from a street vendor are paid with the mobile phone. Over half a billion Chinese use the smartphone for their daily purchases.

It is a Tuesday of September in Shanghai. Zel Wang, 29, a graduate in Applied Mathematics, has some dumplings with soybean juice at a random store for 8 RMB (around 1 euro), scans the QR code and pays with the smartphone. Once in the office, he requests two courses from the gym App. For lunch, Zel orders a set meal with the mobile phone from a food delivery service. On his way to the gym, he drinks a coffee from Luckin, “a cafeteria that does not accept any transaction other than mobile payment”, Wang explains. And he comes back home using a shared bicycle that he pays with the phone.

It is an ordinary day in the life of this young Chinese. Wang admits he pays every single daily purchase with his mobile phone: utilities like water, electricity, gas, Internet, mobile or services like a taxi or a doctor. If he needs clothes, shoes or books, to go to the cinema or to buy some electronic devices, he buys them also with the smartphone. He does not remember the last time he uses cash. “Oh, wait, about two months ago when I went to the dentist. The medical insurance partly covers the registration fee, and they only accepted cash for the rest”. He is not the only one in China without cash in the pocket.

Online payment users reached 531 million by the end of 2017 in China, according to Xinhua news agency. It jumped 11.9% from a year earlier. From 2013 to 2016, the number of transactions made through non-banking mobile apps increased from 3.7 billion to more than 97 billion, according to ‘2017 Mobile payment usage in China’ report by Tencent Institute and Ipsos. According with that report, 14% of Chinese never carry cash like Wang, 40% carry daily less than 100 RMB (12 euros) and 84% of the interviewees feel calm when they do not carry any coins or notes.

“No Cash Acceptable”, reads the wall of a takeaway coffee shop on Changshu Road. Besides, there is a row of shared bicycles that only can be rented through the phone. On the sidewalk, a flower vendor and a fruits vendor have a big QR code on their carts. Today, in a Chinese city like Shanghai, daily activities such as buying a pan in a kitchenware store can become an impossible task without the suitable app, as happened to this journalist who left the store without any pan. 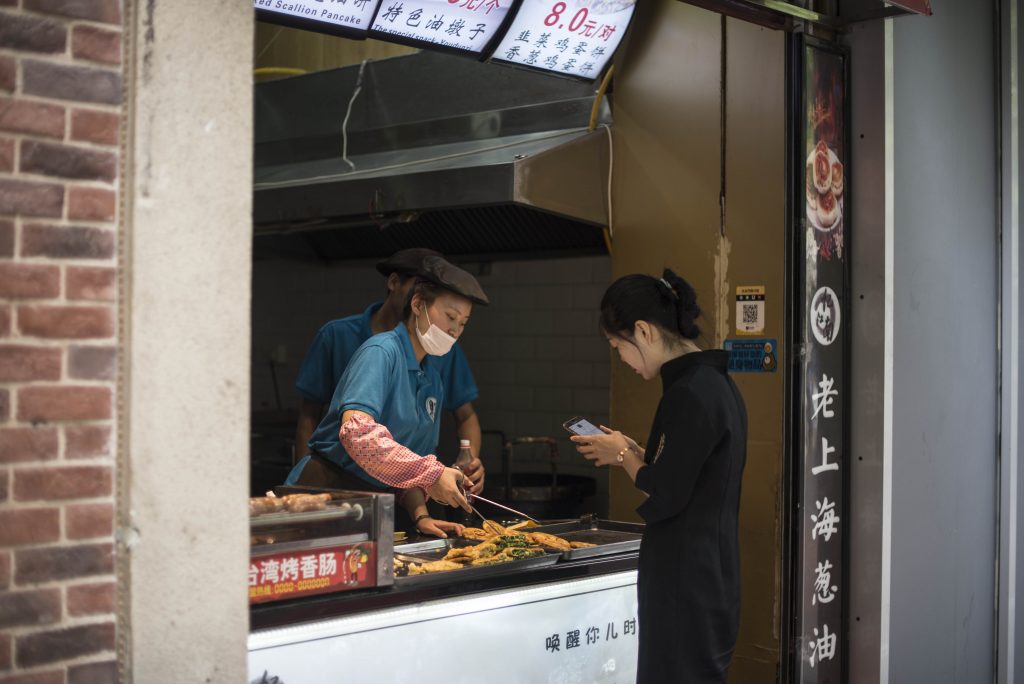 A young woman pays for some snacks using her smatphone in a store in Huahai road in Shanghai.

“Do you want to buy a chair?”, Lucy, the real estate agent, asked stunned while waiting for our turn in the bank. She took a picture of a stool, uploaded it on the Internet and showed the same chair that appeared online for sale. “Very easy, on Taobao”, she added referring to the world’s biggest e-commerce website where busy Chinese young people buy everything. “And how can I pay the energy bill?” I replicated. “Here, click” she cleared up showing WeChat. Forget the traditional sentence in the restaurant: “Do you pay with cash or credit card?” In China, the question is: “Alipay or Weixin?” They are the two most used mobile payment tools. Alipay created by Alibaba Group and WeChat (Weixin in Chinese) developed by Tencent.

It contrasts with the habits in America and Europe. China’s mobile payments market is 50 times the size of USA’s, according to World Economic Forum. In 2016, “79% of all transactions in 19 Euro area countries were carried out using cash”, according with ‘The use of cash by households in the euro area’ report conducted by European Central Bank. Cards were the second most frequently used payment instrument in euro area (19%). That year, euro area consumers paid 124 billion with cash, 30 billion with cards and only 3 billion with other instruments such as checks, debit and credit transfers or mobile payments.

There are other countries in the world becoming cashless societies like Scandinavian countries (Sweden, Norway and Denmark) and the United Kingdom. For example, only 25% of Swedes paid in cash at least once a week in 2017, regarding Insight Intelligence. One of the main differences is the volume. The population in Sweden is less than 10 million; China has near 1,400 million inhabitants. The second one is the dominance of debit cards. In Sweden, for example, although the use of cash is declining and people are increasingly using electronic tools like “Swish” App, “debit cards are still dominant among electronic means of payment”, a report conducted by Riksbank, Sweden’s Central Bank, explains.

“People (in Europe and America) are used to the card payment culture, and there are fewerdesires from the public to switch the existing payment system to other payment channels”, consultant Felix Yang from Asia Payments Kapronasia Shanghai, convenes. It is one of the reasons why China became world’s largest mobile payment market, Mr Wang argues, “the card payment system in China is not as fully developed, which gives mobile payment the opportunity to disrupt”. In addition, “from the consumers’ side, the Chinese citizens are more educated and open to new ideas, and Chinese mobile payment firms captured the market quickly by providing huge discount and promotions”. And “the Chinese regulators did not bring in tight regulations at the beginning, they let mobile payment market grow and brought in regulations to control the risk afterwards.” 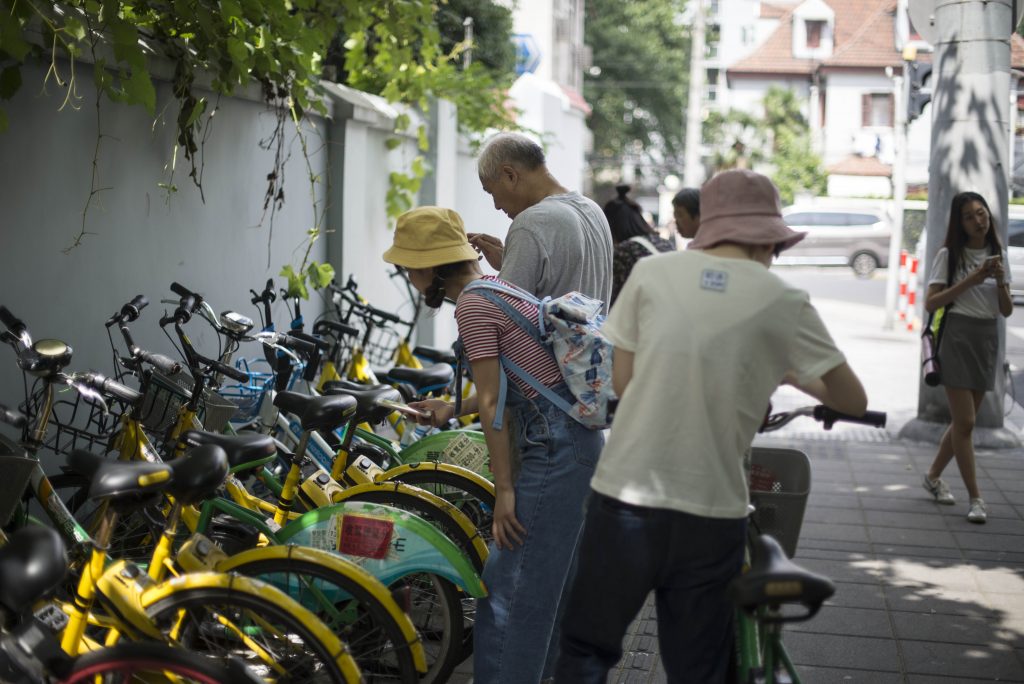 Users of shared bicycles in Shanghai scanning the QR code.

It is also remarkable how a new payment method has managed to adapt to the ingrained Chinese habits and traditions. Some experts already talk about the “Red envelope strategy” alluding to the red envelopes full of money that are given to relatives and friends during the Chinese Lunar New Year. It is an ancient tradition for centuries that in 2014 was digitalised. Until then, Alipay was the single player in the e-Wallets scene. That year, Tencent launched the “digital red envelope” for its messaging App, WeChat. Users could post such envelopes on their chats, and those who clicked got money. The feature went viral. In China “viral” means that over five million users exchanged more than 20 million envelopes in two days. Alibaba Group’s father Jack Ma compared it with a “Pearl Harbour attack”, according to Reuters. About 768 million people used the service in 2018, Xinhua agency says. Today, Alibaba and Tencent are two major players in mobile payments in China and the global leaders in this field.

Cash is vanishing in China; the intermediaries do not. In 2016, Apple launched in China its mobile wallet, Apple Pay, trying to get a slice of the pie. But the competitors are well settled. In 2018, Apple Inc had to accept Alipay in its stores in China. WhatsApp is also testing a money transfer service in India, according to Reuters. And abroad markets are adapting to the succulent e-wallets of the numerous Chinese visitors. From Mango stores in Spain where paying with Alipay is already possible, according to Europa Press agency to Paris subway where Chinese travellers can pay with WeChat. 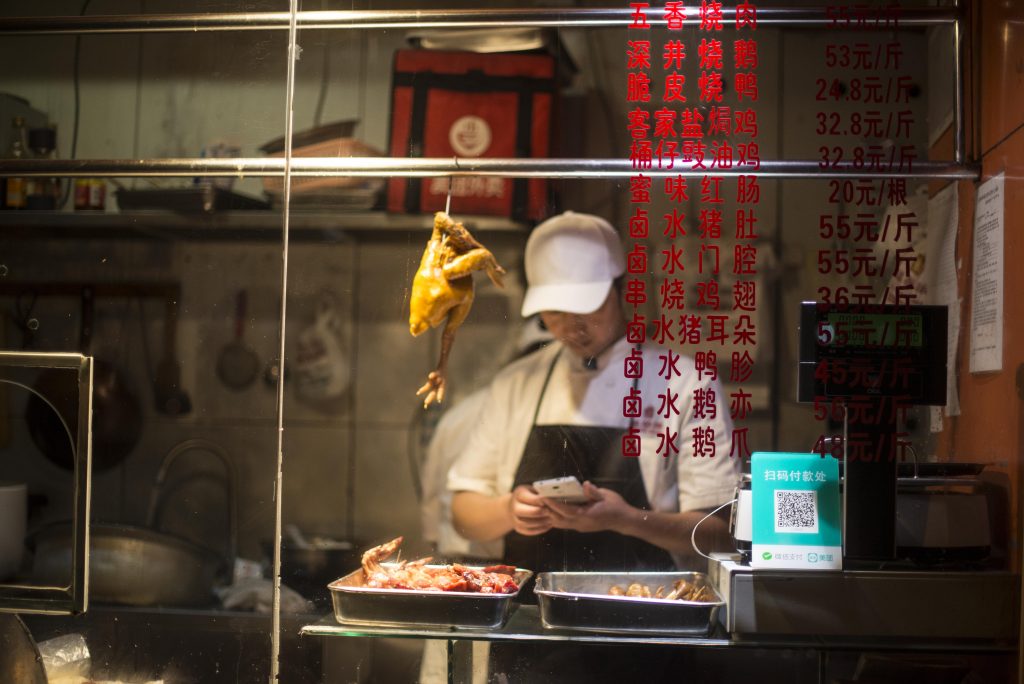 In most of the restaurants in Shanghai the question is not “Do you pay with cash or credit card?” but “Alipay or Weixin?”.

Will cash disappear soon in China? Mr. Wang does not believe it will be so. “There are places still accepting only cash in China especially in less developed rural areas” and “many Chinese from the old generation prefer the physical feeling of cash”, Mr Wang says. “On the corporate business side, cash is also still used in many occasions.”

Kapronasia consultant sees pros and cons in a cashless society: “It can bring many benefits, for example, less cost of producing the cash. A cashless society can reduce the risk of robbery and fraud, and it makes the payment process more efficient.” “However, a cashless society also brings concerns in many aspects”, he adds, “such as privacy, the dependency on technology infrastructures – if there is a natural disaster or war, the payment system may not work, and it will cause chaos— and some ethical issues: when money only appears as a number to the consumers, they may keep spending it without realizing the limits”, he concludes.

Is it the Future? Well, the future can be more smiling. In 2017, Alibaba’s Ant Financial affiliate launched the ‘smile to pay’ service in a KFC in the eastern Chinese city of Hangzhou, and there are already people in China paying the chicken with their faces.

Photo: A Fruit vendor in Shanghai who uses QR codes for mobile payments.