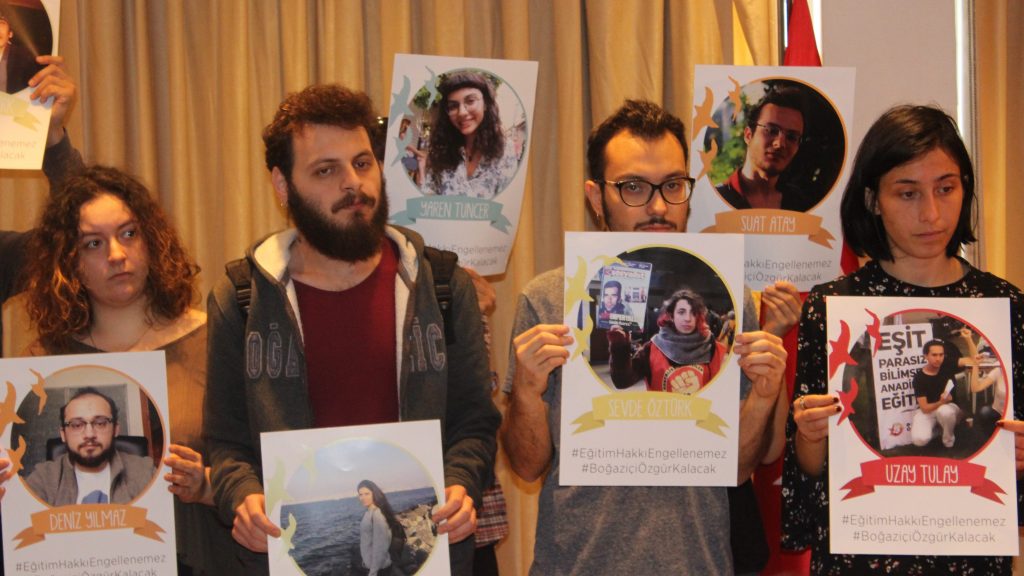 In Turkey, calling for peace lands you in jail

Students, academics, and a young teacher have been jailed or sentenced to prison for the most innocent of all charges: Publicly calling for peace.

Özgür Tuncer’s daughter, Yaren, is one of 13 students jailed and standing trial for staging a peaceful, anti-war protest at the campus of Boğaziçi University, Turkey’s highest ranked academic institution.

“She could express herself freely at home, so she thought she would be able to do the same in the street,” Özgür said. “My daughter is just an 18-year-old child who is trying to learn and understand.

While her daughter languishes behind bars, her mother has joined with other desperate
parents, teachers and friends to protest at a press conference in Istanbul on April 10 this cruel punishment for expressing dissent over Turkey’s military operation in Syria’s northwestern district of Afrin. “

“These are children who want peace!” Özgür Tuncer said, her voice on the brink of tears.

Boğaziçi students were once regarded as Turkey’s crème de la crème. Entrance standards are generally the highest of any other institution; admission was already a sign of high achievement. Now, the government is trying to rebrand the university’s progressive approach to education as a type of social disease.

The public prosecutor has declared war on those in education calling for peace as was the case for Ayşe Çelik, a young teacher who said “Don’t let children die” during a television phone-in talk show broadcast two years ago, and who began her 15-month jail sentence on April 20.

Equally ruthless has been prison sentences recently imposed on academics who signed a peace petition. Universities in Turkey are no longer zones of free expression and speaking your mind can mean paying a heavy price.

Prosecutors are seeking to charge students with “conducting propaganda for a terrorist organization”, a crime that can carry up to 5 years in prison. Evidence of their guilt according to the prosecution, was unfurling a banner reading “No lokum for invasion and massacres” in reaction to another group of students who distributed celebratory sweets, known as Turkish delight, after Turkish military seized control of Afrin.

After the incident was blown up by pro-government media, mayhem ensued.

“I am proud of them for trying to express their thoughts,” said Tilbe Akan, a student at Boğaziçi’s Western Languages and Literature department. She was arrested but later released from detention. “This school is being targeted for allowing opinions suppressed by the government,” she said.

Not one to avoid adding fuel to the fire, President Recep Tayyip Erdoğan branded the protesting students as “communists,” “traitors” and “terrorist youth” during a public speech on March 24 in which he congratulated the police. “We won’t give them the right to study at these universities,” Erdoğan said.

“They didn’t get into Boğaziçi through anyone’s good graces but through their own merit. No one has the right to deprive them of their freedom to get an education,” said Bülent Yılmaz, whose son, Deniz, was also jailed. “Their place is not prison, but the campus. As the families of Boğaziçi University students who have been imprisoned and investigated, we call on those who pointed fingers at our children and the university to apologize.”

Those students who were released pending trial said they had been subject to beatings and torture while being detained by the police and under custody. Parents also referred to “psychological pressure” on their children.

“The university is suffering,” he said.

And it’s been a while that Turkey’s universities have been suffering, especially since the declaration by hundreds of academics of a peace petition entitled “We will not be a party to this crime” in protest of human rights abuses during military operations conducted across several provinces in southeast Turkey. The petition was made public on January 10, 2016, with the initially 1,128 signatories. The number of signatories surpassed 2,000 in the weeks that followed despite a strong reaction from the government.

Criminal charges have been pressed on 265 of the “peace academics”, as they have been called since, as of April 20, 2018, but more trials might be underway. While most the ongoing trials have been adjourned, at least 10 academics have been imposed suspended jail sentences of 15 months on charges of “conducting propaganda for a terrorist organization. In the case of Galatasaray University professor Füsun Üstel – a political scientist expert on Nationalism in Turkey – the sentence was not suspended by the court. Üstel, who apparently didn’t request a suspension of the execution of the sentence, will serve jail time if the verdict is not reversed on appeal.

Another example of how prosecutors have sought sentences for innocent calls for peace that caused a huge public outrage is the case of Ayşe Çelik. Publicly known as “Teacher Ayşe”, she entered to the Diyarbakır Women’s Prison Facility April 20, 2017, to serve a 15 months jail term on “propaganda” charges, having to bring her six months-old daughter Deran alongside with her. “Don’t let children die” she had said on the widely popular live TV programme Beyaz Şov aired on Kanal D on January 8, 2016, which she joined through a live call from Diyarbakır’s Silvan district. These seemingly innocent words are now costing her’s – and her daughter’s – freedom.

Her shivering voice and heartfelt call over human rights abuses, including civilian killings during army operations in many cities with a majority of a Kurdish population.
Received a massive wide echo. Tens of thousands of people pleaded for her acquittal, but it wasn’t enough for preventing a sentence, which would be eventually postponed during her pregnancy.

“I didn’t speak that night after being affected by what I saw on social media or on TV channels. I spoke as someone who was experiencing what was happening,” Çelik said in an interview published on the online news website Gazete Duvar April 20, 2018. “I said something that everyone could say anytime. What is more natural than for a teacher and a woman to say ‘don’t remain insensitive for people who are dying, speak up’?”

Natural, yet disturbing. At a time when warmongering discourse is thriving, anyone who calls for peace is assimilated to positioning oneself against the state, thus, the government. Dozens have been arrested and jailed over innocent social media posts criticizing Turkey’s military operations. In contrast, a nationalist mafia boss Sedat Peker, who faces 11 years in prison for threatening peace academics saying “We will let your blood in streams and we will take a shower in your blood”, enjoys warm ties with the government.

The criminalization of “peace calls” is further proof of the Orwellian distortion of the ideas of “good” and “bad” in Turkey.

Çelik’s words in her interview will echo anyone facing a one too many arrest, investigation and sentence for merely expressing their longing for peace: “I did not commit a crime. I am here, standing, with my pride, my dignity.”

Photo: Bogazici students hold pictures of their friends who have been jailed during a press conference on 10th of April 2018.