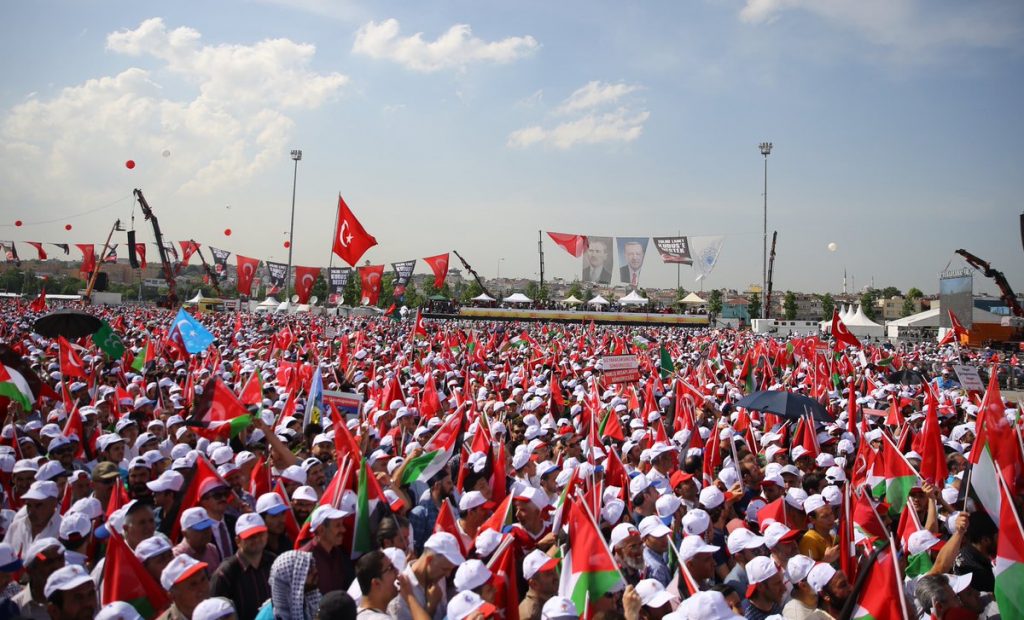 Turkish leaders are furious after more than 60 Palestinian protesters were killed on the Gaza border, but opposition cries hypocrisy.

There has been an unexpected let-up in the crush of valet parked cars and night time revellers that usually crowd our narrow Istanbul street. While our offices are in a part of town
that is coming up in the world, a downside is that even getting out the front door can be a tight squeeze. If only we didn’t have to thank the trigger-happy tactics of Israeli troops patrolling the far away Gaza frontier for this temporary respite.

It just so happens that further up our alleyway are the offices of the chief rabbinate. There are always policemen sitting outside in a guard box and the building itself is surrounded by high metal rails. This is not surprising given that the nearby Neve Shalom Synagogue has been the subject of three attacks in as many decades – the most recent a car bombing in 2003 in which 18 people – mostly passers-by, died.

The chief rabbinate, is also a two-minute walk from the pedestrian thoroughfare which was the starting point of a protest march against the Israeli action. And the police clearly feared the possibility that demonstrators might turn their ire against Istanbul’s remaining Jewish population – estimated to be a mere 16,000 souls. Up went the mesh fences to seal off our warren backstreets. The crowds are gone but we need to scale the barricades just to get to Work.

That Istanbul’s Jewish community might feel vulnerable in part reflects the love- and now mostly hate relationship between Turkey and Israel itself. Turkey was among the first (and certainly the first Muslim-majority nation) to recognise the State of Israel in 1949 but more recent history has been the one of ups and downs.

Despite its Islamist reputation, the AKP government of President Recep Tayyip Erdoğan was off to a good start with Israel when it first came to power in 2002, with business booming and a warm, high-level political visits cementing a growing rapport. Many Turkish Jews initially saw the AKP as being more inclusive. The previous old guard, despite its secularist guise, did not consider religious minorities – ethnic Jews, or Turkish-born Greeks and Armenians to be real Turks. The jury was then still out whether the AKP’s call for tolerance was meant for everyone or just themselves.

Then came the so-called “One minute” incident in 2009 – when Erdoğan walked off the stage at a WEF session in Davos after angrily protesting Israeli President Shimon Peres for a military offensive in Gaza that killed scores of Palestinians. The spell was broken. And what came next, an Israeli raid of a Gaza-bound flotilla in international waters in 2010, was perhaps the most serious crisis in the history of the Turkish-Israeli relations. The raid, which resulted in the deaths of 10 Turkish citizens on the ship Mavi Marmara, pushed the diplomatic ties into a six-year abyss marked by withdrawal of ambassadors and suspension of military cooperation.

Turkey and Israel looked as though they were finally letting bygones be bygones, after arduous talks in 2016 resulted in a deal. Then the killing on the Gaza border of over 60 Palestinians marking the 70th anniversary of the Nakba and protesting the opening of the US Embassy in Jerusalem sent relations tumbling down again.

The violence sparked a nation-wide outrage as well as a rare display of unity in an otherwise bitterly divided Turkish political scene. It also prompted a vicious tug of war between the two countries. President Erdoğan called Israel a “terrorist state” and described the bloodshed on the Gaza border as genocide, while Israeli Prime Minister Benjamin Netanyahu responded in kind, saying Erdoğan “well understands terrorism and slaughter” and was in no position to “preach morality to us.”

As the war of words escalated – so much so that Netanyahu’s son even posted an offensive image featuring the Turkish flag and the words “F..k Turkey” on his Instagram account – diplomats again packed their bags as the two countries asked each other ambassadors and consuls to go home and repent.

Hitting where it hurts?

There are those who concluded that the 2010 Mavi Marmara incident was an example of Turkey’s foreign policy being designed by public outrage rather than national interest. The same thing may be about to happen this time as opposition parties, with a 24 June election to fight are determined not to let the AKP make political capital out of Gaza. There has been universal condemnation of Israel and support for the Palestinians. Pro-Kurdish Peoples’ Democratic Party (HDP) leader Selahattin Demirtaş, campaigning for the upcoming elections from his prison cell, called for a rally to show solidarity with the Palestinians that should be attended by millions and supported by all presidential candidates. The main opposition Republican People’s Party (CHP) signed a joint declaration with Erdoğan’s Justice and Development Party (AKP) and its election coalition partner the Nationalist Movement Party (MHP) condemning Israeli aggression.

Erdoğan responded by calling a series of rallies, starting with a massive one in Istanbul on Friday, 18 May that will be joined by the MHP, to condemn Israel and show solidarity with the Palestinians. The government also declared a three-day mourning period and called for an emergency meeting of the Organisation of Islamic Cooperation (OIC) on the same day.
Erdoğan, political commentators suggest, is clearly hoping for a fillip to his not-so-energetic election campaign. His AKP has already described the Istanbul gathering as a continuation of the “Yenikapı spirit” – a reference to a rally on the exact same spot led by Erdoğan and joined by the MHP and CHP leaders in the immediate aftermath of the failed coup attempt of July 2016. The CHP, feeling its post-coup attempt support was exploited by the AKP to achieve its own and mostly anti-democratic goals, are sitting this one out. Critics and cynics alike doubt that the government’s verbal indignation will result in measures against Israel that would hurt business. An HDP proposal to call parliament back into session to discuss cancelling cooperation deals failed to get AKP and its ally MHP’s backing.

“Turkey is the only Muslim country that can actually ‘hurt’ Israel,” wrote İhsan Çaralan, a columnist for the independent opposition daily Evrensel. “But it appears that President Erdoğan and the government will respond through rallies that will not disturb Israel a bit, rather than by cancelling business, political and military agreements that will actually hurt Israel.” For journalist Ümit Kıvanç, the AKP and Erdoğan appears to have found a new source of motivation in the plight of Palestinians that they can use to create a “rallying ground and mobilization” for their supporters at home.

“Every time we criticize Israel, our trade ties grow further,” said CHP lawmaker Ömer Fethi Gürer on 17 May during a speech at Parliament. Gürer cited a formal statement from the economy minister, which showed that the volume of a bilateral trade with Israel rose from $ 4,3 billion in 2016 to $ 4,9 in 2017. “Instead of reacting with words, we have to review our
relations with Israel in the area of trade too,” he said. Others have pointed out the contradiction in allowing Israelis to visit Turkey visa-free while denying the same privilege to Palestinians.

When Erdoğan angrily rebuked Peres at the Davos saga, his popularity in Turkey and among the masses in Muslim countries hit an all-time high; so his severe criticism of Israel after this week’s bloodshed may polish his image among voters as the defender of Palestinians and the Muslim world. But turning the rhetoric into measures that will hurt trade can be costly at a time when Turkey’s economy is sending out signals of distress, as the current account deficit rises and the lira falls.

And there are now US relations to consider. Images of Ivanka Trump gleefully smiling at the opening of the US Embassy in Jerusalem next to photographs of injured Palestinians during
the Gaza border protests at the same time made the rounds in Internet and social media, making it hard for the AKP elites to overlook the fact that Papa Trump was very much complicit in the Israeli actions.

Erdoğan did point a finger and say that Netanyahu and Trump were both to blame for Palestinian deaths. But both he and the AKP seem reluctant to make the US take the brunt of their fury. This may have something to do with AKP’s euphoria when Trump was first elected. It was hailed as a “victory against the American deep state” and reflected AKP’s previous frustration with Obama. Turkish opposition Twitterati were quick to unearth the pro-government newspaper’s once ecstatic pro-Trump headlines. But the government is not so easy to embarrass, nor ready to burn all its bridges with the Trump administration. Erdoğan is clearly hoping that he can slug it out until election time with just one foreign opponent in the ring.

Photo:  Thousands attended a rally in support of Palestine in Istanbul, May 18, 2018.