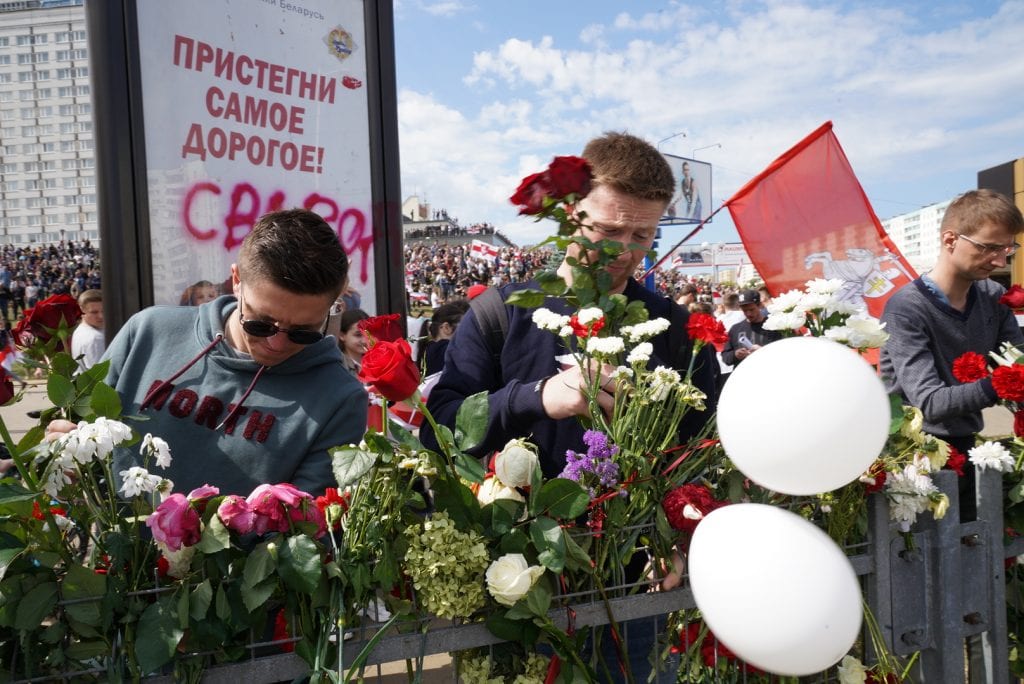 Flowers and firearms. Belarusians are united against police violence

What started as a post-election protest has become the popular uprising against longtime President Aleksandr Lukashenko.

In the last week, Belarus has seen some of the most extreme police violence in its modern history. First during the street clashes, when police have used live ammunition and firearms against demonstrators. Then as accounts spread of chilling torture of those in custody. Two protesters were killed, dozens are still missing.

It was the last straw for many. Instead of suppressing the demonstrations, injustice and brutality brought anger and defiance.

“I am no longer scared. Fear is a luxury we can no longer afford, since our friends and other peaceful protesters are being beaten half to death at detention centres,” says Maryia Yarosh, a 23-year-old translator from Minsk, who came out to the street holding a white rose. She says she has been participating in every protest since Sunday.

“The more brutality the police use, the angrier I become,” she adds.

More than 6,700 people have been detained since the election. The real level of it became clear when the internet connection was restored. Acutely distressing images and reports of police violence from the streets of Minsk and other cities have filled up Telegram channels and independent media.

In leaked audio files, screams and moans could be heard from inside the Akrescina detention centre in Minsk, where guards and riot police loyal to Aleksandr Lukashenko have beaten those caught up in the crackdown on recent protests.

Vladislav Karapuzov, 22, described being arrested by the special units and riot police on Monday evening. “They started smashing me with batons from the beginning, even before I was put in a paddy wagon. They beat me all over my body, on my back, legs, hands, face,” he says.

In the first 24 hours after his detention, the crowd of 80 men was held in a prison’s yard. They were given a loaf of bread and two bottles of water only once. Karapuzov was later placed in a cell meant for five people that eventually had 40 men inside. Right before his release, he and dozens of other detainees were forced to lie in the dirt while police kicked and beat them with truncheons.

“They told us to sing an anthem, threatened and humiliated. They thought we were paid for participating in the protests. They kept asking whether $20 is a good price for our health,” Karapuzov said. “I think it was done to scare people and prevent them from opposing again.”

Other people I met and interviewed in the past weeks across the country sent me images of their bruises after they were beaten by riot police. Violence was not limited to the capital.

After police beat up demonstrators, women took to the streets of Belarusian towns and cities demanding change. Since Wednesday, thousands of women have formed human chains to condemn a crackdown on protests. Many dressed in white and carried flowers as they called for an end to police brutality.

Work stoppages added momentum to the nationwide protests. Some of the largest industrial enterprises in Belarus announced general strikes. In the capital of Minsk, metro workers walked off the job in protest against violence. Workers at a sugar factory in Zhabinka have gone on strike, as have Hrodna Azot. The list is long. Their demands are political, not economic. Workers protest over the results of a presidential election and subsequent crackdown on opposition by the country’s government.

BelAz, one of the country’s largest and best-known enterprises which produces heavy industrial vehicles, was among the first to announce the strike.

Stas Dzmitrou, an engineer at BelAz, said it was a “chain reaction,” in which many large enterprises joined the nationwide strike one after another. When on Thursday, hundreds of BelAz employees stopped working and left the building, their managers threatened them “with troubles”.

“Of course, many workers are scared about losing their jobs. But when people are tortured and killed, how can we think about our salaries?” said Dzmitrou. On Thursday, it was his fifth consecutive evening of joining street protests in Minsk, where he headed straight after work. He said for the first time he is not scared, “because many people came out to the streets.”

On Friday, the Minsk Tractor Works, one of the biggest employers in the Belarus capital, went on strike and demanded Lukashenko’s resignation. He dismissed the strike, saying that only 20 people protested and then “turned around and went back to work.”

In reality, Evgeni Kashirin, who works as a welder at the plant, said he “never saw so many workers gathering outside the plant’s building.” He said that while many of his colleagues were scared, “people are angry and want Lukashenko to go.” He dismissed Lukashenko’s remarks as “another lie that he uses to keep his grip on power.”

Crowds of workers walked off the job and joined a massive rally calling for Lukashenko to step down. In front of a government building in Minsk, riot police put down their shields and were hugged by the demonstrators.

Belarusian on-air presenters have resigned in recent days from the state broadcasting company, fed up with ignoring police violence and silencing critical voices. During a large protest outside the building of state television on Saturday, hundreds of its employees announced that they are ready to join the nationwide strike. Lukashenko’s spokesperson Natallia Eismant and head of the national assembly Natallia Kachanava arrived to calm them down. This potential strike and walkouts are significant since state TV is a primary source of news for many Belarusians.

In the past week, protesters had to change their tactics literally every day. Despite internet shutdowns across the country, they were able to gather on the streets of their towns and cities. On Tuesday, when main roads were blocked in Minsk, and the city centre looked deserted, people came out in their neighbourhoods or near metro stations. Protests spread across the city – and the country – are harder to suppress.

The police also changed their strategy. Repressions became more targeted. Road patrol stopped and searched cars and pedestrians. Internal troops and special unit forces blocked metro stations. Minsk seemed to have been put under a blockade. It started to affect those who were not interested in politics before. Many had their relatives randomly dragged into paddy wagons and badly beaten.

Lukashenko has blamed criminals and unemployment for the mass protests that have swept the country, urging those taking part to “get a job”. But this level of repression is impossible to hide. Thousands across the country know that police have dispersed peaceful protesters with tear gas, stun grenades, water cannons and rubber bullets.

In the past weeks of massive rallies gathering in support of the main opposition candidate, Svetlana Tsikhanouskaya, I had the exact same thought that social and political tensions will reach breaking point when Lukashenko loses the information battle. He previously seemed to have lost reputation-wise, since a former housewife, who joined the race only because her husband, the original candidate, was arrested, became his main challenger.

When Belarus state TV channels reported that as many as 200 Russian militants had entered the country to prepare a terrorist attack, the crowd of more than 60,000 people gathered in support of Tsikhanouskaya in Minsk. They were not scared to come out. Many dismissed an alleged terrorist plot as “Lukashenko’s fairytale” to stop people rallying.

So, if people did not believe in alleged foreign intervention, what else will persuade them to support the leader?

In the past week, the people of Belarus showed their unity against police brutality. The protest is not only against Lukashenko. People are opposing injustice, and this is what blurred divisions that existed among them.