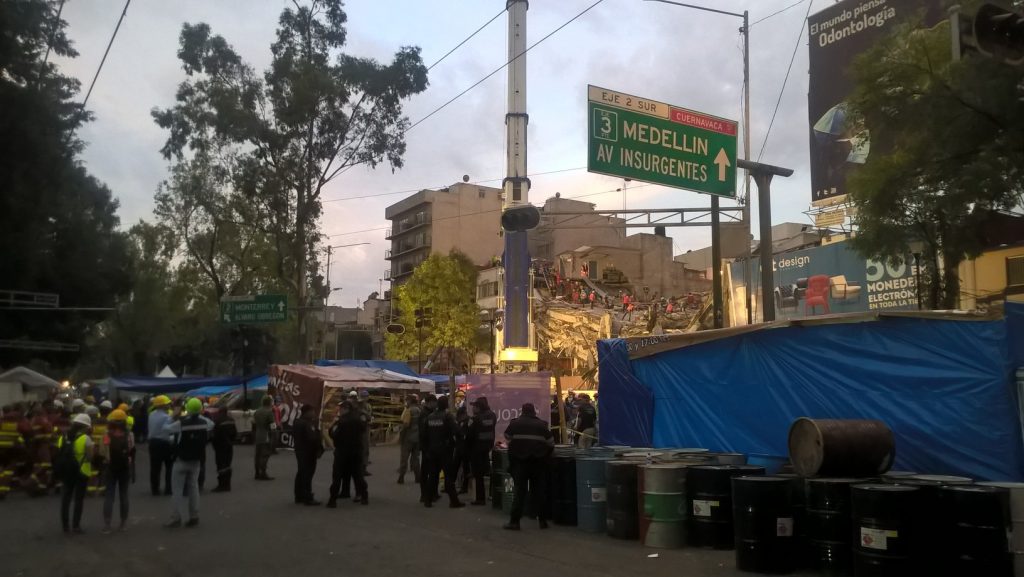 Earthquake in Mexico through the eyes of the residents

A multi-storey building collapsed on Alvaro Obregon 286, in a district located in the centre of Mexico City. There were 27 survivors and several dozen bodies were exhumed from the rubble. – The rescue mission is ongoing, but the chances of finding someone still living are small – says Alex, who has been a rescue volunteer for more than 40 years. He sleeps little, because every hour is worth its weight in gold for families who are waiting for information about their relatives.

Over 360 people died because of the 7.1 magnitude earthquake that struck Central Mexico on September 19. 36-year-old Lucy Zamora is one of the survivors from the collapsed office building at Olvaro Obregon. When the earthquake hit, she was going by the stairs on the third floor of the building. She quickly went to the back of the office, where there the security stairs were located. Halfway down the ceiling collapsed. After a few seconds she lay on the floor, and the concrete beam hung only a few centimetres above her head. She remembers that she had her legs put straight, and she could move her arms, but there were debris and broken glass around her. Her friend was lying a few meters away. He could barely breathe, so was she. Lucy was keeping a phone in her hand. She tried to call her sister right away, but there was no signal. She started to pray. When she heard the helicopters, she hoped they would find her. Silence was the worst.

Maria Cristina, Lucy’s sister, was concerned when she could not call her after the earthquake. Her sister worked in a district that suffered an 8.1 magnitude earthquake in 1985. Suddenly she heard in the news that the building where Lucy worked collapsed. She started to quiver in fear. After a while, she started to call hospitals and get any possible information about her sister. Finally, she went to the Álvaro Obregon street and found out that Lucy was on the missing list. She panicked, but she wore a helmet, a vest, and began to help to remove the debris. She does not know how she had the strength to move the buckets full of rubble. After some time, professional rescuers came and one of the officers asked her to leave the fenced area. However, she could not remain idle. She was trying to help, giving food and water to the volunteers and doctors. After 36 hours of waiting, she learned that her sister was alive and was taken to hospital. Maria Cristina started screaming with joy, and the people on the street were coming to embrace her.”

Clare Zagrecki has lived in Mexico for 19 years. – Nothing bad happened to me during the earthquake, but my friends from the USA were very worried. They called me to ask how they could help Mexico – she said. The same day they started to donate some money on her account. One person sent five hundred dollars, another one – a thousand. Together with Marlene Gomez, a Mexican friend, they bought thermal imaging cameras, protective helmets, mechanical axes, torches and handed them over to the rescue teams. – Within a few days we set up a social organization and organized a fundraiser via the Internet. The money will help the residents of small towns who have lost their homes – said Marlene. They look for people who need help. They do not want to cooperate with the local government and the police because they do not believe that the purchased items will be handed over to the injured.

Because of the earthquake, dozens of buildings have been destroyed and several hundred are threatened with collapsing. Thousands of people have been left without homes. Some live in provisional shelters, others sleep in cars or in tents near flats where they left all their belongings. – If someone took out a loan for an apartment in a bank and had it insured, he may demand compensation. However, I have been an owner of a flat for over 20 years. What will happen to me now? – Ana Maria worries. She and her neighbours want to ask the government for alternate accommodation, but they know it will not be easy. There are no subsidize or welfare housing in Mexico. Now, the government promises people only financial assistance, easier loans to rebuild damaged buildings and tax exemption if somebody wanted to sail the land where the house was located.