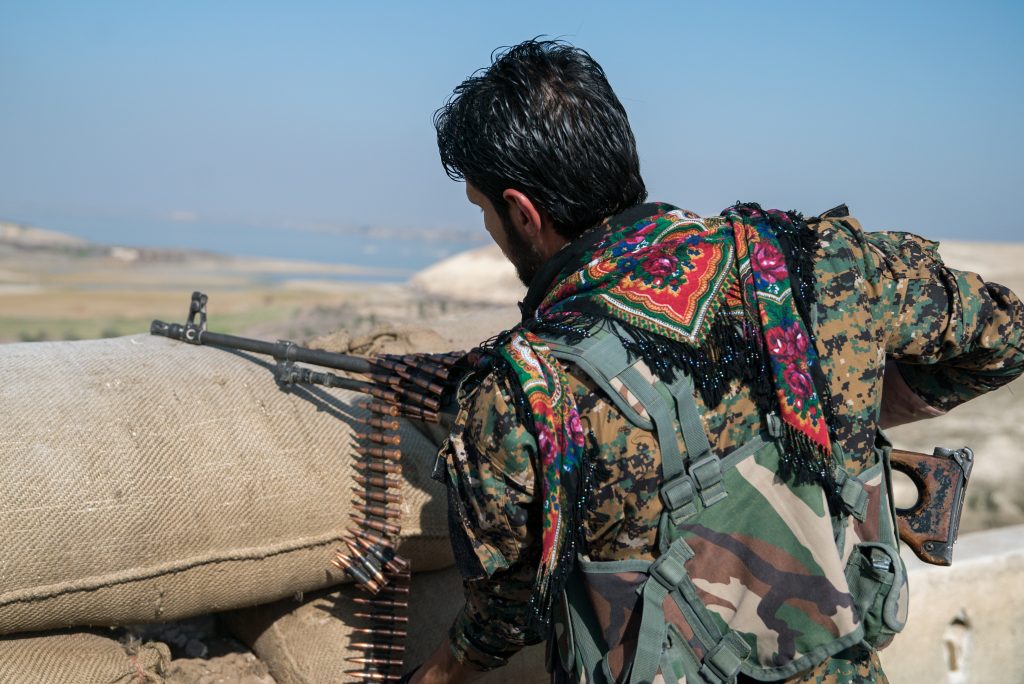 Turkey is making threats that it will attack other cities controlled by Kurdish militias. After Turkish forces had taken Afrin, Turkish President Recep Tayyip Erdoǧan repeated that this is not the end of the military offensive in northern Syria. Manbij is about to be the first aim. Erdoǧan also mentioned other Syrian cities controlled by the Syrian Democratic Forces (SDF): Kobani, Tell Abyad, Ras Al-Ayn i Al-Hasakah.

It is not the first threat of this type. However, it coincided with the declaration of the President of the United States, Donald Trump, who announced a soon-to-be withdrawal of American soldiers from Syria. On the contrary, the chairman of the Manbij military board, Mohammed Abu Adil, assured that the relationship with the international coalition has not changed so far.

– Our front line with the Free Syrian Army and the Turkish forces is regularly patrolled by the coalition forces – said Abu Adil. – The size of our coalition has grown after Turkey’s declaration about the possible attack on Manbij.

About 2,000 members of the US special forces and some military personnel are present in northern Syria. It is mainly the Americans who form the international coalition fighting against ISIS. Although more than 60 countries take part in the coalition, only a few battle actively. First of all, they provide an air support – a key factor in the fight against ISIS. It caused the loss of about 95% of the previously controlled areas by the self-proclaimed caliphate. At present, ISIS occupies minor territories in eastern Syria.

The jihadists have rarely been disturbed by the coalition in recent weeks. Between 23 and 29 March, the coalition forces carried out 11 attacks against ISIS: 7 in Syria and 4 in Iraq. In comparison, in the second half of 2017, while fighting for Raqqa, the capital of the so-called caliphate, a few dozen bombs were dropped from the air every day. Overall about 28.000 bombs were dropped on ISIS position during last three years.

The suspension of the operation in Syria was caused by the Turkish Operation Olive Branch. It lasted two months and was aimed at the Kurds. Due to the difficult situation, the Syrian Democratic Forces transferred most of its military units from eastern Syria to Afrin. It stopped the operation against ISIS.

On March 29, during a meeting in Ohio, Donald Trump declared that the United States is about to defeat ISIS and will soon leave Syria.

– Let other people take care of it now. We will be leaving soon – said the US President.

On March 30, the Wall Street Journal found that the White House froze over 200 million dollars located in the Syrian rebuilding fund. The funds were granted in February during the coalition meeting in Kuwait. Last year, the United States spent such amount of money for mine clearing and restoration of water and electricity in northern Syria.

In the firing line of the assassins

Attacks and assaults on local authorities have become regular lately. On March 23, Shervan Darwish, a press spokesman for the military board of Manbij, was wounded while driving somewhere between Manbij and Aleppo. Not much is known about what happened. Most likely, he was shot and now he is in the hospital. Darwish regularly participated in meetings with the representatives of the coalition. In turn, on March 14, in the city of Tell Abyad, near the border with Turkey, an important member of the Raqqa’s Civil Council, Omar Alloush, was murdered at his home.

The perpetrators were not identified in the case of the aforementioned tragic incidents. SDF accuses Turkey and the militias it supports. The Ertuğrul Brigade, which took part in Operation Olive Branch, claimed that it was responsible for the assassination of Darwish.

Will France replace the United States?

On March 29, the French President Emmanuel Macron met with the SDF delegation in Paris. He announced that France would support efforts needed to stabilise the situation in northern Syria.

According to the Kurds, it means enlarging the contingent of French forces in Manbij. However, the French side underlined, that there will not be any new military operation carried on.

Potentially France may increase its involvement in the coalition as Macron has previously repeatedly criticized Turkey’s activities in Afrin.

It did not take long for Turkey’s reaction. Deputy Prime Minister of Turkey, Bekir Bozdağ, wrote on Twitter that everyone who supports terrorists “will become Turkey’s target”. Anyway, all that diplomatic mess has not had any effect on situation in Manbij so far.

– The situation on the front line is stable. The fights are underway, but that is nothing new. The coalition forces are present here – said Abu Adil, the representative of military board of Manbij. He adds that, the US military has not organized any meeting regarding the withdrawal of troops yet. He emphasized once again that the situation is stable and the cooperation between Manbij military board and its foreign partners has not changed.