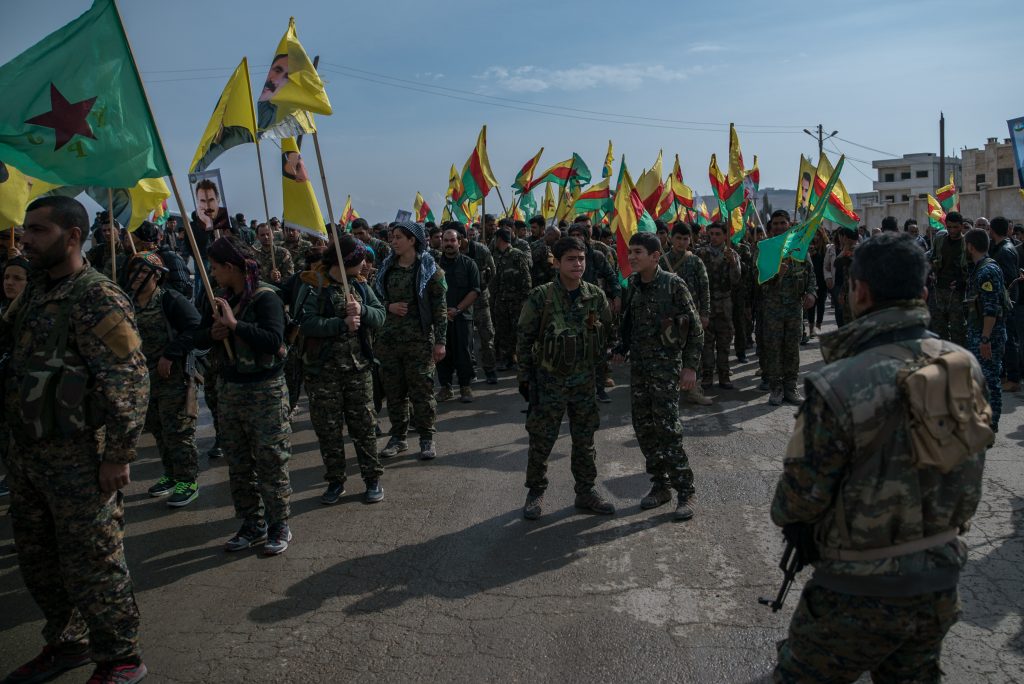 At least 2595 people (including over 1000 civilians and 373 children) died in Syria in February. The Syrian Observatory for Human Rights reports that almost two thirds of the death toll is the aftermath of bombings in east Ghouta. Fierce battles are also taking place in Afrin. The situation has not changed after the 30-day ceasefire was announced.

On February 24th, the UN Security Council unanimously adopted a resolution on an immediate ceasefire in the whole of Syria which was to take effect for 30 days. During that time humanitarian aid was supposed to be delivered to the areas which earlier had been considered too dangerous due to ongoing battles.

Since January 20th, the Turkish army and its supporting fighters (such as some of the groups belonging to the Free Syrian Army), have led an offensive on Afrin. It is an area in northern Syria controlled by Kurdish militias – People’s Protection Units (YPG) and Women’s Protection Units (YPJ). During the two-and-a-half month long offensive, the Turkish army and its allies managed to seize over 30% of the Afrin’s area. Sluggish at first, the operation began to gather momentum and the Turkish army was not stopped by neither the Syrian, pro-government militias (supporting the Kurdish troops in Afrin) nor by the adoption of the UN resolution.

The ceasefire does not apply to terrorist groups and Turkey considers YPG and YPJ to be such organisations because of their links with the Kurdistan Workers’ Party. In a telephone conversation before the adoption of the resolution, French President Emmanuel Macron told Recep Erdoğan, his Turkish counterpart, that the region of Afrin is also a part of the ceasefire resolution. In response to that, Turkey has accused France of spreading false information. That, in turn, triggered a sharp reaction from the United States.

“We invite Turkey to carefully read the text of the resolution of the UN Security Council. I really suggest that they do it”, said Heather Nauert, the spokeswoman for the US State Department during a press conference on February 27th.

Despite the ongoing battles, on March 1st the International Committee of the Red Cross managed to deliver humanitarian aid to Afrin. The convoy consisting of 29 trucks provided the necessities such as food, warm clothes, hygiene products, mattresses, blankets, medicines and water for 50,000 people in need.

Aid (not) for everybody

Russia has also failed to comply with the UN resolution. It has, however, announced its own ceasefire which does not work either.

On February 26th, the Russian defense minister Sergei Shoygu announced that by Vladimir Putin’s decision, starting February 27th, the so called humanitarian breaks will be introduced in east Ghouta. For 5 hours (between 9:00 a.m and 2:00 p.m local time) the forces of President Bashar al-Assad (supported by Russia and Iran) were supposed to withhold fire to allow medical help to be delivered through the so-called “humanitarian corridor”. That was supposed to allow the civilians to escape the encircled area under the protection of the Russian gendarmerie and the Syrian army. However, so far, none of the “humanitarian breaks” have taken place due to regular battles. Russia accuses the anti-government forces located in east Ghouta of preventing civilians from leaving the territory. Until March 4th only two children have managed to escape the area successfully.

On March 5th, the first humanitarian convoy reached the city of Duma in east Ghouta. It was the first one since mid-February. The United Nations has sent 46 trucks filled with food to help 27,500 people in need. The convoy was also supposed to include medicines and medical equipment but the Syrian authorities denied this kind of help. According to Reuters, because of that decision, surgical instruments, insulin and dialysis equipment will not reach east Ghouta.

In the following days help for the next 42,500 people is expected to arrive. This is, however, just a drop in the ocean as the besieged area is inhabited by around 400,000 people.

Turkey and its allied fighters seize more and more territories in the region of Afrin. The regime’s forces, supported by Russia and Iran, are also leading a successful offensive – in east Ghouta the militants’ defense is gradually being breached. According to the data published every day by the Syrian Observatory for Human Rights, the ceasefire is non-existent. On February 28th 129 people died in Syria, on March 1st it was 90 people and 64 more victims were reported the day after. There is no sign that this situation could change.

By mid-March the Syrian war will have lasted for 7 years. So far, at least 400,000 people died in its aftermath and 11 million (half the population of Syria) had to flee their homes.