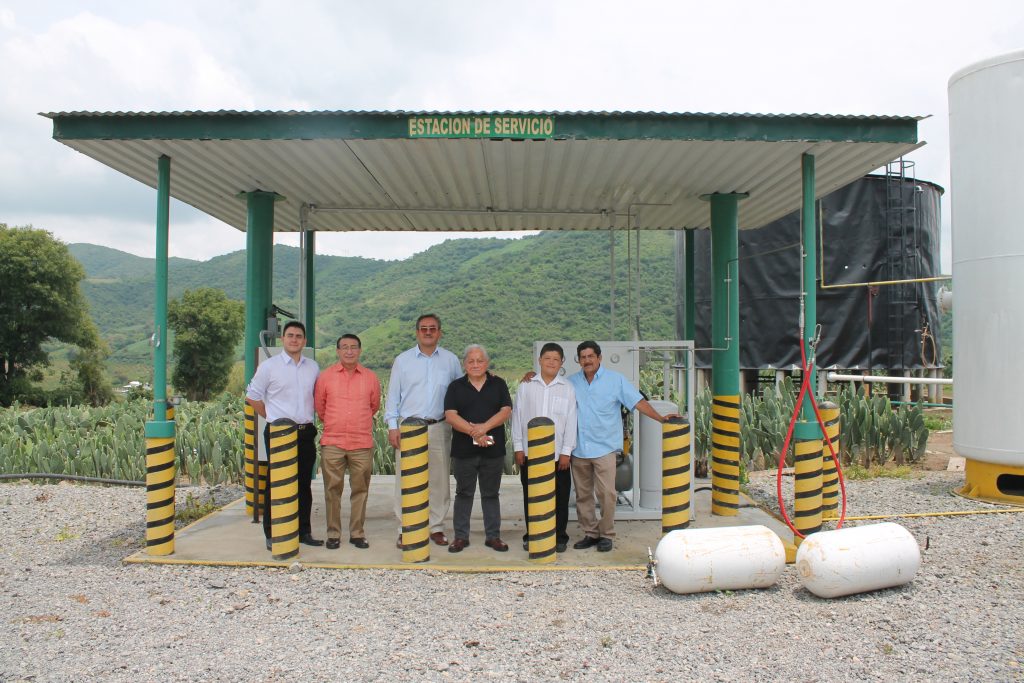 Cactus gas – an alternative to petrol?

I meet Miguel Avé and Rogelio Sosa López in the headquarters of a La Nopalimex company. It is located on the outskirts of Zitacuaro in the Mexican state of Michoacan. The enterprise became famous for an invention using an inconspicuous plant – cactus. Biogas extracted from one of its kinds, nopal, has a potential to replace petrol in the future.

The men show me around a small refinery where they process the cacti. After that I witness something unique – world’s first station with nopal biogas where you can refuel your car.

Honorata Zapaśnik: You are the inventors of biogas extracted from nopal. How did you come up with the idea of working on this project?

Miguel Avé: Years ago I was writing my thesis on solar and wind energy. I have been working on generating biomass from corn, sugar cane and yucca for years but I think that nopal biomass is the most generous one because cacti can reproduce quickly. When I met Rogelio, who was producing tortillas at that time, I encouraged him to start a cooperation. In Mexico, a hectare of land can yield up to 100 tons of cacti. However, thanks to hybridization we have managed to create a kind of plant that gives us between 600 to 800 tons of nopal on the same land area. This makes the project profitable. The second important reason is the amount of biogas that is obtained from a tonne of nopal – up to 100 cubic metres.

What do you use the nopal gas for?

Miguel Avé: In the building next door we have a company with machines that produce tortillas. That’s why we also use this biogas to preheat the ovens, then generate electricity and in the final phase, when it is more purified (and contains 97% methane), it can be used as a fuel. At the moment, biogas can be used by both small cars and buses. The town hall officials will also have biogas cars, we have an agreement with them. Many taxi drivers and companies that have to deliver their products to other cities are also interested in it because it is at least 30% cheaper than petrol.

Rogelio Sosa López: A litre of petrol costs 20 pesos (approx. 1 euro). The cost of a cubic metre of biogas, which has similar properties, is 12 pesos. In 2016, our invention was granted a patent and I have been driving a nopal gas car for two years now.

Miguel Avé: The patent meant a lot to us because one of our employees stole the results of our research and sold them to a large company that wanted to patent our biogas at the same time. We had to confront them.

Rogelio tanks the the nopal gas and starts the engine of his car. He asks me to get closer to the exhaust pipe. I lean forward and cannot feel any exhaust fumes.

Rogelio Sosa López: We had to make minor changes to the engine of the car and install a gas cylinder just above the trunk. My cylinder has 15 cubic metres of gas which gives my car a 150 kilometers range. We are working to make it more efficient so that one 1 cubic metre is enough to cover 40 kilometers. I feel very pleased that I no longer have to use a petrol station.

Is this type of biogas safe for the environment?

Miguel Avé: During the process of its generation, it does not have polluting effect. In addition, all green plants absorb carbon dioxide and this cactus absorbs a much greater amount of carbon dioxide – as much as 70 tonnes per year. The more we use it, the cleaner our environment will be.

Rogelio Sosa López: At the moment, we have a small refinery but, depending on the demand, refineries as big as Pemex may also be built (Pemex is the largest fuel producer in Mexico). We are about to open a new refinery in Uruapan. This is a massive scale project. We have already found a serious investor.

Miguel and Rogelio lead me to a cacti field. We stand in the middle of one bed. Nopal grows as far as the eye can see.

How did you manage to find a new kind of cacti?

Rogelio Sosa López: We used a generic bank with different cacti to create a species that would produce biogas. In 2007 we started experiments in the laboratory of the Institute for Electrical Research. Their experts did a research and confirmed that it was possible to generate energy from nopal but they were not able to assess whether it would be profitable. We knew that it will.

So not all cacti can be the source of energy?

Miguel Avé: No, not all of them. In Mexico there is one kind of cacti that people consider to be a vegetable. That nopal is good for people but it is not a source of energy.

Miguel breaks one of the cactus leaves in half and shows it to me.

Miguel Avé: Our nopal is called esmeralda. It can grow to reach large sizes and weight as much as 9 kilograms. As you can see, it has almost no needles. It contains a lot of minerals and sugars. It produces energy and after two months from planting it can be eaten by people.

Rogelio Sosa López: Nothing is wasted. The outcome of the entire gas production process is a liquid and waste. This is thrown into the organic fertiliser to product a compost from it. As a result, nopal grows faster.

Are you satisfied that after years of work you have managed to invent a kind of gas that can help our environment?

Rogelio Sosa López: I never expected the nopal could be so wonderful. I didn’t use to like cacti, it seemed like a weed to me. I didn’t know why it was growing. Today I love it more and more every day.

Miguel Avé: Our project focuses first on the social aspect and providing work to people. This way, the migration of the local people can be avoided, as they can start to cultivate nopal themselves. It also creates wealth and is environmentally friendly. It is an alternative for our country. We have kerosene, but its use is coming to an end. In states such as Campeche, Veracruz, Tamaulipas, Tabasco the land was destroyed by oil companies. If nopal is planted in those places, the soil will become fertile again.