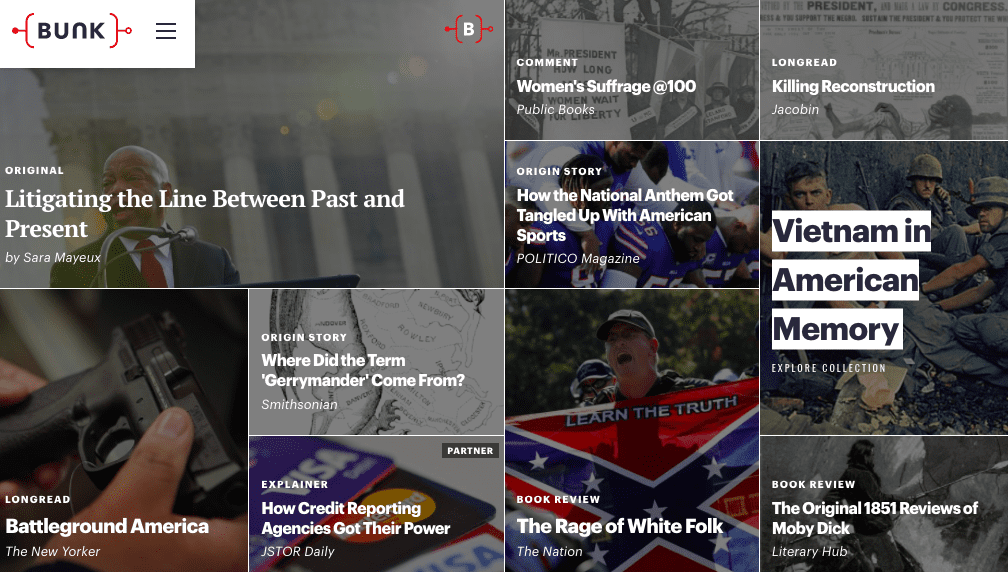 “We wondered what it would mean to build a machine that thinks like a historian.”

Why’s my kids’ daycare so damn expensive? Turns out that anti-communist fears of Soviet–style government-run childcare play a role. How strange it that Donald Trump is blasting NFL players on Twitter? Well, it might be a stupid use of a president’s time, but it’s not new for politics and race to be intertwined with football. Did social media get people so interested in #eclipse2017? Nope, “eclipse madness” is real in America, dating back to at least 1878.

The disparate stories above have something in common: They wouldn’t be found in most textbooks, but they all relate to how a better knowledge of history can help us understand the present. That’s the goal of Bunk, a new site run out of the University of Richmond and originally envisioned by its former president Ed Ayers, who’s also one of the hosts of the popular history podcast BackStory.

Ayers teaches a history class for freshmen, “Touching the Past,” that he also sees as a lab to see what students just starting out in college know and think about history. “They don’t think about it very much at all. It was a subject in high school that involved a big textbook and multiple-choice tests,” he said. “It soon became clear that any representation of the past was visible to them only to the extent that it was visible on their phones and computers. Seeing it week after week got me thinking: If the goal is to introduce people to how cool history is, I’m gonna have to begin with online.”

It certainly wasn’t that Ayers was some stranger to the internet — he launched his first website, about the American Civil War, all the way back in 1993 — but now he envisioned a site that would think about history in a new way. “There were these cool articles in Slate, in The Huffington Post, that would kind of use the past to talk about today. None of it was labeled as history,” Ayers said. The site that he envisioned would combine the best of these articles, along with original content, to create a fuller picture of the past and how seemingly modern problems generally have historical roots.

Bunk, which takes its name from the 1916 Henry Ford quote that “history is bunk,” launched in beta earlier this month. “A big part of this project is amplifying what’s already out there online,” said Tony Field, the site’s editor. “There’s so much great work being done online by scholars already. That includes blogs, conversations on social media between historians — there’s a very active community of historians on Twitter — not to mention all of the great digital archives all over the place, and digital humanities work based at universities and elsewhere. We were very interested in what it would mean to try to harness all of that energy and make it accessible to a broader audience of people who aren’t, say, historians on Twitter.”

Content is presented in a mosaic format on the home page, featured in “Collections” on specific themes (“Monument Wars,” “Immigrants Not Welcome”), and searchable by theme (Money, Power, Family). The aggregated content includes a few paragraphs on Bunk’s site, then you click through to the publisher’s original site to finish. One big part of the vision is to highlight connections between disparate pieces of media. “We wondered what it would mean to build a machine that thinks like a historian,” Field said. The algorithm that links together related articles on the site is enabled by a team of student workers tagging content by theme, people named, timeframe, and place. “Can we replicate the experience of sitting with somebody who has training and a deep level of knowledge as she reads the newspaper?” Field said. “What sort of connections would be taking place in the mind of somebody like that, and can we share that experience with our audiences?”

In coming months, Bunk — which is supported by the University of Richmond — will bring on a number of section editors to start curating more collections of content. The goal, in the next year, is for at least a quarter of the content on Bunk to be original (the site is accepting pitches). Right now, “somebody reading Slate might not be reading Smithsonian, might not be reading a blog about Civil War memory. We all have our taste in history,” Ayers said. “But we think that somebody who’s writing that blog, for instance, would benefit from a Slate reader being directed to it.” In that way, he hopes, the sites can “generate audiences for each other.”

“We’d love to be a go-to site for people who are interested in understanding the world in something of a deeper way,” said Field. “That said, we are committed to bucking the current trend of giving audiences more of what they know already. We are interested in experimenting with these algorithms that feed content based on what people are reading, customizing the user experience around their activity — but not just giving people more of what they want. Surprise, serendipity, unexpectedness are key parts of this.”

Photo of the Hard Hat Tour of Ellis Island by Forsaken Fotos used under a Creative Commons license.