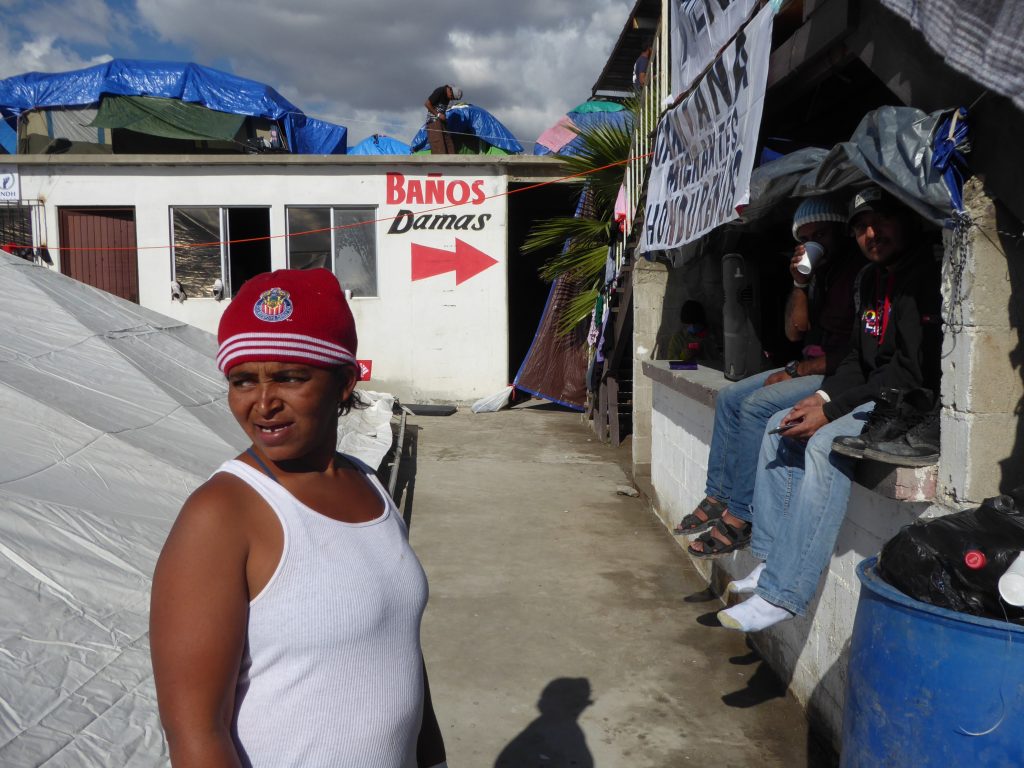 On every third Saturday of the month, Border Angels’ activists go to the Imperial Valley desert, along the Mexican border. They leave bottles filled with water and some clothes during winter. They leave all that in places where immigrants cross the Mexico–United States border illegally.

Border Angels members have developed six routes – starting with the easiest one, reaching 2 kilometres into the desert. Only a few can bear the 10-kilometre march.

Enrique Morones, the head of the San Diego Border Angels organisation, looks like a retired athlete. He is wearing a sweatshirt, black sweatpants and sneakers. He has got lots of charisma while talking about his activities for the foundation. Before Morones started to get involved in helping others, he worked as marketing department director of San Diego Padres, American baseball club. However, he is most known for helping illegal immigrants in the US.

According to Enrique Morones, his program of water supplies has gained popularity since the presidency of Donald Trump.  – I have started to receive hundreds of emails. Retirees, students, businesspeople, lawyers even school groups write. Everyone wants to get involved because they are opposed to Trump’s anti-immigration policy. Our business has never been as risky as it is now – Enrique Morones explains, referring to a sentence issued by a federal court in Arizona in January. The local judge found guilty the members of the No More Deaths , who left bottles of water and some food in the border reserve in Arizona. Activists who help illegal immigrants are threatened with up to six months in prison and a fine of $ 500. Tanya Benitez, an activist for Border Angels, said in an interview for the Washington Post, that the day after the trial in the District Court for the District of Arizona, the received a warning from the Bureau of Land Management California State Office. Before each desert expedition members of the are to inform the office about places where they will leave bottles filled with water.

The risk of legal problems does not deter the Border Angels volunteers, among whom there are many Mexicans with American citizenship. Stephanie Luna Padilla, PhD student at the University of California, Santa Cruz, is one of the activists.

– A trip to the desert is always a massive challenge for me – she says. – I will never forget when there were 46 degrees Celsius heat last summer, and we had to walk there. There was only cracked earth and clothes scattered around. Once I stumbled across a lacy bra. I didn’t even want to think about what could have happened there. After an hour walk, I began to feel worse and worse; perhaps I had the first signs of a sunstroke. However, I kept repeating myself that I’m not alone here, and I can make a phone call. We can call for help at any time. Illegal immigrants going by the same route have to manage on their own – Stephanie says.

In addition to the risk of death from exhaustion, lack of water and food, immigrants are exposed to gang attacks.

It happens that a smuggler who was paid by an immigrant to help him reaching the United States arranges an attack on him – says Enrique Morones. – It’s all about extorting money. If the immigrant promised to pay $ 6,000 for crossing the border, the gang attacking him demands the same amount from him. The victim is pushed into a kind of debt spiral. If he manages to reach his destination safely, he will have to pay it off for years. If he is late with the payment, the smuggler can harm his relatives who still live in his homeland. The smuggler knows where they live, and he is in touch with them. It probably sounds naive, but three generations ago smugglers had their own rules. They accompanied the immigrants on their journey to the States; they were their guides. Today, it is just a dirty business controlled by organised criminal groups.

A fight over the wall

Illegal immigration is one of the top stories in the United States during the presidency of Donald Trump. Last year, the entire world saw photos of Central American immigrants who were detained by the United States Border Patrol on a charge of the illegal border crossing. The situation of separated families was particularly dramatic – adults were then sent to detention centres and their children to government centres. American president signed a decree ending the practice of separating families under pressure of human rights defenders and the international community. His flagship project, however, is the construction of the wall on the Mexico–United States border. Congress consistently refuses to finance this enterprise. Donald Trump is so determined to get it his way that he did not hesitate to introduce a partial federal government shutdown at the end of last year, which lasted 35 days. It was one of the most extended shutdowns in the history of the USA.

The construction of the wall, which is a symbol of the fight against illegal immigration, does not go hand in hand with the current situation on the American border. As shown by a think tank based in Washington, the Pew Research Center, the number of illegal immigrants crossing the American border hits a record low levels. Over the past dozen or so years, there has been a decline of almost a half: while in 2002–2007 there was an average inflow of 715,000 persons per year, in the years 2011–2016 it was on average 386,000 persons annually. As the authors of the report point out, it is related to the tighten controls on the Mexico–United States border, as well as to the worse condition of the American labour market. At the same time, the number of immigrants who reach the United States legally is increasing over the years. Many of them decide to stay illegally in the USA after the expiration of their visas. The next migration trend is the increase in the number of people applying for asylum. In 2018, almost 93,000 people attempted to ask for asylum in the USA – a rise of 70% compared to 2017.

The caravan of refugees from Central America

For decades the most numerous group of illegal immigrants crossing the American border were the Mexicans. According to the Pew Research Center think tank, Mexican immigrants are no more on the top of the lists of those arrested by the US Border Patrol. In 2000, about 1.6 million illegal immigrants from Mexico were detained. In 2017 it was only about 130,500 people. Nowadays the citizens of the Central American countries such as Honduras, Guatemala and El Salvador are the most often detained. In 2017, according to the statistics of the US Customs and Border Protection, almost 163,000 citizens of those countries were arrested at the Mexico–United States border. Among them, lots of families with children and under-aged immigrants travelling unaccompanied. Everyone wants to escape poverty and gang violence in Central America. In Honduras itself, due to the unstable political situation and the operations of criminal gangs such as Mara Salvatrucha (M-13) or Barrio 18, there were 43,6 murders per 100,000 people in 2017. Only in El Salvador people were murdered more often – 60 deaths per 100,000 people in 2017. Honduras is also at the forefront of the poorest Latin American countries. According to the World Bank data, over 60% of Hondurans live in poverty.

The symbol of the dramatic situation in the Central American countries became the caravan of migrants, which in the autumn of 2018 was heading towards the Mexico–United States border. The march of several thousand people from Honduras, Guatemala and El Salvador coincided with the Congress election campaign. The elections took place in November. Donald Trump’s Twitter account was full of anti-immigrant entries to gain support among the Republican electorate. The US president threatened the countries of the region with the abolition of financial aid and deterioration of relations if the caravan reaches the US border. The Republican party managed to keep the majority in the Senate after the midterm elections, so the thing of the caravan went down on the President’s Twitter. The situation on the on border, where several thousand migrants from Central America got stuck, became a top story again at the end of January. It was due to the implementation of the plan “Remain in Mexico” – immigrants who applied for asylum at the US border have to wait for the date of the interrogation in the American immigration court. Before all the asylum procedures in the US come to an end, they can get stuck in Mexico for up to several years.

– People are getting more and more desperate – says Hugo Castro, a coordinator working for the Border Angels , who has been delivering food and other necessities to several immigrant shelters since the crisis in Tijuana. One of them is El Barretal, a camp located in Mariano Matamoros, one of the most dangerous districts of Tijuana.

– Immigrants staying there can become easy prey for drug cartels or smugglers offering help in getting to the US  – says Hugo Castro. – Some decide to get there on their own. After crossing the Mexico–United States border illegally, they surrender to the US Border Patrol and declare that they want to apply for asylum. However, sometimes it happens that despite the procedures provided for in American law, officials send immigrants back to Mexico – adds Hugo. Tijuana has always been a city attracting newcomers dreaming about life in the United States. However, with the arrival of the caravan from Central America, the situation became really dramatic.

Czytaj również
Minsk: decentral strike
Communality: a response to deforestation?
Inside Nagorno-Karabakh Conflict
Pandemic: the Belarusian Stories
Telegram reality: how the messenger influenced the Belarusian protest
IT sector in Belarus: How was it born?
The Belarusian Inquisition
The Revolution Will Be Advertised
“I’m going out.” A courtyard where change is born
A church-led initiative shelters trans women in Buenos Aires’ slums
Fleeing the Syrian war to war-torn Nagorno-Karabakh
Mass testing for coronavirus in Slovakia
Favela vs Covid-19
Moria’s blaze chronicles and the next day for the refugees of Europe
Catalonia on trial
Rojava Diary
Flowers and firearms. Belarusians are united against police violence
Waiting for a move
Biopirates of the Indian Ocean
Lukashenko may be announced the winner. But his victory won’t last long