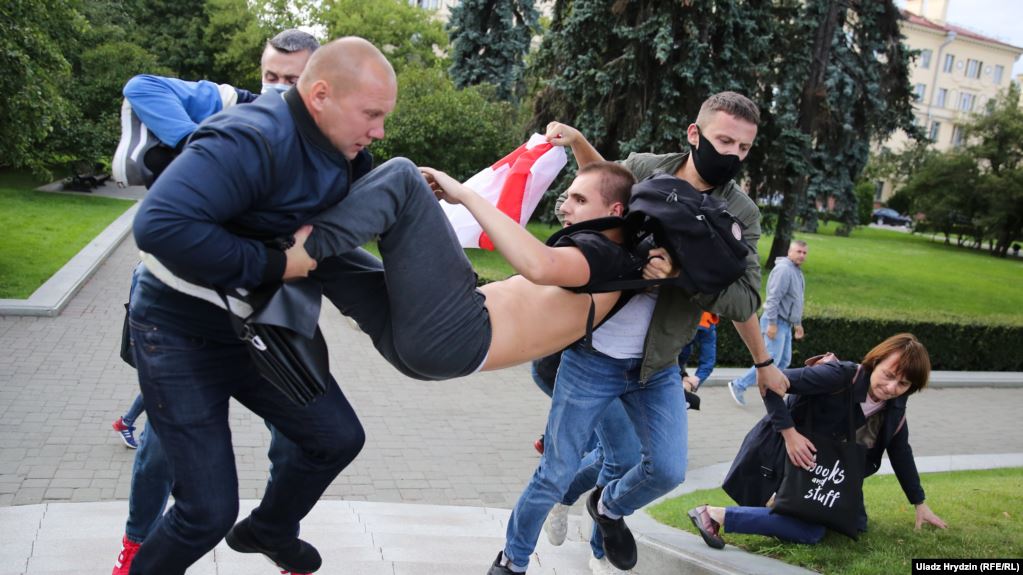 Belarus bans two opposition candidates from running in elections. People are fighting back

More than 250 people were detained in violent clashes in Minsk and other cities across Belarus, according to the Interior Ministry.

It started with an elusive message posted on several Telegram channels:

There was no previous organisation or mobilisation, and no additional information was given. But hundreds of Belarusians took to the streets in Minsk after two main challengers were disbarred from the poll. Rallies also took place in a number of provincial cities including Brest and Gomel.

Pedestrians, cyclists, and motorists participated in solidarity actions with political prisoners and those arrested in the past months. They were mostly silent. Protesters occasionally broke into rounds of applause, while passing drivers honked their horns in support.

In Belarus, cycling and clapping can be subversive.

Police responded with excessive force. The internal troops were deployed to the city of Minsk. In videos taken by local residents, plainclothesmen and special police forces brutally arrest protesters and bystanders, shoving them to the ground and beating them with batons.

More than 250 people were detained across the country. It includes more than a dozen journalists who work for local and foreign outlets. Reporters who were live streaming from protests became special targets – they were detained while being on air. Dozens of thousands could watch it live.

But people fought back. In several cases, protesters clashed with the police.

One video shows crowds of people defending a man who was beaten while lying on the ground. Protesters hit officers with bare fists. The man was eventually released and managed to escape. It is a rare image in Belarus, where demonstrators are largely peaceful. The country has no tradition of violent clashes with the police.

As I recently wrote, “the human capacity for patience and endurance, in the face of blatant injustice, is not without limits”. Aggressive law enforcement tactics intended to impose order are instead inflaming tensions. Violence is difficult to accept, when people feel they are the majority that was unfairly treated. Such tensions are visible in other cities.

There is no reaction from police chiefs on the actions of officers seen on the disturbing videos, when they brutally attack demonstrators. Instead, a criminal case was initiated against some of the protesters who fought back.

The central election commission’s decision not to register the most popular candidates has its rationality, despite having provoked another wave of protests. It is a predictable decision for Lukashenko, an idiosyncratic autocrat.

Imagine: Viktar Babariko and Valery Tsepkalo, two main Lukashenko’s rivals, are registered for the election. Although Babariko, the former banker, is jailed and cannot continue campaigning personally, his candidacy would have mobilised his supporters. His campaign collected more than 430 thousand signatures in support of his nomination; it is an absolute record in Belarus. It would have been hard to convince voters that their candidate lost to the incumbent in the election.

The same is true for Valery Tsepkalo, an entrepreneur and former diplomat. Thousands of signatures endorsing his candidacy were thrown out.

It already happened in 2010, when tens of thousands of protesters flooded into central Minsk on an election night, when Lukashenko was re-elected with nearly 80 percent of vote. Protesters claimed the election had been rigged. Police beat them with batons and arrested hundreds, including alternative candidates.

This year, the stakes are higher. Frustrations with the government have reached provincial towns across Belarus that never witnessed political protests before. It is leaderless, bottom-up and widespread discontent that has been on the rise in the past years. It has reached boiling point due to a weakening economy, bungled response to the coronavirus and overall dissatisfaction with Lukashenko, who has ruled the country since 1994.

It is a new situation for President Aleksandr Lukashenko, whose own rating has collapsed right before the election. The true level of support for the president has been kept secret. But a leaked poll conducted by sociologists at the Belarus Academy of Sciences in March and April showed that only 24 percent of the Minsk population trusts Lukashenko. The data was later officially confirmed by the institution.

Lukashenko cannot offer any solution to the current crisis, except police force. And so the authorities are trying to exclude any chance for a well-organised, mobilised protest on the election day. For them, suppressing several hundred demonstrators one month before the election is seemingly easier than dealing with thousands of angry voters who would demand a fair result on August 9.