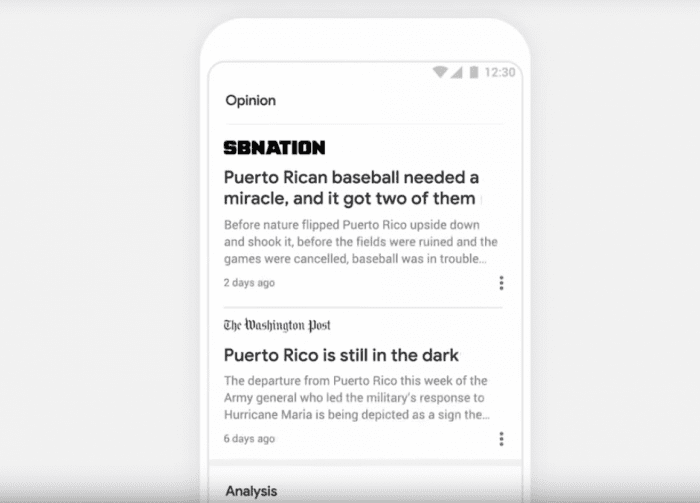 Google announced a shiny new iteration of the Google News app on Tuesday as part of its I/O developer conference (here’s a good collection of all the other announcements from I/O, which runs until Thursday). Google News has started rolling out and should be available to basically everyone by “next week”; the app will replace the existing Google Play Newsstand and News & Weather apps.

Here’s Google’s demo of what this looks like on mobile, if you’re not seeing the update yet. Google says it’s analyzing news and information using a “new set of AI techniques” (👀👀👀).

Among the features Google is highlighting:

— A five-story “For You” briefing, which responds to your reading habits, and includes local sources (“the more you use the app, the better the app gets”). The customized briefing was available in Google Play Newsstand as well, after a November 2016 overhaul of the news reader. The first two stories are the same for all users, followed by three stories tailored to your browsing interests and behaviors, a spokesperson confirmed.

— If you see a story you want to read more about, you can tap into “full coverage,” and Google will show you other stories “reported from a range of sources,” a timeline of events, the social conversation around the topic (Donald Trump tweets, anyone?), as well as other related pieces it’s categorizing into “opinion” and “analysis.” This is all entirely AI-driven, according to a Google spokesperson, so no human curation involved. Users will likely see items from any news outlets they are subscribed to, marked as “from subscribed sources.”

The new Google News will use AI to classify articles into Opinion, Fact Checking and Analysis sections. That’s great—if the AI gets it right. 🤷 #io18

— The new Google News will have Twitter Moments-like/ubiquitous “stories” format (which Google is calling “a unique visual format called newscasts”):

Google is launching a new feature in Google News: Newscasts. It gives users a preview of the story to “get a feeling of what is going on.” #io18 #io2018 https://t.co/W2q390Tjmc pic.twitter.com/Cyp4P4SxH8

— For those who don’t want the personalization, there’s a separate “Headlines” section, that highlights news stories and all that related fun stuff from above, but not personalized. Consider all your filter bubble concerns addressed.

An algorithm fed by a “couple hundred signals” surface these trusted sources, the Google spokesperson said.

— The “Newsstand” section of Google News features publishers more prominently, with subscription information. Google’s been working with some publisher partners on a “Subscribe With Google” payment process, and will be showing in a user’s search results relevant articles from news outlets the user is subscribed to.