A populist may win presidential elections in Mexico 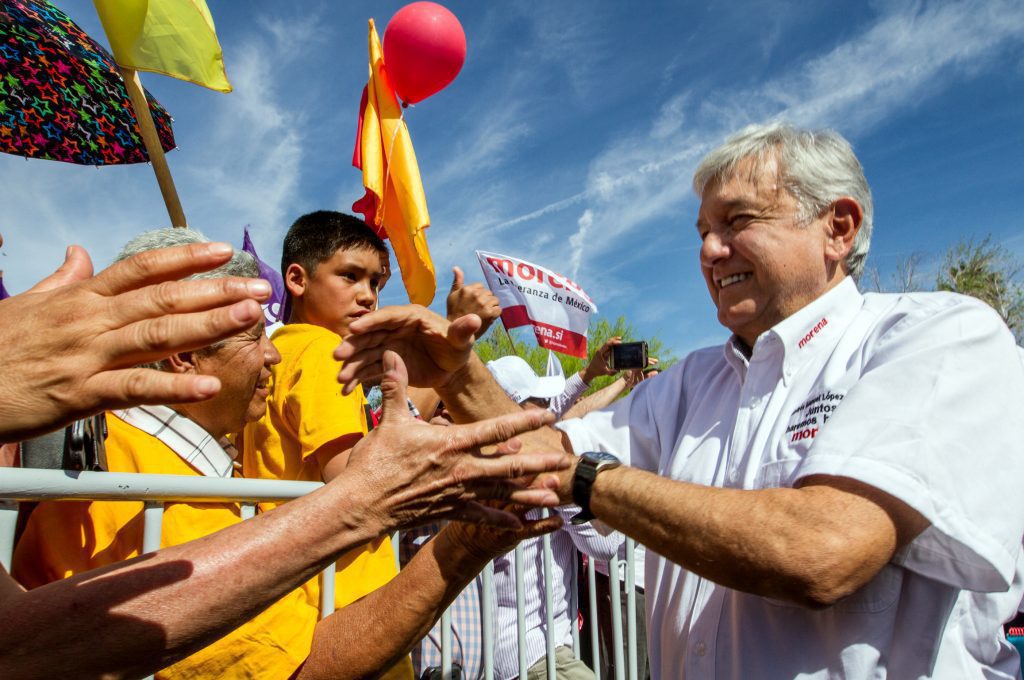 Andrés Manuel López Obrador, the most controversial candidate in the presidential election in Mexico, has just begun his third campaign. – We will demand respect for the Mexicans – he announced during his first campaign meeting in Ciudad Juárez, on the border of the United States. – Mexico and its inhabitants will not be a toy of any foreign government. – The leftist candidate is considered as a favourite of this year’s elections, which will take place on July 1.

Some are glad, some are scared

According to the latest opinion poll, 37% of voters want to support Obrador and currently he leads electoral polls. There is a lot of hope for him winning the presidential election, but many are worried. The leftist candidate wants to reduce the privileges of big companies and the political establishment. He also plans to fight corruption. He promises to take back tax reliefs and improve the living standards of the poorest. The publicists compare him to Hugo Chávez, the former President of Venezuela, who significantly weakened the economy of his country.

“For many businessmen and the representatives of political class, López Obrador, who claims that Fidel Castro was just as important as Mandela, is a terrifying prospect. Mainly because he is against structural reforms implemented by President Enrique Peña Nieto, especially the opening of the energy sector to private investments” – wrote the Financial Times in January.

At the same time, a large part of the Mexicans, especially the poorer ones, believe that there is no better candidate. People are fed up with the growing crime rate, inflation and corruption of politicians of the ruling PRI party. The government is unable to cope with it. At every possible opportunity the press laughs at the current President, Enrique Peña Nieto, who is considered a puppet in the hands of party colleagues and the least articulate President of Mexico. Journalists like to recall the Guadalajara International Book Fair when Nieto could not name the titles of three books he had read. On another occasion he was asked how much the minimum salary in Mexico is. He replied, “he is not the lady of the house”, so he does not know that. Moreover, Peña Nieto cannot oppose the aggressive politics of Donald Trump, who wants to deport Mexicans from the United States, insults them on Twitter, plans to build a wall on the border with Mexico and threatens that his country will withdraw from North America Free Trade Agreement.

He has no real assets and gets by on salary

López Obrador proves in his tax returns that, unlike other presidential candidates, he has no real assets or even a car and earns 50,000 pesos per month (about PLN 10,000).

– What I value most is honesty. I have no material goods. What I had, a flat and and three houses, I gave to children – he said.

He started his political career as an activist of the Institutional Revolutionary Party (PRI), which ruled Mexico for more than 70 years (1929-2000). He was also the director of the Indian Institute in Tabasco. That was when he probably became interested in the plight of the poor.

In 1989, he joined the Party of Democratic Revolution, which was formed after the split of PRI. Five years later he ran for the position of the Governor of the State of Tabasco. In 2000, he was elected a mayor of the city of Mexico. Despite his radical political views, he did not do any harm during that time. He built roads, introduced a small, common pension for the elderly who did not have social security. He also prepared a support program for the disabled and introduced free school supplies for children from public schools.

– López Obrador also began to restore the historical centre of the city of Mexico after years of neglect. He removed street sellers with the support of Carlos Slim, the richest Mexican – says Alejandro Muñoz, an architect.

During his tenure, the city’s debt grew by less than 9% (much less in comparison to previous years). Despite critics’ accusations that he did not fight corruption and he should have spent money on courts, police and public transport, he left the office with the support of 84% respondents.

– Even if the money was not always well spent we saw the effects, the city was changing. You can’t say that about the previous mayors. – Obrador is defended by Ana González, a resident of Mexico City.

In 2006, López Obrador lost the presidential election with Felipe Calderón by 240,000 votes. He claimed the election was rigged by the government and declared himself a legitimate President. Six weeks his supporters were blocking Paseo de la Reforma – the main street in the capital. They organized protests and marches. At the time, López Obrador lost the support of many businessmen.

Loyalty is the worst enemy of decency

The PRI party realized López Obrador is a serious presidential candidate and he has a strong support of a party he has just started – National Regeneration Movement (Morena). So, the PRI decided to put up José Antonio Meade, a Doctor of Economics, who has been working in the public sector for years. He has not been an active politician so far, but the voters do not really believe that he can be an independent President.

“It is worth remembering that José Antonio Meade is loyal to the PRI, and loyalty is the worst enemy of decency. So ask yourself what do you think about him, if his candidature promises further corruption”, wrote Denise Dresser, political scientist, on her Twitter profile.

The next candidate, an independent one, is Margarita Zavala, the wife of Felipe Calderón, the former President of Mexico. Many people think the is responsible for starting the war with the drug cartels, in which over 200,000 people have been killed.

A real competitor for López Obrador seems to be a 39-year-old Ricardo Anaya, the candidate of coalition For Mexico to the Front. He focused on women’s rights and promised to fight domestic violence in his presidential campaign.

– It is not normal that women, having the same competences and doing the same job, earn between 20% to 30% less than men – he said.

López Obrador has a 10% advantage over him in electoral polls, but he is aware that voters may change their minds at the very last minute. He is trying to improve the image and he is more restrained so as not to discourage the middle class. However, if one considers his previous declarations, he sends ambiguous messages. He organizes meetings with the accused of corruption leaders of the trade unions (the trade unions have a strong position in Mexico). At the same time, he tries to talk to the most influential businessmen in the country promising them cooperation. He confirms he will not allow to build a new airport, but the construction has already started. Anyway, the results of López Obrador’s activity will be seen in three months’ time.

Photo: Andrés Manuel López Obrador, the candidate in the presidential election in Mexico. The photo is a property of the Xinhua Agency.

Duolingo has got a lot of heat lately overseas. The online platform has been offering free language learning around the world for seven years. It has become possible because all courses are created in cooperation with volunteers. , the co-initiator of the project, says – During the first three years of operation we have provided […]
Honorata Zapaśnik
Mexico, North America, South America

The caravan of refugees crosses Mexico

– The members of the immigrants’ caravan are not gang members or terrorists, like Donald Trump, the President of the United States claims. They are citizens who are looking for a chance for a better life – says Alden Rivera Montes, ambassador in .
Honorata Zapaśnik
Mexico, North America, South America

The Maya peoples were the first to process cacao beans. They were making a bitter drink for the rich ones and for the purpose of ritual. A few centuries later sweet chocolate was made. – What we consider chocolate today is a synthetic product with a chocolate taste – says David Sánchez of the Museo […]
Honorata Zapaśnik